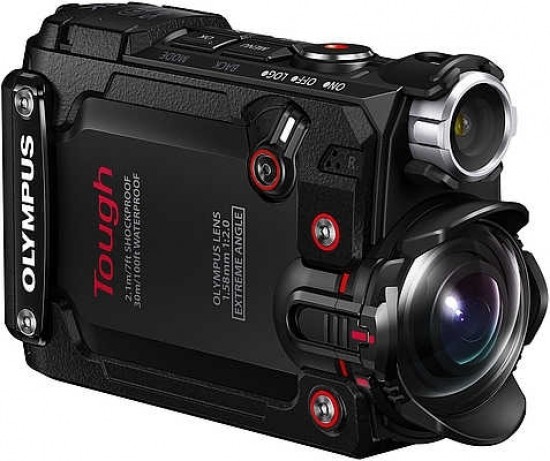 Looking for a toughened camera and action camera combined – one that needs no additional outer casing for use in the dirt or the wet? Olympus has a long history of reinforced ‘Tough’ branded models stretching back a decade, of which the stills and video shooting TG-Tracker is the latest iteration; or, perhaps more accurately, evolution. In publicity pictures its industrial design makes it appear angular and chunky – so it is something of a shock to unbox the camera and discover that it’s no bigger than a regular pocket matchbox.

Its ultra compactness – it measures just 56.5x35x93.2mm – means that this Olympus immediately sits very comfortably in the palm, or anywhere else for that matter. The other obvious lure is the promise of 4K-video capture at 30fps for the first time in the series (along with Full HD or HD footage), with a new TruePic VIII processor on board to crunch through all that inevitable extra data. GoPro has long been the leader when it comes to action cameras however – so can this Olympus attempt to knock it from its perch and challenge the status quo?

This time around the Tough series camera’s credentials are that it is shock-proofed to withstand a drop from a height of 2.1 metres, crushproof, in that it is theoretically able to survive a weight of 100kg placed upon it, dustproof (and as we discovered sandproof, to the extent of being able to withstand at a day at the beach and be washed clean of grains afterwards), freeze-proof down to -10°C, plus waterproof to depths of 30 metres. So, unlike certain action cameras from competitors, including most GoPro’s, you don’t need to concern yourself with investing in a protective outer case in addition to the camera itself. At its heart is a small 1/2.3-inch CMOS sensor boasting 7.2 megapixels.

Living up to its ‘Tracker’ name, if using the free Olympus Image Track Ver 2.0 ‘app’, users can review outdoor adventures with info including altitude or depth, air or water temperature, geo-location and direction, plus speed of movement, via convincing-looking on-screen illustrations. With five-axis image stabilisation on-board to prevent blurred stills or video when not only camera but also camera operator is in motion – so matching its manufacturer’s OM-D models in that respect - the camera even logs changes in G-force.

Such gimmicks aside, this Olympus also seeks to fulfill creative needs and multi angle shooting requirements too. It comes with a detachable grip (provided in the box, along with wrist strap, mains plug and USB cable – the latter the means by which the camera’s battery is internally re-charged), wide angle lens offering 204° point of view – so we had to be vary careful to avoid fingers straying into shot – and flip out LCD monitor. This screen is tiny by current standards at just 1.5-inches in size, and cannot be rotated, which means we found it tricky to accurately compose and review in bright sun light. The resolution isn’t marvelous either, at just 115,200 dots. Of course, the alternative of a larger screen or eye level viewfinder would have added to the bulk – but we’d have liked one nonetheless.

Unsurprisingly, given its diminutive dimensions, the only removable media option here is microSD card, just like on our smartphone… while a bright, shiny, lime green livery (an alternative black bodied TG-Tracker is also available) ensures that the camera stands out, despite its small size, meaning you’re unlikely to misplace it. It weighs 180g, which whilst light enough for us to be able carry in the pocket of our beach shorts, still feels reassuringly sturdy in terms of build when gripped in the hand, or dropped into the swimming pool.

With deceptively basic controls and operational levers large enough to be operated with wet hands or wearing gloves, the layout of the TG-Tracker is somewhat akin to a point-and-shoot stills compact meets a camcorder. Quick to power up via a flick of the simple ‘on/off’ lever at the side, the tiny LCD screen by current standards is located on the opposite flank of the body, where it can be swung out at a right angle, whilst the goldfish bowl-type lens sits at the narrow end of the body, cine camera style, a headlamp offering 60 lumens of brightness sits above it. The opposite (back) end of the TG-Tracker is the location for the connectivity ports and lithium ion rechargeable battery, including media card slot. This sensitive area is protected against grit or water ingress by a chunky door, open or shut via ridged latch – ridged, presumably, so that it can be slid open or shut whilst wearing gloves or with wet fingers.

As one would expect with a toughened camera, operation is of the point and shoot variety so owners can concentrate on the thrills and spills at hand. There is no zoom option or unnecessary plethora of creative effects built-in here – what we see or can readily access is pretty much what we get. This is a device constructed to serve its niche purpose – shooting in conditions that would cause other cameras to give up the ghost. So while it’s most definitely not a replacement for your CSC or DSLR, it will allow you to get pictures where a CSC or DSLR wouldn't without some form of additional protective casing. Here the Olympus wears its own endoskeleton.

That said a smattering of camera accessories is included in the box with the TG-Tracker – including detachable handgrip with screw thread, joint screw and mount coupling. A USB lead and mains plug is further provided and the means by which the camera’s lithium ion battery is recharged within the device itself. This is good for 300 shots from a full charge, or 90 minutes duration, which, whilst no great shakes, is still comparable with the power performance of your average CSC. Squeeze the shutter release and you don’t see the camera adjusting focus before the shot is taken – but you do get an affirmative beep that it has happened, whilst there is a counter on display whilst the video is being recorded to likewise reassure it’s still working after multiple drops and soaks.

Also included with our review sample of the camera were a couple of lens protectors – one was already affixed to the camera when we got it – whilst the other is provided for the purpose of using the unit underwater.

If there was one thing we found a bit of a faff regarding operation of the TG-Tracker it was that there is no dedicated ‘play’ button for immediately reviewing shots and videos. Instead you have to tab through the ‘mode’ screen and select that particular option. We also kept forgetting whether we need to press ‘mode’ or immediately adjacent ‘menu’ button to find what we wanted – for example the set-up menu falls under the mode options, where we find the more expected photo, stills, time lapse and playback selections.

But what of the pictures and video it captures. Are they up to scratch or only worthy of deletion?