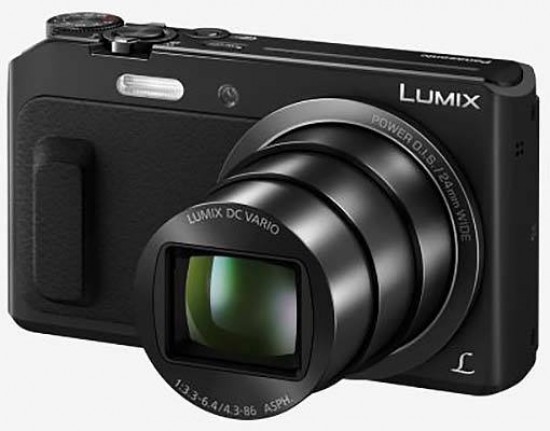 The Panasonic Lumix DMC-TZ57 (also known as the DMC-ZS45) is pitched as a travel camera and was announced at the same time as the TZ70, being a more affordable version of that camera.

It has a 16 million pixel Live MOS sensor, along with a 20x optical zoom which offers an equivalent of 28-560mm in 35mm terms. A digital zoom is also available which doubles that focal length.

Unlike on the TZ70 there’s no viewfinder, no ability to shoot in raw format, and the zoom itself is not as lengthy (the TZ70 offers 30x).

The Panasonic Lumix DMC-TZ577’s three-inch screen tilts all the way forward and is designed to appeal to selfie-lovers, but it is not touch sensitive. Other specifications include full HD video recording, inbuilt Wi-Fi and the ability to take full manual control over settings.

You can find smaller 20x optical zoom compact cameras on the market than the Panasonic Lumix DMC-TZ57, but it’s still pretty pocket friendly (so long as your pockets are fairly loose). On top of the camera you’ll find a mode dial which allows you to change between the various exposure modes on offer. There’s the usual semi-automatic and manual modes (P/A/S/M) as well as intelligent Auto, Scene, Creative Control, Panoramic and two slots for groups of custom settings, which you can use if you like to often shoot one particular type of scene.

Also on top of the Panasonic Lumix DMC-TZ57 is the on/off button and a dedicated Wi-Fi button. These are placed a little too close to each other and it can be very easy to press the Wi-Fi button when you’re trying to switch the camera on, which can be a little frustrating.

The shutter release button can also be found on top of the camera, surrounding by the zoom switch for extending and retracting the lens. This is quite a smooth mechanism and allows you to get from one end of the focal length to the other quickly and easily. If you’ve got digital zoom switched on, the lens will pause briefly before entering the digital realm of the zoom - good news if you’re keeping an eye on only using optical zoom.

Moving to the back of the Panasonic Lumix DMC-TZ57, you’ll find all of the buttons grouped on the right hand side which makes it very easy to use with just your right hand. There’s a four way navigational pad, with each directional key assigned to a particular function. Left controls self-timer, up accesses exposure compensation, down switches on or off macro focusing, while right accesses flash functions.

Just above the navigational pad, you’ll find a button labelled Exposure. You use this to allow you to use the directional keys to alter shutter speed, aperture, or both. Since there’s no control ring around the lens as you will find on the TZ70, you must press this first. Once you have, pressing the up and down key controls shutter speed (if you’re in shutter priority or manual mode), while left and right controls aperture (if you’re in aperture priority or manual mode).

Next to the Exposure button is a playback button. Once you’re in Playback, you can press the up button to enter a “Retouch” section, where you can add a digital filter to your image. Both the original and the new image with the filter will be saved. Above the playback button, you’ll find a dedicated video record button - it’s a little indented, making it difficult to accidentally press and waste memory card space with accidental video recording.

The final two buttons on the back of the Panasonic Lumix DMC-TZ57 are a display button, which gives you various viewing options, such as activating a rule of thirds of grid, and a Quick Menu button. This button gives you quick access to a range of often used settings, such as sensitivity (ISO) and white balance. It would be nice if you could customise this menu if you find you’re not using everything within it all that often, but you can’t. The Quick Menu button doubles up as a delete button when in playback, or as a Back button when scrolling through menus.

For making more extensive settings, you can head to the Menu, which is accessed via the button in the middle of the navigational pad. This menu is fairly sensibly arranged and doesn’t take too much getting used to once you’ve investigated it for a while.

One of the settings you’ll find within the quick menu is autofocusing mode. Sadly, there is no way to set a single specific autofocus point which is a little frustrating for a camera which has complete manual control otherwise. Your options are to let the camera choose from one of 21 points, to use a central autofocus point and focus and recompose or to use Face Detection or Tracking AF modes.

The Panasonic Lumix DMC-TZ57’s screen tilts forward to face the front of the camera on what feels like a pretty secure hinge. By doing this, self-portrait mode will be automatically activated - but you can switch this off via the Main Menu if you prefer. Self-portrait mode means that a three-second countdown timer will display before the shutter is released, giving you time to pose for the portrait. There are also skin smoothing and background defocus options which you can switch on or off. The tilting screen is not only useful for self-portraits, but also for other awkward angles, such as if you’re shooting from very low down. As it doesn’t tilt the other way, it’s not useful for shooting from above, though.

If you want to get a little bit creative with your shots, the Panasonic Lumix DMC-TZ57 affords you a couple of different options. There’s a filters mode which gives you the choice of 15 different options, such as Toy Camera and One Point Color. You simply scroll to the filter you want to use and press OK - some of the options have subsets you can choose from, such as Cross Process which offers different cross processed style colours. As there’s no raw format shooting available on the TZ57, if you shoot with a filter, you’ll be stuck with it down the line if you change your mind.

Another creative option is the panoramic mode. Simply select this on the mode dial and then you can pan the camera across the scene while holding down the shutter release button to capture an ultra wide angle of view.

It’s no surprise to see Panasonic include inbuilt Wi-Fi on the Panasonic Lumix DMC-TZ57. This allows you to shoot remotely, or to send images across to your phone or tablet for quick sharing on social networks, via email and so on. The first time you connect the camera to your phone, you can speed the process up by scanning the QR code displayed on the camera’s screen from within the Panasonic Image App. This skips the need to input a password, and from then onwards the connection should be instant.

Unfortunately, Panasonic has placed some limitations on what you can control from the app when using the Wi-Fi. Frustratingly, you can see some key settings, such as white balance, are greyed out meaning you can’t change them. Instead, you can control the zoom, exposure compensation and self-timer. It’s useful to an extent, but it would be nice to have been able to make more changes if you wanted to.

Focusing speeds are generally good, especially when shooting in bright light. You can switch to macro focusing if you’re trying to get close to a subject to fill the frame - it’s pretty impressive how close you can get and the camera still manages to focus.