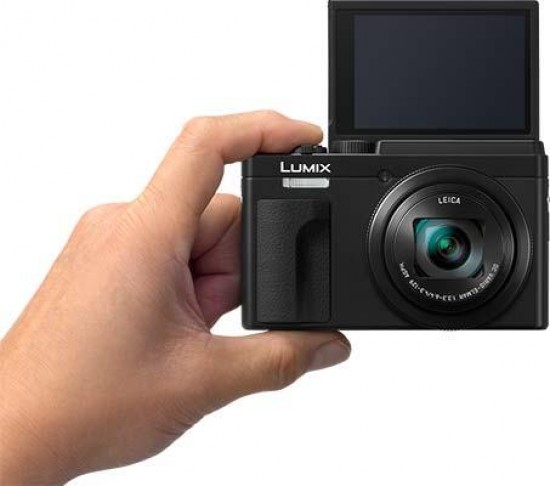 Panasonic’s perennial travel zoom – or ‘TZ’ – series of compact cameras has received an upgrade in the shape of the Lumix TZ95, which comes with a Leica branded 30x optical zoom lens, 20.3 MP resolution sensor and 4K video shooting capability. Of interest to long time followers of this range is the addition of a tilt-able 3-inch, 1040K-dot rear monitor, as well as brand new high resolution LVF (Live View Finder), that here is a teeny 0.21-inches in size, meaning you have to squint to view it.

With connectivity options including the expected Bluetooth and Wi-Fi, the TZ95 is at the time of writing available in the UK at a manufacturer’s suggested £399.99, in either black or black and silver body options; we had the former smart looking option sent to us for review.

While all the above spec is pretty much a must-have for a compact digital camera released in 2019 – whereby said camera needs to sufficiently differentiate itself from smartphones and tablets to be worth buying, while simultaneously staying familiarly close to them in terms of operation to stay approachable and ‘current’ – it’ll come as no surprise that this is pretty much a pimped up point-and-shooter, ‘thanks’ to a small, standard-issue 1/2.3-inch sensor at its core.

That said, when you want something light, portable, easy to use and reliable when sightseeing travelling, there’s no disgrace in simply pointing and shooting. First impressions are then that the Panasonic Lumix TZ95 ploughs a familiar (perhaps over-familiar) furrow, but nevertheless fits a long-standing brief: namely offering quality pictures from the convenience of a pocket-sized, all-in-one package.

With a core lens reach starting out at a wide-angle 24mm equivalent (stretching up to 720mm at the telephoto end), the Lumix TZ95 is certainly suitable for capturing a broad range of photogenic subjects, and in particular proves a decent option for landscapes and cityscapes, as well as street photography and group portraits. We were able to shoehorn the vast majority of subjects into frame without having to step back and bump into a fellow sightseer, or into the road and the path of passing vehicles.

The camera itself looks relatively boxy and chunky when ranged against the average mobile phone it will inevitably be competing with in today’s market – in no small part due to that generous 30x optical zoom, which retracts within the body when not in use; said lens encircled by a lens control ring, to which certain key settings can be pre-assigned (or said lens ring simply provides another means of adjusting the zoom/your focal range when in intelligent iAuto setting).

Handily, to enable steadier shooting and the avoidance of blurred images, a decent sized (for a camera of this ilk) leather-effect rubberized handgrip is provided at the front, alongside an indented thumb rest at the back. This enabled us to hold the camera pretty rock steady with just the one hand (if not always steady enough to avoid image blur in lower light, as we’ll read later). Also compensating for camera shake is Panasonic’s on-board Power OIS optical image stabilizer.

The other features to be found on the Panasonic Lumix TZ95’s faceplate are a narrow window housing the flash that sits just below the Lumix logo. Unfortunately the flash is in a position where your forefinger can very easily obscure it when gripping the camera with the right hand – so that’s something you need to be aware of, especially when handing the camera to someone else to take your picture, as well one might when travelling. Nestled next to the lens meanwhile, where it is out of the way of stray fingertips, is a familiar AF assist /self timer lamp.

From the front of this Lumix then, with a size broadly similar to a jumbo box of matches, the aforementioned zoom lens dominates proceedings, offering up to that generous 720mm equivalent reach at the telephoto end. In operation it takes around 3-4 seconds for the lens to glide from maximum wideangle to extreme telephoto, accompanied by an unobtrusively low mechanical buzz. Although picture detail inevitably softens at maximum zoom, the results are still plenty sharp enough for it to prove a useful asset. It goes without saying that the camera is responsive enough to avoid your attention ever needing to wander from the subject itself, with an AF speed given of 0.1 seconds, allied to a maximum burst capture rate of 10fps in AF-S mode or 5fps in AF-C mode.

The top plate of the Panasonic TZ95 is likewise familiar and straightforward in terms of layout and operation. The shutter release button is raised and encircled by a lever for operating the zoom, so you can’t mistake what it is, next to which are two smaller nail-head sized buttons, flush to the bodywork. These are for turning the camera on or off, or commencing video recording – said function denoted by the familiar red dot.

However, if you’re operating the camera in a darkened environment, like a concert hall or theatre, the proximity of the main power and video buttons means that it is easy to mistake one for the other and turn the camera off when you actually meant to start recording. Again, familiarity with the camera over time helps such mistakes to be avoided. Commendably this Panasonic is swift to power up in any event, being ready for action in around two seconds, its lens extending from its position flush to the body to arrive at its extreme wide-angle 24mm equivalent setting.

The other prominent ‘button’ atop the Panasonic Lumix TZ95 is a shooting mode wheel, which offers just the right amount of resistance and ‘give’ to avoid nudging it accidentally, yet making it easy to turn to a wanted setting in an instant. Here we find the familiar likes of program, auto, shutter priority and aperture priority modes, along with a very easy to use (and get pleasing results from) panoramic setting. There’s also a custom mode, a dedicated manual video mode, intelligent auto mode (iA mode) for pure point-and-shoot operation, the usual digital effects mode (with here eight options selectable) plus scene / subject mode, the latter providing the usual pre-optimised settings to again enable decent results from just pointing the camera and clicking. This mode wheel nestles next to a slightly raised section that houses twin microphones for recording sound.

Moving around to the Panasonic TZ95’s backplate, in terms of composing and reviewing shots there’s the standard 3-inch LCD on the back plate and the teeny electronic viewfinder above, which has its own dioptric adjustment wheel adjacent to aid us occasional spectacle wearers. Although an EVF is a cool feature on a camera you can comfortably drop into a jacket pocket, it’s so small on the TZ95 that subject detail is difficult to ascertain – meaning that we found ourselves not really bothering with it, unless particularly bright sunlight made viewing subjects via the larger screen otherwise tricky.

The stated resolution of the eye-level finder is a whopping 2.33 million dots, though you wouldn’t recognise it as such. The fact that the alternative of the 1,040K-dot resolution 3-inch LCD is of the flip up through 180° variety – so that it can be used for selfies, or when you too want to slide yourself into a group portrait – does however make itself occasionally useful. This is a travel camera after all, and you’ll undoubtedly want to record the fact that you were there too.

The screen is touch sensitive, to a degree, though as there are also plentiful physical controls ranged alongside it that provide much the same functions, we didn’t find ourselves utilising its touch sensitivity that much. We did however enjoy the fact that the EVF (or, as Panasonic prefers, LVF) has an eye sensor alongside it, which deactivates the larger LCD and switches on the EVF as you bring an eye up to it. There is also a dedicated ‘LVF’ (live view finder) button that lets you disable this feature if required, or switch between screens manually.

Photo enthusiasts will also love the fact that – of course - Raw files can be captured on the TZ95 alongside, or in tandem with, JPEGs, and without any noticeable slow down too in terms of operational speed in regular single shot mode. This being a Panasonic camera, we get the inevitable 4K photo mode to further ease the possibility of capturing the exact shot we want by being able to grab an 8 megapixel still from a 30fps sequence. Otherwise the 20 megapixel maximum resolution is probably as high as you want from a bog standard 1/2.3-inch chip – and for the most part, in available light, the images largely shine.

The other buttons on the Panasonic Lumix TZ95's back plate form the usual mix of function specific controls, plus a central pad with a scroll wheel encircling it provided to provide speedier operation. We liked the fact that the display button to its lower right calls up the compositional aid of a spirit level – ideal for helping to get horizons straight when shooting landscapes, even if bright sunshine sometimes makes it tricky to see with certainty when the thin horizontal provided positively illuminates in green.

Another very useful button is provided bottom left of the four-way control pad; this provides the superb shortcut of a quick menu when we’re in shooting mode (otherwise it doubles as the equally useful delete button when in playback). Here we can quickly scroll through the various essential shooting options and select the particular one required with a finger tap onscreen.

Choices here include picture styles – switch from standard or natural to vivid or monochrome, for example – as well as being able to select the flash mode in use (with red eye reducing options provided alongside forced flash and slow shutter sync), select video quality, or choose image aspect ratio (from the standard 4:3 to medium format apeing 1:1).

Naturally, image quality can also be selected via this quick menu rather than having to scroll through the TZ95’s main menu screens, with the ability to capture Fine (maximum) quality JPEGS alongside uncompressed Raw files, as we did for the duration of our two-week camera evaluation period. Auto Focus can also be swapped from single shot to continuous shooting, and the camera biased towards either an impressive 49-area AF, subject tracking or face and eye detection.

Ranged around the backplate’s four way control pad itself are, from 12 o’clock on the dial and moving clockwise, various settings for adjusting exposure compensation (a generous +/- 5EV), flash settings, self timer or drive mode, plus focus settings, including auto focus, auto focus macro and manual focus, with focus peaking provided so you can check the intended sharp portion of your image is indeed sharp.

While at either side of the TZ95 are located lugs for attaching the provided wrist strap, we also get a built-in speaker on one flank for playing back audio, while the opposite side provides mini HDMI and USB ports, protected by a plastic flap raised via fingernail. There is no dedicated battery charger provided in the box with the camera – rather a USB lead and mains plug – which means that the battery is charged in-camera rather than outside it, as tends to be more and more the convention these days.

Battery life is a claimed 380 images per charge, which is fair and allows you to easily fill up the SD media card in use, which also slots into the base of the TZ95, particularly if shooting Raw and JPEGs in tandem. The camera, like many of its ilk, can be charged via its USB port.

So, while operationally the Panasonic Lumix TZ95 is pretty up to scratch and fulfills most of our expectations, what is the case when it comes to image quality? Is a big zoom on a small camera over-egging the pudding or capably fulfilling demand? Read on to find out...