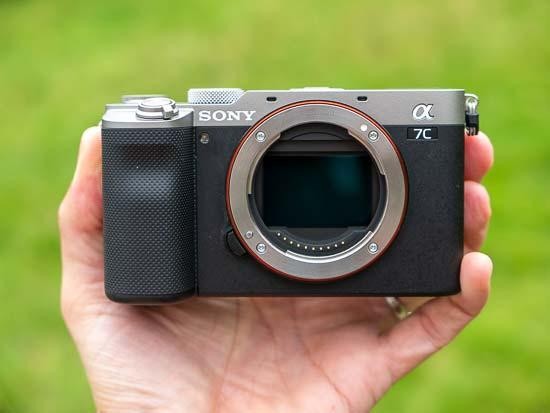 The new Sony A7C combines the full-frame A7 III with the APS-C A6600 to create the world's smallest, lightest 35mm full-frame camera. And therein lies both its main appeal and its achilles heel - it is both an engineering marvel and surprisingly already rather out-dated, both in terms of handling and specification.

The "C" in the product name stands for "Compact", and the Alpha 7C is certainly that, somehow squeezing a full-frame sensor, an IBIS unit and a new flip-out screen into a body that is only slightly larger than the A6600 and a mere 6g heavier.

If you've ever wanted a full-frame camera that's the same size as most APS-C models, the Sony Alpha 7C will not disappoint you - it really is a technological tour-de-force in this regard.

What's less cutting-edge is the A7C's somewhat slavish following of both the A6000-series design and the A7 III's specification. Sony really have spliced together these two facets to form the Alpha 7C, with few concessions made to improving either.

So you get the same handling experience that's been offered by A6000-series cameras ever since their inception many moons ago, and the same core specifications as the three-year-old A7 III, with just a sprinkling of minor improvements to help sweeten the deal.

If you like the handling of Sony's APS-C cameras then fine, but for us there are too many missing dials and buttons to make for a great user experience.

The Alpha 7C is a very customisable camera, but even that can't make up for the lack of a front control dial or an AEL button, no AF joystick, only one Custom button and only one memory card slot, the inexplicably limited touchscreen functionality, and the "old", over-complicated menu system rather than the much cleaner newer one that recently debuted on the A7S III.

The dated LCD screen is still exactly the same as on the A7 III and A6600 whilst the electronic viewfinder is even smaller and has a lower magnification, the hand grip is smaller than the more comfortable one on the A6600, the 4K video recording only goes up to 30p and only in 8-bit, and the new 28-60mm kit lens isn't at all well-suited to the vloggers that Sony are targeting the A7C at.

Sure, the A7 III has been on the market for a few years and has naturally declined in price, which partly explains the disparity between the two, but we still think that Sony is being over-ambitious with the A7C's price-tag and positioning.

Sony is attempting to reach out to a new, younger audience of vloggers and content creators with the launch of the A7C, many of whom are simply put-off by the sheer size and weight of current full-frame cameras.

The new Sony Alpha 7C certainly solves those key issues, but for us at least, it makes too many concessions to the A6000-series and A7 III models that it's clearly based upon to be a great camera in its own right, all at a price that puts it out of reach of a lot of its target audience. A technological marvel, then, but one that doesn't quite hit the mark...