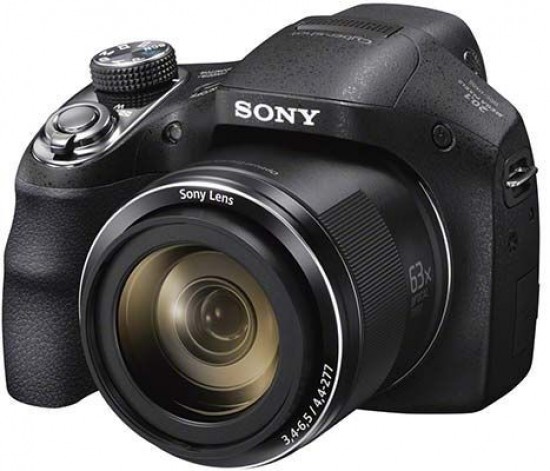 Sony's new Cyber-shot DSC-H400 is styled very much like an entry-level DSLR camera, complete with a viewfinder and mock-pentaprism housing on top. It's definitely a camera to be worn around the neck, slung over a shoulder - with a strap provided for both purposes - or tucked away in a suitable bag. The generous rubberized handgrip is large enough to squeeze three fingers comfortably around and usefully has indentations for your top two fingers, and when loaded with the supplied lithium-ion battery and an SD or Memory Stick Pro Duo card, it weighs 655g, which although on the heavy side for a modern bridge camera helps to provide a steadier hold when shooting towards the telephoto end of the zoom. To further help prevent blurred shots in such circumstances and in low light, Sony has also provided optical 'SteadyShot' image stabilization.

The build and finish is of good quality, with the all-black matt finish to the body and various DSLR-like dials and controls on initial inspection lending it an impression of being a 'serious' enthusiasts' model. The Sony Cyber-shot DSC-H400's relatively compact size also means that locating the right control is never a stretch for forefinger or thumb. Most of the features you want to access are literally at your fingertip, which of course makes for speedier overall operation. Overall dimensions are 129.6mm x 95.0mm x 122.3mm, not bad for a camera with a 63x zoom!

The front of the Sony Cyber-shot DSC-H400 is dominated by that huge Carl Zeiss Vario-Sonnar lens, here boasting a maximum aperture of f/3.4 and a focal range the equivalent of an ultra-wide angle 24.5mm to a super-telephoto 1550mm in 35mm film terms, providing more than enough reach for those paparazzi style candid portraits at full zoom, as well as landscapes and group portraits at the wider end. It does seem that zoom length has replaced the number of megapixels in the race to be the "best", at least for bridge cameras, although in our view trying to keep the camera steady enough to take a sharp picture at such long focal lengths is almost impossible when hand-holding the camera, and tricky even when mounting it ona tripod. We also get an AF assist/self time lamp porthole top left of the lens when viewing the camera front on.

The top plate of the camera extends the Sony Cyber-shot DSC-H400's sophisticated look and feel, with a chunky stereo microphone sitting just behind the otherwise hidden pop-up flash. To the right of this, when looking down at the camera as you grip it in both hands, is the narrow lozenge shaped on/off button, with an embedded lamp that glows green when the camera is switched on, or orange if the battery is low and the unit is being recharged. Incidentally we don't get a separate mains charger here. Instead there's a mains lead, adapter and plug, meaning that the lithium ion pack is charged in-camera. When your battery is down, so therefore is the camera, so it's a good idea to invest in at least one spare battery.

The Sony Cyber-shot DSC-H400 takes just over one second to power up, the lens extending a little beyond its protective housing to arrive at maximum 24.5mm wideangle setting while the image on the rear LCD pops into life. While a little slower than an actual DSLR, that's very respectable for this class of bridge camera.

The DSC-H400 is commendably swift to determine focus and exposure at the wider focal lengths, with the AF point/s highlighted in green on screen almost the instant your finger presses down on the shutter release button and finds the half-way point. It's a different story at full telephoto, however, where it takes at least a few seconds for the camera to lock focus, so don't expect to be able to track fast-moving animals or the like. Press down fully to take the shot and a full resolution 20 megapixel JPEG is committed to removable media card in just over three seconds.

Keep a forefinger on the zoom lever that encircles the shutter release button and the Sony Cyber-shot DSC-H400 powers through its 63x optical zoom range from wide angle to telephoto in about eight seconds. Continue holding down the lever and it will continue zooming digitally to a 126x equivalent setting (if Digital Zoom is enabled and set to Precision in the menu). If this option is taken the camera deploys the fantastically named Pixel Super Resolution technology that automatically enhances imagery to avoid the usual blocky appearance of conventional digital zooms.

Next to the power button is a raised, ridged-edged shooting mode button with an action that is isn't quite stiff enough to prevent the user accidentally slipping from one setting to the next in the thick of it. There are 8 options on this dial. We get the creative options of program, aperture-priority, shutter-priority and manual mode settings, plus Sony's now ubiquitous Sweep Panorama function, whereby the user pans through an arc as directed by the on-screen arrows - the resulting elongated shot automatically stitched together in camera. It's both very effective and very easy to use.

Also on the dial is a dedicated High Definition video mode for up to 720p 1280x720 pixel clips at 30fps (Fine or Standard quality), but no 1080p/i mode. There's a dedicated video record button on the rear of the Sony Cyber-shot DSC-H400, or you can choose the Video mode on the shooting mode dial and then press the shutter button to begin recording. A press of menu when in video mode summons up a variety of options for adjusting the video resolution and frame rate, and also switch from intelligent auto video recording to applying picture effects, as we more usually can with stills photography. There's also the ability to set exposure compensation and white balance. Another bonus is that full use of the optical zoom is provided in movie mode, as is automatic focus adjustment if you alter framing or swap subjects mid-sequence.

Scene modes are up next and there are 11 user selectable options on the Sony Cyber-shot DSC-H400, covering everything from the usual portraits to shooting landscapes by night and even handheld; pet, beach, snow and fireworks mode round out the more usual suspects. Rounding off the shooting mode options is the scene and subject recognizing and thereby automatically adjusting Intelligent Auto mode.

With the shutter release button and the zoom lever that encircles it comfortably sloping forward at the top of the handgrip, the last control on the Sony Cyber-shot DSC-H400's minimalist top plate is the Finder/Monitor button for switching between the EVF and the rear LCD screen. The EVF is unfortunately tiny and of low-resolution - it's so poor that we only used it at the very long focal lengths as a neccessary means of trying to steady the camera, or in very bright sunlight when we struggled to see the rear LCD screen. There is also a very stiff and imprecise dioptre control for glasses wearers.

The rear of the Sony Cyber-shot DSC-H400 is dominated by the 3-inch, 460k dot resolution LCD screen. In terms of controls the back of the camera looks slightly sparse mainly due to the small dimensions of the actual buttons, though in fact most of the essentials are here. A dedicated movie record button sits to the top- right of the LCD screen, alongside the textured and generously-sized thumb-grip.

Beneath is the Menu button, a press of which summons a toolbar. This appears ranged to the left hand side of the screen. It's here that we have access to most of the camera's shooting and setup options - surprisingly missing a function reset button but otherwise offering all the regulars - and the in-camera help guide for beginners.

A familiar four-way control pad at the bottom right of the Sony Cyber-shot DSC-H400's backplate features options for controlling the rear display, flash settings (with red eye reduction turned on or off via the menu screens), exposure compensation, and the self timer (two or 10 seconds). Completing the rear of the DSC-H400 are the self-explanatory Playback and Delete buttons.

On either flank of the camera is a metal lug for attaching the provided shoulder strap, while on the left hand flank there is a flip-open door protecting the camera's AV Out / USB port. Incidentally battery life of the lithium-ion cell inserted in the base of the handgrip is around 300 shots. Finally a metal screw thread is located dead centre of the camera's base plate.