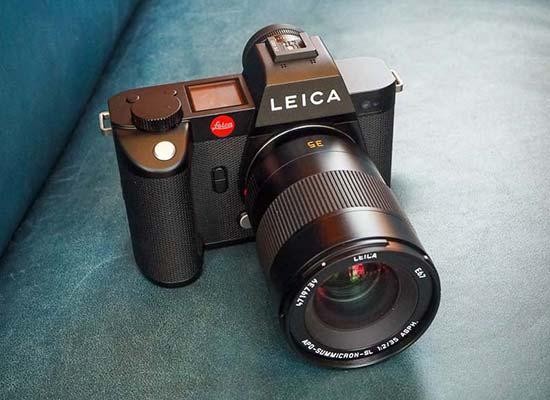 Find out what we thought of Leica's brand new full-frame sensor camera by reading our detailed first impressions...

The Leica SL2 updates the original Leica SL camera launched in 2015. So what’s changed? According to the manufacturer, the ergonomics have been improved via a more comfortable grip plus a simplified three-button control layout. The construction is identifiably all-metal, with an robust leather wrap.

“This isn’t just an SL2, but a completely new camera,” Leica UK MD Jason Heward told us at the London product launch, adding that the company wanted to improve the ergonomics whilst still maintaining the qualities that make it a Leica. Feeling solid and tank-like when gripped in the palm – part justifying the asking price – the camera has a three-part body construction, comprising a top plate, a bottom plate and a central body portion.

Top and bottom plates on the SL2 are comprised of solid pieces of machined aluminium – as you may be able to see from our hands-on shots – which has been anodized to provide a smooth surface. The main body is magnesium alloy, helping make it marginally lighter than its predecessor, claims its maker.

‘Elastomer’ material is said to have “revolutionised” the SL2’s handgrip, according to the brand, while the back of the camera has also seen some changes, with what were formerly thin unmarked buttons surrounding the original SL’s screen now clearly labeled and more ‘button like’. We were told that this was all part of the intention to ensure than anyone who comes to the SL2 after using Leica’s recently released Q2 won’t find it too much of a shock.

Much changed in comparison with the original SLR, meanwhile, is the SL2’s Graphical User Interface – which again is more intuitive and clearly labeled, key settings accessed via a prod of virtual on-screen buttons, rather than having to scroll through pages of menus line-by-line.

Though we felt we had to press a little harder than we would do on our mobile phone to get a response out of the unit we had a brief play with – which, to give it a positive spin, helps prevent accidental activation of settings should the camera connect with your shirt button, for example – Leica tells us the touch screen on the SL2 has been updated to “be as responsive as an iPhone.”

According to Leica Akademie tutor Robin Sinha, also present at the product launch, the manufacturer has made it a policy to offer up a clear delineation between stills and video settings on this camera, with menus for the two formats being distinct and completely separated.

The camera can offer 4K video capture at up to an impressive 60fps speed. For videographers, it further boasts the advantage of headphone and microphone jacks, plus another new addition is the provision of USB-C, allowing for the camera’s sizeable battery to be recharged within the camera, if the user desires.

Likewise according to Leica, built in image stabilisation ‘unlocks the potential’ of using the camera with classic M series lenses as well as, of course, a growing selection of SL lenses. Leica makes the case that the 47-megapixel CMOS sensor-incorporating SL2 is the only mirrorless camera to be designed and crafted in Germany – should that sway any potential purchasers.

Outwardly the camera’s body has had some upgrades in terms of weather proofing, with Leica telling us that its SL2 can “withstand water spray from any direction.” The camera has been IP54 rated for robustness and can be used either down to minus 10°C or up to 40°C, which in truth is fairly standard for a premium model.

And all of the above without the SL2’s dimensions having got any bigger; indeed we placed the ‘old’ and new SL cameras side by side and from both the front and the top it is hard to tell between them, despite the very slight tweaks that have been made to the ergonomics of the SL2’s handgrip.

Provided at the camera’s side are two SD card slots, with the claim being that both slots are now capable of writing at the same speed. In terms of low light performance, the SL2 offers up a native light sensitivity range the equivalent of ISO50-50,000, while we were told it boasts 14 stops of dynamic range too.

In addition to all of the above, the robust SL2 is the first Leica camera featuring a Maestro III series processor to cope with all the data crunching, with Leica adding that a firmware upgrade will follow next year that also introduces a multi-shot mode. This mode will allow for up to 8 DNG (Leica ‘Raw’) files to be combined to produce a whopping 187MP image file.

The company believes that the camera’s ‘sustainability’ will be guaranteed by constant firmware upgrades. “Compared with the original SL this is a very different camera indeed,” Leica’s Robin Sinha concluded, echoing MD Jason Heward’s opening comments to us.

Further features that jumped out to us on initial inspection and inquiry include the fact that the SL2 now not only offers face detection but also body detection – so that if the subject turns away from the lens, for example, the SL2’s AF will continue tracking said subject.

Leica has also placed Object Detection Auto Focus aboard the camera, which allows the user to select between the different types of subject movement they may be photographing.

In terms of lens support, on launch there are five prime lenses and three zoom lenses directly compatible with the SL2 camera – the latter trio comprising a useful 24-90mm, 90-280mm and a 16-35mm lens.

Leica teased that new 21mm, 24mm and 28mm lenses will follow on next year, along with “big upgrades” in terms of its ‘gallery in your hand’ Leica Fotos app. The latter will newly offer more ‘pro’ support for the likes of Lightroom and video.

The result is that a subscription is being introduced for professional photographers, who are being asked for a relatively modest contribution of $49.99 per year. Leica did add to us that Adobe hasn’t yet made a profile for the SL2, but this should follow on shortly from the software giant.

As gorgeous as it is, with availability from November 21st, potential owners will need deep pockets within which to find the £5,300 asking price for the Leica SL2. The company did however make the point that this is actually cheaper than the price the original camera launched at back in 2015.