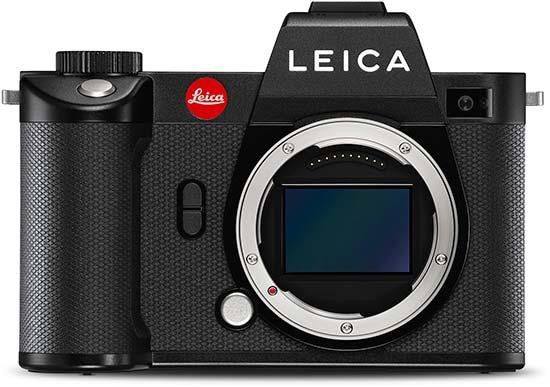 The Leica SL2 is a new professional full-frame mirrorless camera aimed at both photographers and videographers.

It features a 47 megapixel full-frame (24x36mm) CMOS sensor with no optical low pass filter, the latest Leica Maestro III series processor, 4K/60p video recording, a class-leading electronic viewfinder with a resolution of 5.76 megapixels, and a 3.2-inch LCD screen with 2.1 megapixels and touchscreen control.

When we reviewed Leica’s Q2 earlier this year, we wondered if it was perhaps the most over qualified and over specified street photography camera ever.

Now arrives the Leica SL2, another solid, black-bodied camera, but differing this time in being equipped with Leica’s L-mount, thus enabling around 150 lenses to be utilised if investing in specific adapters.

Interestingly, Leica claims that the refined and more intuitive user interface on the mirrorless full frame SL2, when compared with its direct predecessor, should enable any users familiar with the Q2 to immediately get to grips with it.

Though the SL2 is directly based on the original SL camera from back in 2015, the SL2 and the Q2 do have some equally obvious similarities – not least a 47 megapixel resolution from a full frame sensor that, when coupled with some high quality Leica ‘glass’ – we had a 24-90mm lens in use, suitable for delivering some lovely de-focused background effects – produces images that are almost too sharp.

It’s worth noting that unless you (or your subjects) are blessed with perfect skin, the Leica SL2 can be quite unflattering, in picking up and magnifying every minor blemish or wrinkle.

The level of detail, then, is astounding – and, viewed large on-screen, almost overwhelming. You’re not just reviewing the pictures from the Leica SL2 – the detail draws you in, so that you almost ‘inhabit’ them.

It has to be said that, while Leica may have tried to update this camera while keeping the weight down, it’s not the most portable option ever. In fact, used in tandem with the aforementioned zoom, the SL2 feels like it weighs a ton – it’s been fashioned from two solid pieces of aluminium with a central magnesium alloy portion sandwiched in its midst – so we were thankful for the padded strap that also came with our sample.

While the rock-solid build quality may reassure someone prepared to spend more buying a body-only Leica SL2 than a vintage Moog Model D synthesizer, it’s probably not the ideal travel camera for lugging around for an entire day on a city break – even if you were to return with some cracking photos as a result.

However, if you’re someone who is going to be embarking on a more considered approach to shooting and who isn’t rushing around like a wild thing, then the SL2 may be a better fit.

Landscape photographers, who will be able to take some of the weight off (officially 835g without battery – considerably more with lens and battery) by placing it on a tripod, or portrait photographers, shooting for fixed time sessions, may therefore get the most out of it.

That’s if, to play devil’s advocate for a moment, at this price they’re not otherwise tempted by a mirrorless medium format camera like the Hasselblad X1D II 50C released earlier this year (a suggested £4,500 in the UK, whereas the Leica SL2 is a wallet destroying £5,300).

Given the heft of this camera, it’s perhaps not surprising that Leica has been pushing the fact that, this time around, we get a slightly/subtly remodeled and, the suggestion is, more comfortable handgrip thanks to it being coated in ‘elastomer’ material.

While it isn’t moulded to our fingers like the grip on a DSLR might be, thereby making it easier to balance out the weight if we’ve a big lens on the front, on the SL2 it’s certainly big enough to wrap our full four fingers around, while the thumb automatically brushes up against the control dial – or as Leica refers to it, ‘click wheel’ – peeking out at the back. It’s not as comfortable as operating a DSLR with a comparable lens might be, however.

Nevertheless, its manufacturer is suggesting improved ergonomics on the SL2, and, as part of this, we get a simplified three button layout to the left of the LCD on backplate – preferable to the thin unmarked strips that stood for controls on the even more minimalist original SL.

At least here, then, we’re not always prodding around in the dark trying to find the functionality we crave, though a dedicated delete button and a ‘back’ button to jump back to prior settings on occasion may have improved the overall user-friendliness. All this being said, the SL2 does provide the accessibility of a touch screen – so, when in doubt, a tap of the LCD is another operational option.

While the Q2 was dust and water resistant, we’re told the SL2 is similarly robust, to the extent that it can apparently withstand water spray from every direction. So while it’s OK to use in the drizzle, we probably wouldn’t risk dunking it in the pond.

Though we main query the heft, the robustness of build is so reassuringly solid that, providing the internal electronics hold up, the SL2 could surely last years of use – which we’d certainly want it to at this price.

The fact that the SL2 features a large postage stamp sized top plate status display window – just like on a pro level DSLR – is a real plus in operation. It’s really helpful in not being distracted by having to otherwise refer back to the larger screen at the rear of the camera, and thus take your eye off your subject for even longer.

The rest of the Leica SL2’s top plate is fairly conventional – with a familiarly raised viewfinder-housing mid section also finding space for a vacant hot shoe, as well as integral stereo microphones positioned just in front.

We addtionally get a bottle top style control wheel and a springy shutter release button located on the forward slope of its handgrip, where it automatically falls under the forefinger.

Located just behind the mode wheel are two unmarked function buttons – presumably giving them markings would have interrupted the minimalist appearance of the top plate. The left one here was set to call up on-screen information, such as a live histogram and sound bar indicators, on our review sample, while the right button was set to call up ISO options.

Here we get the choice of fully auto ISO (pretty accurate too), and then a very capable light sensitivity range stretching from ISO50 up to ISO50000.

The only writing here is the camera model name etched into the rim of the hotshoe – while of course we get the familiar red logo at the front, plus an additional can’t-miss-it bold ‘Leica’ etched in capitals above the lens mount.

The back of the camera, while featuring three marked buttons for ‘Play’, ‘Menu’ and ‘Fn’ (function) is otherwise clean looking. Rather than placing it on the top plate, as with most cameras, here the main on/off button is located out of harm’s way at the top left of the backplate, where, presumably, there is less chance of it being accidentally activated by a stray finger or thumb. While your right hand encircles the handgrip on this camera, your left naturally moves forward to support the lens.

The Leica SL2’s large and clear 3.2-inch back-lit LCD screen sits slightly off centre to the left, with a bezel design that causes it to stand slightly proud of the camera’s surface and suggest, to the untrained eye, that it might tilt or be adjustable in some way.

But no, the LCD here is resolutely fixed and conventional in that sense. While this monitor can be used for composing and of course reviewing images, we more naturally found ourselves using the electronic viewfinder ranged directly above it.

Usefully, Leica has also provided a thumb wheel top right of the camera back, with a slightly roughened surface to the front and the right side rear of the camera preventing slippage – although the sheer heft of the camera also helps prevent any wobble in the hand (incidentally there is five axis body integral image stabilisation built in here, equivalent to 5.5 stops).

There are a further two unmarked function buttons on the camera back. One is a function button for switching our viewing between 2.1 million dot resolution LCD and whopping 5.76 million dot EVF, while the other is more of a toggle lever or mini joystick, which can be used for navigating and selecting on-screen menu settings, or jumping from one captured image to the next.

A quicker way to do this, however, is simply to swipe through shots with a finger, like we’d do on a mobile phone or smart device. Indeed, Leica has said this time around it has attempted to make the SL2’s screen as responsive as that of an iPhone.

Switch the camera on and you’ll find the Leica SL2 is as responsive as any DSLR, with either the rear screen or the eye level viewfinder quikcly bursting into life, dependent on how you’ve got the camera set up. We were shooting JPEG in tandem with Leica’s Raw equivalent DNG files.

Half squeeze the shutter release button and the AF point immediately illuminates in green to signify the nearest subject is in focus. Obviously there is the opportunity to change this mode and shoot manually with this camera, but to be honest we found the Leica’s AF so reliable – even when confronted with fairly busy scenes and subject matter – that there’s barely the need.

The right of the camera, if viewing it from the back is where we find a compartment housing not one but two SD card slots, which is again another way of the SL2 showing its professional mettle.

With the camera shooting such whopping file sizes for both stills and video – a 30 second video clip at 4K at 60fps, or in cropped 5K mode, is around 640MB for example – you’ll want to not only load a high capacity card, but also one with a fast read/write speed so it can keep up. We were using aClass 10 300MB/s SanDisk Extreme Pro card, just out of interest, which avoided any camera freezes or operational error messages.

In operation, we also liked the fact that the electronic viewfinder, here with diopter adjustment markings, juts out sufficiently proud of the body with a rubber cushioned eye relief to avoid our nose scrunching up against the rear LCD screen. With the camera held to our right eye it just misses it, though doesn't quite clear the left hand edge of the camera.

Operationally, the Leica SL2’s onscreen menus are clearly laid out across either 5 or six screens depending on whether you have the camera in video (5 screens) or stills (6) shooting modes. With an initial press of the menu button we are provided with a full screen’s worth of essential settings at a glance, with a visible tab sitting behind, displaying either Photo or Video. A simple on-screen finger taps alternates between them.

HDMI output and a USB port are well hidden under moulded rubber flaps at the left hand side on the SL2 camera itself. There are further ports for plugging in an external microphone and also a port for a headset to monitor sound with, although the internal microphones should be sufficient for most non-professional usage.

Battery life via the chunky lithium ion rechargeable pack secreted away at the camera base is good for 370 shots, according to CIPA standard, which, while much less than a professional DSLR you could otherwise buy for this outlay, is fairly average for a mirrorless camera. Re-charging time from spent to fully charged is quoted as 140 minutes.

So that’s how this once again robust, tank-like and precision-engineered Leica SL2 handles – what about the images it delivers? Do they justify the attendant premium price tag? Read on to find out...