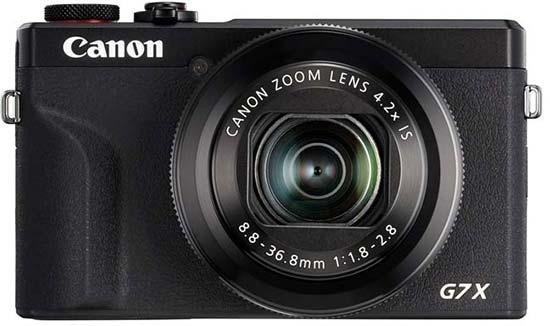 Canon have pulled out all the stops to make this camera more appealing to vloggers, including 4K movie recording with no crop, 120fps Full HD movies, in-camera digital image stabilisation, a live streaming function, 9:16 vertical movie support, clean HDMI output and the addition of a 3.5mm microphone input.

Outwardly the new Canon PowerShot G7 X Mark III looks very similar to its predecessor, with most of the differences between the two models being under the hood.

Measuring 105 x 60.9 x 41.4mm and weighing 304g, the Canon PowerShot G7 X Mark III is similar in size but ever so slightly lighter than the G7 X II camera that it succeeds in Canon's line-up of premium compact cameras.

It has an all-metal body that feels solid in use, with all of the various external controls offer just the right amount of stiffness and resistance. The Canon PowerShot G7 X Mark III will just about fit into a trouser or shirt pocket, but is more at home in a deep coat pocket or small camera bag.

The Canon PowerShot G7 X Mark III features a 20.1 megapixel CMOS sensor that captures images either in the 3:2, 4:3, 16:9 or 1:1 aspect ratios whilst maintaining the same angle of view, even when shooting RAW images.

The G7 X Mark III retains its predecessor's very handy exposure compensation dial on top, although setting the ISO speed is still a rather convoluted affair. The G7 X Mark III doesn't have an optical viewfinder, though, and there's no way to add an electronic one either, instead relying on the rear LCD screen for image composition. You'll need to look at the equally new G5 X III camera if you want a viewfinder.

The Canon PowerShot G7 X Mark III's unassuming-looking front plate is dominated by the 4.2x zoom lens, with a small bulb for the built-in self-timer/AF assist lamp flanking it on the top-left. Note that there's no thread included for fitting filters to the lens.

The G7 X Mark III doesn't have a front control dial, as featured on its EOS DSLR and mirrorless cameras and some high-end compacts, which makes changing the aperture and shutter speed a little more difficult.

Instead you use a combination of the lens control ring and the rear navigation wheel to change the aperture and shutter speed, each of which can be configured to suit your particular way of working. The lens ring can be assigned to one of nine different settings, accessed via the Ring Function menu option.

We still found the rear navigation wheel on the rear a bit too thin to use precisely and quickly, and disappointingly you can no longer set the lens ring to a clicking or smooth action via the small lever switch set at 4 o'clock, as Canon have removed it entirely.

There's a small but useful handgrip on the front of the Canon PowerShot G7 X Mark III, which makes it easier to steady the camera in conjunction with the textured small pad at the back where your right thumb naturally rests.

Looking down on top of the camera from left to right, the G7 X Mark III's top-plate houses the folding pop-up flash, with a switch on the side for manually releasing it, a springy raised nipple-style shutter release button surrounded by a rocker switch for operating the optically stabilised 4.2x zoom (24-100mm equivalent on a 35mm camera), and behind this again the small, recessed on/off button.

The fact that the lens is image stabilised, says Canon, provides a four-stop advantage when shooting handheld, while the Dual Sensing IS system analyses the focal length, focal distance and type of camera movement and applies the most appropriate mode from seven possible settings, and the Hybrid IS system makes shooting macros easier than before by counteracting both shift and angular movements.

The Canon PowerShot G7 X Mark III is quick to power up in less than a second, the rear LCD blinking into life with the optical zoom lens simultaneously extending from storage within the body to its maximum wide-angle setting. It starts at the equivalent of 24mm, making it very useful for those landscapes group portraits or getting the required shot in confined spaces.

The G7 X Mark III's lens has bright apertures of f/1.8 at the wide-angle end of the zoom range and f/2.8 at full telephoto, plus a 9-blade aperture for better bokeh effects. As a further aid to landscape fans, a 3-stop neutral density filter option is provided among the function menu options, to be turned on or off as required or to Auto if you want the camera to take control, and a horizontal Electronic Level and RGB histogram can be enabled to help with composition and exposure.

The G7 X Mark III has an even better continuous shooting mode than its predecessor thanks to the new stacked image sensor and the latest Digic processor, which in conjunction with Tracking AF makes this camera surprisingly well-suited to both slow and fast moving subjects.

The Canon PowerShot G7 X Mark III can capture both JPEG and Raw images up to a whopping 20fps with the focus point locked at the first frame, or you can shoot continuously at 8.3fps with AF/AE tracking. There's also a special 30fps RAW Burst mode with an optional 0.5sec pre-burst setting to help make capturing that decisive moment even easier.

The shooting mode dial features settings for Hybrid Auto, Auto, Program, Shutter Priority, Aperture Priority and Manual, along with a user customisable setting, a smattering of scene modes (8 in all), various Creative Effects and finally a video mode.

The Canon PowerShot is now capable of 4K movie recording with no crop, so you capture the same angle of view in 4K and 1080p modes, something that Canon has consistently struggled to deliver on its recent camera releases. The 4K video quality is shot at 3840x21600 pixels at 30/25fps, and there's also 1080p recording available at 1920x1080 pixels at 60/50/30/25fps, depending on the region setting.

In addition, the G7 X III can now record 120fps Full HD movies via the High Frame Rate Movie menu option for slow-motion footage idel for B-roll, although the camera can't autofocus, stabilise the footage or record sound during recording.

The in-camera digital Dynamic Image Stabilisation system offers three settings - low, standard and high - to compensate for shake during movie recording, which helps a lot when hand-holding the camera, say, for vlogging.

Other new video features include a live streaming function that supports YouTube (although you need to connect the camera to a Wi-Fi network or smartphone to enable this feature), 9:16 vertical movie support for Instagram, a clean HDMI output and the very welcome addition of a 3.5mm microphone input on the left-hand side of the camera, all of which make this one of the best-appointed cameras in Canon's massive range for vloggers.

We appreciated the flexibility afforded by the G7 X III's tilting LCD screen in terms of trying out unusual and awkward framing. It can be tilted up through 180° for easier selfies and vlogging, and it can also be tilted down by 45° for use as a more discrete waist-level finder. The LCD is exactly the same as on the G7 X II, a 3 inch monitor with 3:2 aspect ratio and a resolution of 1040K dots.

The Canon PowerShot G7 X Mark III has a touch focus/shoot option which is on by default. To switch it off, you change the Touch Shutter option in the main menu. This then becomes a touch focus screen which will lock onto the subject wherever you touch, with a press of the Display button centering the AF point again.

In playback the touchscreen can be used to change the magnification of an image by spreading and pinching two fingers, and switch between images by swiping from side to side, just like on a smartphone. You can also adjust the LCD's touch sensitivity to your liking with Standard and High settings available.

On the right flank of the G7 X Mark III is a dedicated button for quickly connecting to a previously paired smartphone or tablet, print from a wi-fi printer, upload to a web service, and connect to a wireless remote.

Initial set-up of the Wi-fi options can be a faff, requiring you to manually connect to the camera’s wireless hotspot, especially as the camera no longer supports NFC pairing. The new Bluetooth feature is a lot easier to setup. However you connect though, the free Canon Camera Connect app lets you wirelessly transfer images to a smartphone, tablet or computer, as well as print to a PictBridge-compatible printer. The app also allows you to remotely control the camera with your phone and add GPS data to your images (when connected via Bluetooth).

Returning to the rear of the camera, alongside the new and very handy AE-Lock button is the one-touch movie record button, which as its name suggests instantly begins recording a movie at the current quality and creative settings.

Underneath this pair of controls is the four-way selection or control pad, with, at points north, east, south and west a means of selecting the burst shooting mode and deleting images in playback, choosing from the on-board flash settings, setting the Display mode, and activating manual, normal or 5cm macro focus modes.

The G7 X Mark III has retained the 31-point AF system of its predecessor, which focuses quickly for a compact camera in either good light or bad and at both ends of the zoom range, with a very slight delay of around 0.1 second. New to this model is a very useful AF+MF feature which allow the focus to be manually adjusted even after the autofocus has been set.

In the middle of the scroll wheel is the Q/Set button that is again consistent with other Canon G-series models. Press this button when in any of the capture modes and left/right toolbars that will be familiar to Canon users appear on the screen, offering a toolbar at the bottom with further options when you come to rest on a particular setting.

At the bottom right hand corner of the backplate are a further pairing of buttons for playing back your images and accessing the main menu. A press of the Menu button now brings up an EOS-like menu system that matches the ones found on the company's DSLR and mirrorless cameras, making the G7X III easier to navigate for those power users, and still friendly enough for the less experienced.

On the right hand flank of the camera - viewed from the back - we find covered ports for HDMI out and a new USB 3.0 connection. You can charge the Canon PowerShot G7 X Mark III via the USB port and also power it out in the field using a power bank, outlet, or computer whilst shooting.

On the bottom is a familiar metal screw thread for a tripod and a sliding cover for the compartment that houses the lithium-ion battery needed for power and the SD, SDHC or SDXC cards required for image storage. Battery life is exactly the same as the G7 X II at around 265 shots from a full charge, which is impressive given the extra demands that the faster sensor and processor are placing on it.