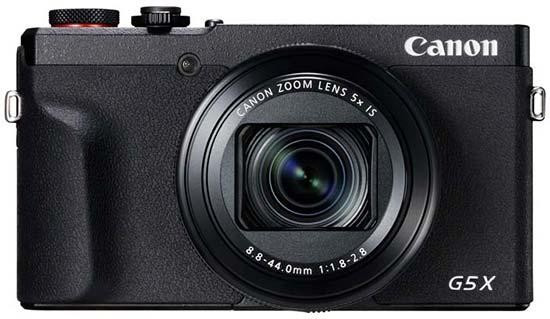 Announced at the same time as the G7 X Mark III, The Canon G5 X II model marks quite a departure from its predecessor.

The Canon Powershot G5 X II comes almost four years after the original G5 X, and features a pretty different kind of design - making it actually very similar to its G7 X Mark III sibling. The biggest differences being that the G5 X Mark II is equipped with a viewfinder, while the G7 X Mark III is not, with the G5 X Mark II also having a slightly longer zoom lens.

Other interesting features include a pop-up electronic viewfinder and a tilting touch-sensitive LCD screen. There’s also inbuilt Wi-Fi and Bluetooth, USB-C battery charging, uncropped 4K video recording and burst shooting at up to 30fps - a new Digic 8 processor helps to facilitate some of those more advanced features.

Somewhat unusually for a “Mark II” version of a camera, the Canon G5 X Mark II is quite a departure from its predecessor. The biggest difference is that the viewfinder is no longer found centrally mounted on the camera’s top-plate, but instead is found to the left, retracted into the body - in fact the camera is very close in size and design to the Sony RX100 range, which also features a pop-up, 0.39-inch, 2.39-million dot viewfinder.

Canon clearly had the aim of making the Canon Powershot G5 X Mark II much more svelte and therefore better able to fit in a pocket. Changing the viewfinder style - as well as removing the fully articulating screen - sees it have much more diminutive dimensions that make it more appealing as a carry around or day trip type of camera.

On the front of the Canon G5 X II is - considering the size of the camera - a reasonably chunky finger grip which makes it feel pretty secure in the hand. Indeed, it feels much nicer than the smooth, flat bodies of the Sony RX100 series which have always felt just a little bit too slippery and perilous.

In order to use the viewfinder, first of all you’ll need to push down a switch on the side of the camera, and then pull the eyepiece out from the popped up finder. This is something that older RX100 models used to feature, but have since been changed to a fully ready to go version on the Mark VI and VII models.

Here on the Canon G5 X Mark II it’s a slightly frustrating two-step process that could potentially lead to missed shots on occasion, but there’s nothing to stop you from leaving the finder in its popped out state when in the midst of a shooting session. The viewfinder is on the small side, naturally, but it’s still quite pleasant to use if you prefer composing your images in this way.

Announced at the same time as the G7 X Mark III, it’s fair to say that the G5 X Mark II’s target audience is those who are more concerned with photography than video (while the reverse is true for the G7 X Mark III). Although the G5 X Mark II can shoot uncropped 4K, crucially it is missing a microphone input, so it’s more for casual video recorders than anybody with a serious penchant for the moving image.

On the rear of the Canon G5 X Mark II is a tilting touch-sensitive 1040k-dot LCD screen. It tilts downwards, as well as all the way forwards for framing selfies and videos. You can use the screen to change the focus point as well as making selections in both the quick menus and the main menus. It’s best used in conjunction with the various physical buttons which are found on the body of the G5 X Mark II, which we’ll come to shortly.

Just like the G7 X Mark III, the Canon G5 X Mark II has a ring around the lens which you can use to adjust various parameters, depending on both the shooting mode and what you assign to it in the main menu. In its default setup, you can use it to adjust aperture, which is a nice touch for traditional photographers. If you prefer though, you can also set it to adjust exposure compensation, ISO, white balance, zoom and more.

By default, the 5x optical zoom is controlled by a rocker switch around the on/off button on the top of the camera. The zoom is quite smooth and fluid, reaching the furthest focal length not too quickly and not too slowly. If you are shooting in JPEG only, you’ll also be able to activate two kinds of digital zoom, but as these are essentially just a crop, it’s probably best to avoid them unless absolutely necessary.

Also on top of the Canon Powershot G5 X Mark II is a mode dial which contains all the various exposure modes the G5 X Mark II offers. There’s a full complement of manual and semi-automatic modes (like aperture priority, shutter priority, manual and so on), as well as fully automatic, scene modes, digital filter modes and a fun mode which captures a short video clip with every shot taken, compiling an overview video of the day’s events.

Just underneath the mode dial is a dedicated dial for adjusting exposure compensation - but you can only use this dial in the semi-automatic or manual modes. It’s a shame it can’t be customised to control a different parameter in different modes, but it’s easy enough to ignore the dial if you don’t need it as it’s recessed into the body of the camera.

Where the viewfinder was found on the older G5 X, there’s now an inbuilt flash, which can be popped up by pressing a button on the top of the camera. When you’re done with it, simply push the flash back into place.

Flipping to the back of the Canon G5 X Mark II, all the buttons here can be found on the right hand side, making it easy to make all the necessary adjustments with just your right hand. If you’ve ever used a Canon compact camera before, this should be a pretty familiar layout as not a great deal has changed over the years.

There’s an AE lock button, video record button, a scrolling dial which doubles up as a four way navigational pad, a playback button and a main menu button. A quick menu can be accessed by pressing the central button in the navipad. A couple of the buttons can be customised to control different functions by default, while the scrolling dial can be switched off entirely if you prefer.

Each of the directional keys controls a specific function. Press the left key to choose between different focusing modes (macro, normal and manual), press the up key to access the different drive modes (single, high speed continuous, low speed continuous, self-timer), press the right key to access flash modes, while the down key controls the display - for example you can switch on a digital level and a histogram, which can come in very handy.

In the quick menu you’ll find an array of settings which you might like to change relatively frequently. Here are options such as ISO, switching on raw format shooting, enabling the inbuilt ND filter and so on.

In terms of focusing, the Canon G5 X Mark II is pretty good, but it’s safe to say that it can be beaten by the more advanced Sony RX100 VI and VII models (though it’s worth noting that the Sonys are significantly more expensive).

While the Sony cameras offer such useful functions as Eye AF, and very impressive subject tracking, the G5 X Mark II is a little more staid. Using the G5 X Mark II with static - or reasonably static - subjects you are unlikely to have much cause for complaint, but since it doesn’t use Canon’s Dual Pixel AF and relies solely on contrast detection, you might find there are occasions when it doesn’t quite lock on to the subject as quickly as you might like.

Battery life is a little on the limited side with the Canon G5 X Mark II. Battery life is officially rated at 180 shots when using the EVF, or 230 shots if you stick with just the screen. On the plus side, USB charging is now available so you might like to carry a power bank with you if on your travels without access to a wall socket.