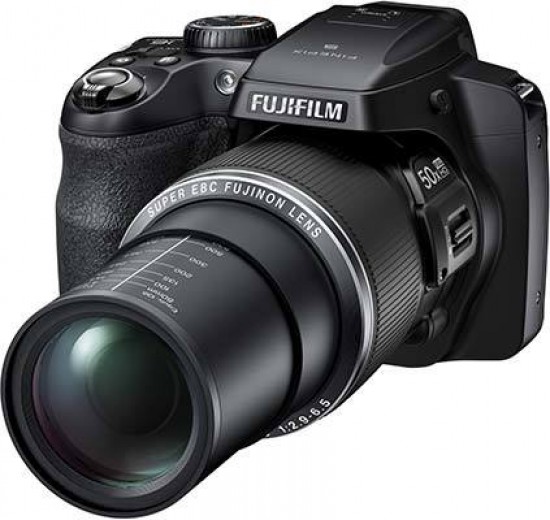 The Fujifilm FinePix S9200 is a new ultra-zoom bridge camera. Looking and handling very much like a DSLR, the Fujifilm S9200 boasts a 50x zoom lens which covers a 35mm equivalent focal range of 24-1200mm and features 3-stop lens-shift image stabilisation. Other highlights of the Fujifilm S9200 include a 1/2.3-inch 16.4 megapixel backlit CMOS sensor, a 3-inch 460k-dot LCD monitor, 201k-dot electronic viewfinder, and full 1080p HD movie recording at up to 60fps with stereo sound and 5-Axial image stabilisation. In addition there's an ISO range of 100-12,800, continuous shooting at 10fps, High Speed movie capture at 480fps, a customisable Function button, and full manual controls. The Fujifilm FinePix S9200 is available now for £269.99 / $349.99 in the UK / US respectively.

The Fujifilm FinePix S9200 is identical to the slightly more expensive S9400W model, which additionally offers built-in wi-fi connectivity. The S9200 looks and handles very much like a DSLR camera, measuring 122.6 (W) x 86.9 (H) x 116.2(D) mm and weighing 670g with the battery and memory card fitted. Designed as a do-it-all camera for both beginners and more experienced users, the Fujifilm FinePix S9200 is more than weighty and well built enough to withstand a few knocks. The moulded curves of the body and shiny black finish deliver a purposeful look that is as aesthetically pleasing as it is practical, with nice chunky controls, an ergonomic control layout that allows both quick and easy access to functions, and a very deep hand-grip with a well-thought-out indentation into which a fore-finger slots comfortably.

At the heart of the S9200 is a non-interchangeable 50x zoom lens. This incredibly versatile lens offers a focal range starting at an ultra-wide 24mm and finishing at an ultra-telephoto 1200mm, which, as Fujifilm cannily point out, would take at least two super-zoom DSLR lenses to offer similar reach. Throw in the 1cm Super Macro Mode and impressive maximum apertures of a bright f/2.9 at 24mm wide-angle to a slightly slower f/6.5 at 1200mm telephoto, and it's clear that the S9200 is perfectly suited for any subject that you can think of, near or far.

To help avoid blur resulting from camera shake when shooting in low light or hand-holding the camera at the telephoto extremity of the zoom, Fujifilm have added a 'belt and braces' solution of high ISO sensitivity, stretching up to ISO 12,800 at full resolution, a built-in mechanical stabilizer with Continuous or Shooting Only modes, and digital image stabilisation too if required. Activated via the IS Mode menu option, you can set the system to Continuous, Shooting Only, either mode with the addition of digital stabilisation, or Off. Note that the camera will only automatically adjust the ISO speed when using the Auto shooting mode - in the other modes the ISO speed that you select will always be used, so only the mechanical sensor-shift part of the system is used.

From the front of the Fujifilm S9200 the large optically stabilised zoom lens dominates proceedings, with a push-on lens cap and retaining strap provided in the box. Above the lens and extending out across the lens barrel, which boasts a textured surround allowing you to get a good firm grip, is a sloping ridge that conceals the pop-up flash (when not in use), which is activated via a dedicated button positioned on the right. Still viewing the S9200 from the front, the stereo sound speakers are positioned just behind the pop-up flash. There's a familiar dual purpose AF-assist illuminator and self-timer lamp to the left of the lens, and located on the right is a clever control that make zooming with the massive 50x lens more intuitive. The S9200 has a a side lever that allows you to smoothly operate the zoom with your left hand, leaving your right hand free to operate the shutter button. You can also assign one of two levels of zoom speed to this lever, with the fastest zooming in/out in just two seconds.

Looking down on top of the Fujifilm FinePix S9200 when viewed from the rear, there's a clearly labeled and logically laid out control set. Slide the On/Off switch to turn the Fujifilm FinePix on, and the rear LCD or electronic viewfinder – depending on which one you previously had selected – blinks into life, a process taking only around a second. The Fujifilm FinePix S9200 is quick to determine focus and exposure with a half press of the shutter button, only taking 0.3 seconds to lock onto the subject in ideal lighting conditions. Both JPEGs and RAW files are quickly committed to SD / SDHC / SDXC memory in single-shot mode with only 0.5 second pause between each one.

The S9200 has a chunky, ridged shooting mode dial which is reminiscent of those found on, yes you've guessed it, DSLR cameras. Ranged around the dial, which turns with just the right amount of resistance for it to lock firmly into place at each setting, are the expected shooting options, such as full auto, program, shutter priority, aperture priority and manual modes, along with a customizable mode via which favoured shooting settings can be saved for rapid access, plus a scene position mode that's pre-optimised for common subjects.

In addition, there are several more shooting modes that are particularly noteworthy. First up is the SR Auto mode, which is an 'auto everything' scene recognition mode. Although far from infallible - if you're not paying close attention and it's presented with a busy scene it will call up landscape when macro is needed and vice versa – it instantly makes the S9200 more beginner friendly, automatically recognising 10 basic scenes and applying the right mode.

Next is the rather misleadingly named Advanced mode, which actually has five options that are well suited to all experience levels. The first shooting mode is the Advanced Filter, which as the name suggests houses a range of artistic filters that can be applied to your photos as you take them. The Pro Low-light mode uses multi-bracketing technology, taking a series of four high sensitivity/low-noise shots in quick succession and combining them into an image with less noise than the single exposures. In the HDR advanced mode the Fujifilm FinePix S9200 can combine three seperate images into one with greater dynamic range. The Natural Flash mode takes one shot with flash and one without at the same time, while the Zoom Bracketing mode takes three shots with a single press of the shutter button, at varying degrees of magnification (original, 1.4x and 2.0x).

The final shooting mode on the top dial is the Panorama option, clearly inspired by Sony's popular Sweep Panorama function. This lets you capture a 120, 180 or 360 degree panoramic image very easily without the use of a tripod. All you need to decide is whether you would like to start from left or right, top or bottom, then press and hold down the shutter release while doing a "sweep" with the camera in hand. Exposure compensation is available before you start the sweep, with the exposure fixed once you depress the shutter button. After you are done with the sweeping, the camera does all the processing required, and presents you with a finished panoramic image.

Although undoubtedly fun, there are a few catches. The final panorama is of relatively low resolution, and if you do the sweeping too slowly, or you let go of the shutter release button too early, the panorama will be truncated. If the exposure varies throughout the scene, then some areas will be over or under exposed, depending upon the exposure value that was chosen as the panorama was started. Finally, people and indeed anything that moves in the frame are recorded as several ghost outlines, which means that you can really only record static, empty scenes, something that Sony have solved in the latest iteration of their Sweep Panorama feature.

Moving to the rear of the Fujifilm FinePix S9200, your attention is immediately drawn to the large 3-inch monitor, which curiously only offers 97% scene coverage, not 100% as you'd expect, and a reasonable resolution of 460K dots. Above the LCD screen is a small button for swapping the display between monitor and the 201k-dot resolution electronic viewfinder, again complete with 97% scene coverage, and asurrounding eyecup. The EVF also has its own dioptric correction wheel to its immediate left, which is far less stiff and physically larger than found on competing models, meaning that for the myopic adjustment can be made in a fraction of a second. The viewfinder display is rather small and dim, making the temptation to predominantly utilise the LCD screen below almost overwhelming.

To the right of the Fujifilm FinePix S9200's LCD screen is the one-touch movie record button. The S9200's full 50x zoom range can be accessed in the Motion JPEG format movie mode, with the S9200 offering full 1920x1080 pixel footage at up to 60 frames per second with constantly adjusting auto exposure and auto-focus with stereo sound. You can also manually focus during movie shooting. It can record video clips up to 29 minutes long for the 1920x1080 and 1280x720 pixel formats, with longer times available for VGA and SVGA modes. The dedicated Movie button on the rear makes it quick and easy to shoot a movie without missing the start of the action, and there's a mini-HDMI port for connection to a HDTV (cable not supplied). You can select one of the Film Simulation or Advanced Filter modes to give your footage a more creative look, and there's the option to take a still photo at any time during movie recording.

In addition to these "normal" movie modes, the S9200 also offers several high-speed modes. There are three different speeds on offer - 480, 240 and 120fps, with the file size varying from 320x120 to 640x480 pixels. This slow-motion effect is initially very appealing and sure to impress your friends, but there are some drawbacks to be aware of. Sound isn't recorded at all, horizontal bands can appear as the lighting fluctuates, and the actual sizes of the recorded movies are pretty small.

Underneath that is a self-explanatory playback button for quickly viewing captured images. Below that again is a familiar four-way controller with a dual-purpose menu/OK button at its centre. Ranged at north, south, east and west around this control are variously, the customisable Function button which can be set to one of 10 key options (also doubling up as a file deletion button when in playback mode), the various flash modes, the self timer options, and shifting focus from infinity to either macro or super macro. The rather thin scroll wheel is used to set the aperture/shutter speed in the advanced shooting modes.

Press the Menu button in the shooting mode and you get a comprehensive choice of options from two main folders, Shooting and Set-Up, with up to 6 screens containing 6 icons per screen. Most of the options are the "set once and forget" kind, so you won't have to dip into the menu system too often. Below the navigation pad is a dual-purpose control marked Display/Back that switches between the various LCD modes and also allows you to retrace your steps at any point.

The right hand flank of the Fujifilm FinePix S9200 features a chunky rubber flap hiding the mini-HDMI port and the regular USB / AV out sockets. The base of the Fujifilm FinePix S9200 features a screw thread for a tripod, sadly made of plastic and not in line with the lens barrel, and a sliding door hiding the compartment for the batteries and the SD / SDHC / SDXC card slot. The S9200 use AA-type batteries, with battery life ranging from 300-700 shots depending upon which type you use. There are recessed metal eyelets on either side of the body for attaching the provided shoulder strap.