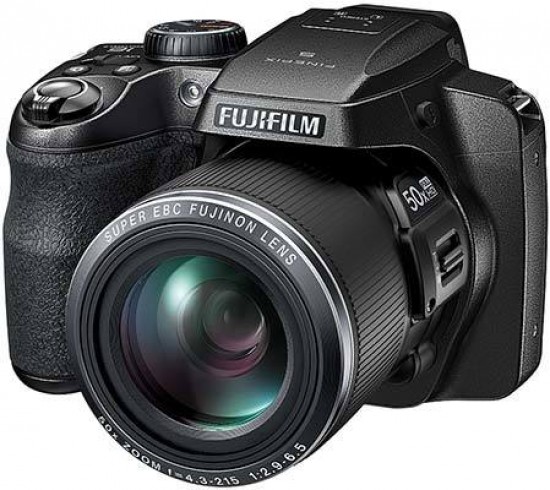 The Fujifilm FinePix S9900W is a bridge camera which features a 16.2 million pixel 1/2.3 inch back side illuminated CMOS sensor. As it's a bridge camera, one of its key selling points is its extensive zoom range: a 50x optical zoom, which covers a 35mm equivalent focal length of 24-1200mm, is available. At the widest point of the lens, the maximum aperture is f/2.9, rising to f/6.5 at the telephoto end of the lens. An intelligent digital zoom is also available. On the back of the camera is a three-inch, 460k-dot screen, which is joined by a 0.2-inch, 920k-dot electronic viewfinder. The Fujifilm FinePix S9900W is capable of recording in full HD (1080p) and also has built-in Wi-Fi. A slightly cheaper S9800W is also available with the same specifications but missing the Wi-Fi. Using the Wi-Fi you can remotely control the camera, or send shots to your phone for sharing over social networks. Powered by AA batteries, Fujifilm claims that a set of standard batteries will yield around 400 shots. The Fujifilm Finepix S9900W retails for £179 / $349.

The Fujifilm FinePix S9900W is quite a chunky camera, even by bridge camera standards, so at first glance you'd be forgiven for assuming it was a small DSLR camera. There's a textured coating which surrounds the grip which both helps to make it feel more secure in your hand, but also adds an air of quality.

There's also an indent on the grip for your middle finger to sit, while your forefinger rests nicely on the top of the camera ready for pressing the shutter release.

Although you'll probably feel most comfortable using the Fujifilm FinePix S9900W with two hands, the second one supporting the lens as you take shots, it's not so heavy as to prevent one-handed shooting if you prefer it.

On the top of the Fujifilm FinePix S9900W, there's a fairly large mode dial which houses all of the different exposure modes which the camera offers, including fully automatic, semi-automatic modes (such as aperture priority and shutter priority), as well as manual and other useful modes, such as “advanced” (where you'll find a number of different creative options), and panoramic mode. The dial is reasonably stiff, so it's unlikely you'll accidentally knock out of place and away from the shooting mode you need.

Also on top of the camera, you'll find a sliding switch which you need to hold down for a couple of seconds to switch the camera on or off. There's a button you press to allow you to alter exposure compensation, first you press it, then you use a scrolling dial on the back of the camera to dial in as much negative or positive compensation that you need.

The final button found on top of the Fujifilm FinePix S9900W is the drive mode button, which allows you to switch between the several drive modes the camera offers, including fast continuous shooting, best moment capture and AE bracketing.

When you have Best Moment Capture selected, you can hold down the shutter release button and the camera will take a series of shots in fast continuous mode. Upon entering playback, you'll see that the camera has chosen a frame which it believes to be the best shot, but you can also choose from the others which have been taken if you disagree.

There are two ways to zoom the Fujifilm FinePix S9900W's lens in and out, you can use either the switch around the shutter release, or a switch on the side of the lens. The latter is handily reachable by the thumb if you're using both hands to operate the camera, and is perhaps better than the switch around the lens to keep the camera steady when shooting at the telephoto end of the lens.

Moving to the back of the Fujifilm FinePix S9900W, there's a relatively small viewfinder. You need to press the EVF / LCD button to activate it, which makes for a less than seamless transition compared to those cameras which have sensors on the viewfinder. As it's quite small, it's something that's probably only going to be really useful when bright conditions make the rear screen unusable. If using a viewfinder is a deal breaker for you, there are other cameras equipped with better devices on the market.

The rest of the Fujifilm FinePix S9900W's buttons are grouped on the right hand side of the camera, which makes it handy to change all of the settings using just one hand.

You'll find a dedicated video record button, and a playback button just near the rear thumb rest. The video record button is placed nicely away from most of the other buttons, making it unlikely that you'll accidentally press it and record movies you don't want to.

A four way navigational pad which doubles up as a scrolling dial is what you'll use to make the majority of changes to key camera settings. Additionally, each of the directional keys has a double purpose, for instance the left key controls focusing type, switching between macro and standard focusing. The right key controls flash settings, while the down key accesses timer mode.

The up key is a customisable function key. By default it accesses ISO sensitivity, but there are a further 10 different functions you can assign to it via the main menu. To use the button, press it, the again use the scrolling dial to change to the setting you want.

When working in manual mode, you press the exposure compensation button to switch between adjusting aperture or shutter speed using the scrolling dial. For aperture, there are only two or three different settings available, depending on the focal length you need, which seems a bit of a shame, and makes it not quite as manual as you might like.

The main menu is divided into two sections - a shooting menu, where you can make changes to camera settings, such as ISO, image size, white balance and so on, and a second menu for changing other settings, such as date and time. It's fairly easy to navigate and get to know with just a little exploration.

Setting the Fujifilm FinePix S9900W up for wireless communication with your smartphone is pretty easy, but the app itself is a little simple. All you can do is zoom the lens in and out, set the timer off, activate the flash (if the flash has already been manually raised). It would be nice to see a few more options here, such as being able to set exposure compensation, but it's reasonably handy for taking selfies or group shots. You can also playback and download images to your phone for quick sharing on social networks or via email.

In good light, autofocusing speeds are decent, if not quite the quickest on the market. As the light drops, it can take the camera 2-3 seconds to find focus on trickier subjects, but it's rare for a false positive to be produced. In terms of operational speeds, the Fujifilm FinePix S9900W could be better - when the camera needs to process something reasonably complex, such as a burst of photos, then it can be a few seconds before it's ready to shoot again.