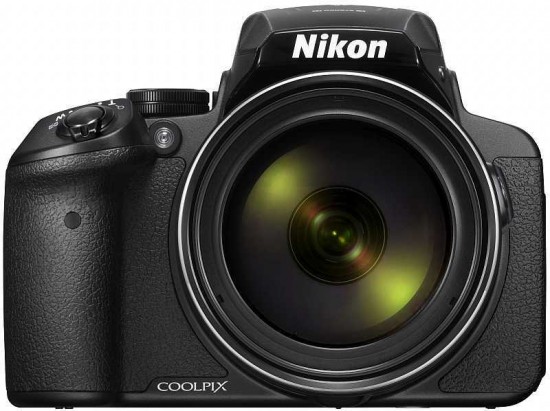 The Nikon Coolpix P900 is a bridge camera which features the current market leading zoom ratio of 83x optical zoom. That gives you an equivalent of 24 - 2000mm in 35mm terms. There’s also a Dynamic Fine Zoom - a type of digital zoom - which boosts this up to 166x, or 4000mm equivalent. At the widest point of the lens, it had an f/2.8 maximum aperture, rising to f/6.5 at the furthest reach. At such extremes of zoom, the camera needs to have a decent optical stabilisation system in order to cope with image blur. To that end, Nikon has included a Dual Detect Optical VR system, which should give a 5-stop advantage. The P900 features a 1/2.3 inch 16 million pixel back-illuminated CMOS sensor, which is the same as the sensor found in the Nikon P610. Other features include a 3-inch, 921k dot articulating screen, an electronic viewfinder and built-in Wi-Fi, GPS and NFC. The Nikon Coolpix P900 is available in black for £499.99 / $599.95.

The Nikon Coolpix P900 is a very large camera - even by bridge camera standards. It’s also pretty heavy too, and it’s about as big and heavy - or perhaps even bigger and heavier in some cases - than the average DSLR with 18-55mm kit lens attached.

Of course, the zoom lens can manage a lot more reach than the 18-55mm zoom ratio, going up to a staggering 2000mm, so if zoom is important to you, then this large size is something you should expect. The lens itself is very large, and it’s probably fair to say that the first impression of the camera is that it looks a little unbalanced. With the lens extended, even more so.

The grip, while reasonably large, could do with being a little larger to help offset the weight from the lens. That said, it has a nice coating which gives the camera an air of quality.

The flash on the top of the Nikon Coolpix P900 also has to be large to give it enough size to reach over the top of the lens, so this is also looks a little odd the first time you deploy it. Overall, you do get used to the large size of the camera and it is of course much lighter than the equivalent DSLR and the set of lenses you would need to cover the range which this offers.

On the top of the camera you’ll find a mode dial which allows you to choose between the different exposure modes which the camera offers. As well as automatic, scene and effects modes, you’ll also find Program, Aperture Priority, Shutter Priority and Manual Mode. Handily, there’s also a space for you to save a group of custom settings, which is useful if you like to shoot one particular kind of way often (such as low light for instance).

Also on top of the Nikon Coolpix P900 you’ll find a scrolling dial which has different functions depending on the shooting mode you’re in. If you’re in manual mode, or shutter priority mode, you can use it to alter shutter speed. It’s also used to scroll through options when using Special Effects mode.

The function mode, also on top of the camera, can be used as a sort of quick menu. By default, it is used to control metering, but if you scroll to the bottom of the dialogue box which appears when you press it, you can access other functions, such as white balance, ISO and AF area mode.

You can extend the Nikon Coolpix P900’s zoom in one of two ways. There’s a standard rocker switch around the shutter release on top of the camera, or there’s another switch on the lens itself - the latter is very easily reachable with your left thumb when you’re holding the camera and makes for a quick extension when you need it. A very useful button next to the switch on the lens allows the lens to zoom back out to help you reframe a subject. One of the problems with very long zooms is that if something moves ever so slightly, it’s completely out of the frame. Hold down this button on the side of the lens and the lens will zoom out, you can find the subject, and release the button and you’ll be taken back to whatever focal length you were using previously.

Moving to the back of the Nikon Coolpix P900, all of the buttons are grouped on the right hand side, which makes it easy to change settings with just your right hand. There’s a decent range of buttons, which allow you to make quick changes to the majority of settings.

You’ll find a scrolling dial, which like the dial on the top of the camera has different functions depending on the shooting mode that you’re currently working in. If you’re shooting in aperture priority mode, you can use it to set aperture, for instance. The dial also acts as a four way navigational dial, with each direction accessing a specific function also. The up directional key accesses flash, left accesses timer mode, down accesses macro focusing and right access exposure compensation.

If you have set AF area mode to manual (which you can do from the main menu), then you can set the AF point by pressing the OK button in the centre of the navigation pad and then scrolling around the screen to the point you want to use. Using AF focusing allows you to get very close to the subject, almost to the point where you’re touching it with the lens.

The other buttons you’ll find on the back include a playback button and the main menu button. You can also change the display function of the LCD screen by pressing the Display button. There’s another button next to the viewfinder which switches it on or off, but there’s also a sensor underneath the viewfinder itself which will automatically detect when the camera is lifted to your eye, switching the viewfinder on, and the screen off. This makes for a seamless way to use the camera, more akin to using a DSLR and is a nice feature to see.

The screen itself can be fully articulated, which is helpful for both shooting from awkward angles and it also means that you can fold the screen away to protect it when you’re not using it.

For the most part, the Nikon Coolpix P900's main menu is sensibly arranged into different sections, and it doesn’t take too long to get to know where everything is.

There’s a dedicated Wi-Fi button on the back of the camera, which if you press activates the camera’s Wi-Fi functionality. After you’ve done that you can connect to the camera from your phone or tablet’s Wi-Fi settings and launch the free Nikon Wireless Utility app. It would be nice if Nikon could develop a more extensive or complicated app for use with its more advanced cameras. All you can do is fire off the shutter release and extend the zoom - slowly. While this is useful for group shots and self-portraits, it’s less useful for more advanced types of shooting when you can’t alter settings.

If you have an NFC enabled device, connecting the Nikon Coolpix P900 to your phone is even easier. All you need to do is hold the device to the NFC chip on the side of the P900. If you don’t already have the Nikon Wireless Utility app, you’ll be prompted to download it, but if you do, it should launch automatically when the NFC connection is detected.

Autofocusing speeds are generally pretty quick, especially when shooting in good light. Speeds can be a little slower when the camera is trying to focus on something at the far end of the telephoto range, but that’s to be expected. When light levels drop, focusing speeds also drop a little too, but it’s not too bad.

Otherwise, operational speeds could be better. Occasionally, it takes a couple of presses of the on/off switch to get the Nikon Coolpix P900 to respond, and the playback button is also similarly unresponsive at times. Scrolling through the menus is generally quite quick however.