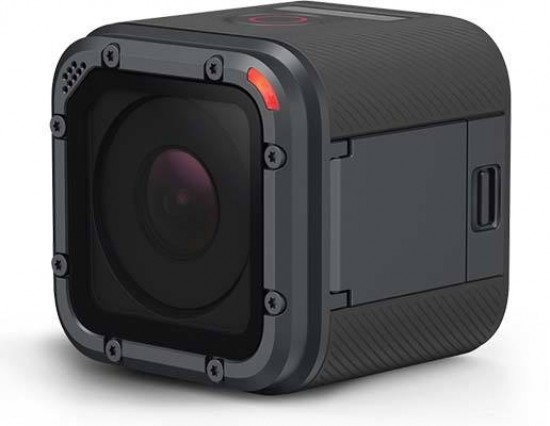 The GoPro HERO5 Session was announced at the same time as the HERO5 Black, and is intended as an entry-level action camera - or some people may want to consider it as a second camera for the more advanced HERO5 Black. Waterproof to 10 metres (33ft) without a housing, the GoPro HERO5 Session has been designed with adventure type activities in mind. The Session can take 10 megapixel still photos, and videos up to a resolution of 4K. It has inbuilt Wi-Fi and bluetooth for connecting to your phone, and accepts Micro SD cards. The GoPro HERO5 Session costs £249 / $299.

The GoPro HERO5 Session is a perfect cube shape. It’s extremely small - and while you could fit it in a pocket, it’s not flat so there would be a noticeable bulge.

The quickest and easiest way to use the camera is simply to press the shutter button. If you do that, then the camera will start recording in the last setting you’d been using. Once you’re finished recording, you press the button again and it will stop recording and switch off the camera automatically - great for saving battery life.

Also on the top of the GoPro HERO5 Session is a small screen which you can use to see the settings you are changing. There’s no main screen to display your image, so composition and so on is down to guesswork.

If you want to change settings before you start recording, switch the camera on by holding down the second button which is on the back of the camera. Press it again and you can scroll through the different menu options.

The first thing you’ll come to is “Enter Photo Mode”. This will change you from taking videos to taking still photos. If you want to do that, press the shutter button at the top. After that you will be able to change various settings by again pressing the menu button, then the shutter button again. It sounds quite complicated - and it is a little fiddly, but once you get used to how it works, it starts to become a little more second nature.

When shooting Photos you can either shoot in Wide or Linear, the latter giving you a more “natural” feel and correcting for the distortion that would otherwise occur with the wide angle lens. You can also shoot in bursts of photos, or switch on “night photo”. Switching on night photo basically gives you a longer exposure time, making it ideal for shooting in low light conditions - however you will need to stabilise the camera somehow.

If you want to go back to shooting video, press the menu button, then keep pressing until you get to “camera settings”, press the shutter button and again to select the camera icon, changing it from photo to video. Again, it sounds more complicated than it actually is.

There are other options that you can choose by moving through the main menu. You can switch off the camera in this way, you can also switch video stabilisation on (not available if you’re shooting in 4K), and you can access connection settings in order to connect the camera to your phone.

If you connect to your phone, you can use the phone to compose your image accurately as it will show you what the camera is seeing. The app is easy to use, and it’s free to download. Connecting, as you might expect, involves a series of menu button and shutter button combinations, but the app itself will tell you what to do to make it easy.

Through the app you can also subscribe to GoPro Plus, which means you’ll be able to automatically upload images and video to the cloud as long as the camera is plugged in and connected to your phone. It’s a great way to make sure you never lose your footage - but you have to pay for it.

The GoPro HERO5 Session is waterproof without any need for a housing. You must make sure that the door which hides the memory card and charging socket is firmly closed. It’s pretty difficult to accidentally open it, which is good news for when you are using it underwater that you don’t need to worry about water getting into it.

Unlike the Go Pro HERO5 Black, the battery of the HERO5 Session can’t be removed, so that means you’ll need to charge it before you can use it, rather than just swapping out batteries. It pays therefore to switch it off between recordings. You can charge with a portable battery charger (not sold with the camera), which is a good idea if you think you’ll be taking a lot of shots / videos.

The camera accepts Micro SD cards, with a slot just next to the charging port. When you’re done pushing the card or cable in, just push the door closed and wait for the click noise.

One of the fun new features of the GoPro HERO5 Session, which it shares in common with the more advanced HERO5 Black is that it can be controlled by voice. You need to switch this on first via the main menu, but once you do you can use your voice for a number of functions. You need to say “Go Pro” and then a command - a list of which can be found in the camera’s manual, including “Go Pro Start Recording” or even “That was sick” to insert a highlight tag while recording which should make it easier when editing your videos. When you activate it via voice, then you’ll see a red light appear so you know that it has worked. In practice, if the atmosphere is quite noisy, the voice activation may not work as well as in quieter environments, but it’s great (when it works) for situations when touching the camera to start recording may not be practical.

The GoPro HERO5 Session comes with a mount in the box, which allows you to attach the GoPro to a range of accessories. Lots of them are available, including a chest mount, a head mount, a jaw grip and the handler, which floats in water and is useful in case you drop the camera.