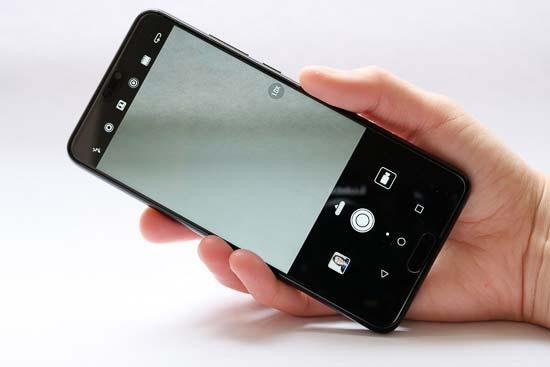 Huawei introduced its two new flagship phones at the same time, the Huawei P20 and the P20 Pro.

While the P20 Pro has the world’s first triple-camera setup, the P20 is more of a direct follow-on from its predecessor, the P9. The company decided to jump straight to 20 from 9 to demonstrate the big jump in technology.

Similarly to the P20 Pro, Huawei is aiming this phone towards photographers, especially for those who are on a stricter budget (it retails for around £200 cheaper than the P20 Pro at the time of writing). Along with the dual Leica lens setup, there’s also the option to shoot in raw format, use manual controls and other interesting features such as “Night Mode”.

As well as buying the Huawei P20 outright, you can also buy it as part of a phone contract with most of the major networks offering it.

The Huawei P20 uses a 5.8-inch RGBW screen, as compared to the bigger 6.1-inch OLED Full View screen of the P20 Pro. The smaller size of the P20 might be better suited to those who prefer a smaller phone. While the screen is of noticeably lower quality when holding it next to the P20 Pro, used in isolation the screen is very good indeed.

With a slim body, Huawei has never-the-less managed to incorporate a high-capacity, 3400mAH battery. This is around 25% higher capacity than the iPhone X, in a slimmer body. It’s not quite on a par with the 4000mAH battery of the P20 Pro, but should still last a full day in most ordinary situations.

Like the P20 Pro, Huawei has gone for a very sleek design with the standard P20. It has an extremely shiny surface, with rounded edges - the front facing camera and the fingerprint sensor are at opposite ends of the screen for a symmetrical look.

As seems to be the trend for most modern smartphones, the bezel of the phone is extremely slim. Huawei has adopted a “notch” design for both the P20 and the P20 Pro, similar to that seen on the iPhone X. Both notches are significantly smaller than the iPhone X’s, however, leaving more room on either side for app notifications and so on.

You can start the camera directly from the lock screen by swiping up from the bottom right hand corner of the screen. When you do this, you’ll be able to look at all the photos you’ve taken in the current session, but you’ll need to unlock the phone to see any older photos.

Alternatively, in the standard setup, the camera icon is displayed at the bottom right-hand corner of the screen when unlocked, so you can tap on that to open the camera app when you need it.

Finally, there is also the option to activate “Ultra Snapshot”. With this, you can take a picture directly from the off screen by double pressing the volume down button - the photograph will be taken automatically so you won’t have any time to compose your shot, so it’s better to use this for spur of the moment shots that might pass by quickly.

Although launched at the same time as the P20 Pro, there are some key differences between the native camera app used on the standard P20 and its more advanced sibling. There are no modes to swipe through at the bottom of the screen, instead you need to swipe left to bring up a row of different mode options. It’s here you’ll find “Night Shot” “Monochrome”, “Filter” and so on. If you want to switch to shooting in “Pro” mode, instead of it being a specific mode to select here, you need to swipe from the bottom of the screen, where you’ll see a range of options that you can change.

For more settings changes, you can swipe right, where you’ll be able to change resolution, switch on raw format (when shooting in Pro mode), add watermarks and so on. It’s not a massive difference from the P20 Pro, but it’s not entirely clear why the company has decided to make the interface different at all. Another difference is that rather than “Aperture” and “Portraits” being specific modes, they’re both accessed by tapping an icon at the top of the screen.

Let’s talk a little more about the different modes offered by the camera. Night Mode allows you to shoot low-light shots handheld. A shutter speed of up to six seconds can be deployed, and you can actually see the image “building up” on the screen - you don’t need a tripod to steady the camera. You can select an ISO and a shutter speed yourself, or you can let the camera decide that for you.

In the standard Photo mode, Huawei’s Artificial Intelligence will determine the best settings for the scene, depending on what it thinks you’re taking a photo of. The phone is pretty good at recognising a wide array of different subjects, including dogs, landscapes, flowers, food and so on. For each of these, a different group of settings (not specified) will be applied.

With Pro Mode, you can alter metering, shutter speed, ISO, exposure compensation, AF mode and white balance. It’s not possible to alter the aperture of the lens, which is fixed. “Aperture” mode is software based, and can’t be used in conjunction with pro mode. With this, you can select an aperture, ranging from f/0.95 up to f/16. The image will be taken with the effect of this aperture applied - as it’s not a physical effect, you can alter this after the fact, by changing the focus point and the level of blur, if you like.

Monochrome mode utilises the specific monochrome sensor that the P20 offers, to give black and white images. With this you can still use “Pro” mode, but you can’t shoot in raw format - being as this mode is using a mono-only sensor, you wouldn’t be able to retrieve colour information even if you could shoot in raw format, though.