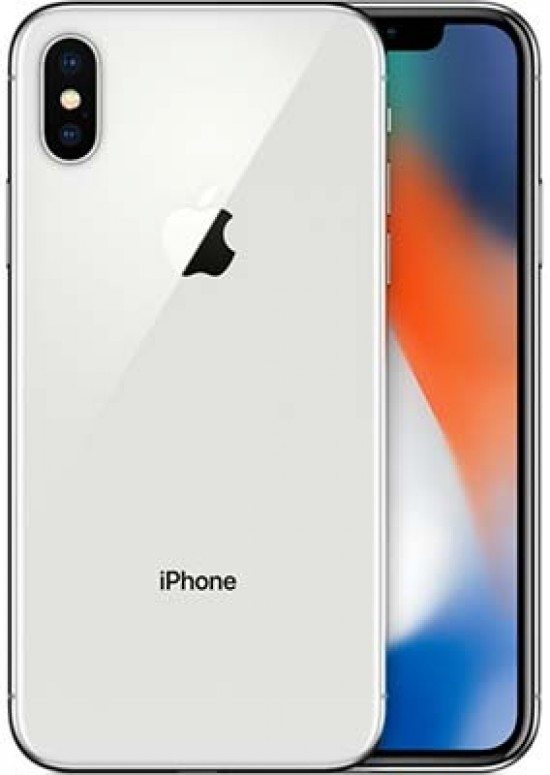 The iPhone X is Apple’s 10th anniversary iPhone. Announced at the same time as the iPhone 8 and the iPhone 8 Plus, but going on sale a little later, the device is Apple’s flagship phone and features all of its latest camera technology.

On the back of the phone are two cameras, one wide-angle (28mm equivalent) and one telephoto (56mm equivalent), both with 12 megapixel sensors. The wide angle lens has an f/1.8 aperture, while the telephoto lens has an f/2.4 aperture. Both lenses are equipped with optical image stabilisation.

Switching to the front, there’s a 7 megapixel camera, with an f/2.2 lens. This comes with its own Portrait Mode - something which has previously only been available via the iPhone’s back camera, but enabled on the iPhone X thanks to the front-facing True Depth camera.

Other interesting specifications include the ability to record video at 4K at 60fps - so far one of the only smartphones on the market to offer this functionality. There’s also a Quad LED true-tone flash.

You can buy the iPhone X with either 64GB of internal storage, or 256GB - with the latter naturally being more expensive. There’s no way to expand the physical memory of the iPhone X.

The iPhone X marks the first time that an iPhone has used an all-screen display. To make this possible, Apple has removed the home button usually found on the bottom of an iPhone. This means you’ll have to learn a series of new gestures, if you’re used to working with an existing iPhone, including bringing up the quick menu, and switching between apps - but it doesn’t take too long to get used to them once you’ve been using the iPhone X for a while.

With a glass back, the iPhone X has a nice weighty feel to it - and by using the whole screen, the overall look  and feel of the phone is more premium than the iPhone 8 Plus - which has a smaller screen but a bigger overall body. One downside of the glass back is that it attracts fingerprints pretty quickly - you might want to invest in a case for it. Using the iPhone X one-handed is much easier than with the more unwieldy iPhone 8 Plus.

If you’ve ever used an iPhone before, there isn’t too much difference here on the iPhone X’s native app than those that have come before it. The biggest change is the addition of the new Portrait Mode features, which we’ll discuss in more depth shortly.

Along the bottom of the camera window (if you’re holding it in portrait orientation), you’ll see the default shooting mode is Photo. You can swipe right or left to choose a different shooting mode - left for video, slow-mo and time-lapse, and right for square, Portrait Mode, and panorama.

Along the top of the screen is a few other icons of note, including the flash icon (to switch between off, on and auto), the Live Photos icon (which allows you to capture still images with 1.5 seconds of video footage before and after the photo is taken), the self-timer icon, and the filters icon to choose between different inbuilt filters. One thing which is missing from these options is the HDR icon - previously the iPhone allowed you to switch this on and off within the camera app itself. Now, HDR is switched on to Auto by default. Therefore, if you want that control back, you need to go into the main settings menu and switch “HDR Auto” off - you’ll now be able to switch between HDR on or off in the native camera app.

Another thing that you may not have seen before, if you haven’t used a recent Plus model, is the zoom button. This is represented by a “1x” in a circle - tap it to switch to “2x” and back - essentially this is allowing you to switch between the wide-angle lens and sensor, and the telephoto lens and sensor. You can also use digital zoom by pinching on the screen - up to 10x is available.

You can change the autofocus point by tapping around the screen. This will also affect the metering, so if you’re trying to photograph a high contrast scene, it can pay to tap around the screen until you get the best balance of highlights and shadows. You’ll also see that when tapping a point on the screen, an icon appears in the shape of a sun - this is a brightness control which you can slide up and down to brighten or darken the shot.

At the very bottom of the screen, you’ll see the shutter release button (you can also use one of the physical buttons on the side of the phone to release the shutter if you prefer), plus an icon to use to switch to the front facing camera. You can also tap to see the images you’ve previously taken - note that if you launch the camera from the lock screen, you’ll only be able to see the photos you’ve taken in that particular shooting session, and you’ll need to unlock it fully in order to see the rest of your photos.

The inbuilt camera app for iPhones is very simple. You don’t get the opportunity to change key camera settings, such as metering, shutter speed or white balance. There are various apps available to download which offer that functionality, with varying degrees of success. Apple opened up the possibility to shoot raw photos some time ago, but, it’s still not possible to do that via the native camera app - again there are several on the market which allow it.

For the Portrait Mode, the iPhone X has added a host of new “lighting” effects for your portraits. These are Natural Light, Studio Light, Contour Light, Stage Light, and Stage Light Mono. You can choose any of these if you shoot in portrait format, but if you want to shoot a portrait in landscape format, only the first three will work. As this is basically an effect, you can change which lighting mode you’ve used after you’ve taken the shot if you like - but only if you’ve shot the photo in Portrait Mode, not in the standard Photo mode. Both the front camera and the rear cameras have the lighting mode, so you can use it either when you’re taking portraits of somebody else, or when taking portraits of yourself - this marks it apart from the iPhone 8 Plus, which doesn’t have the TrueDepth front-facing camera needed in order to facilitate both Face ID and the front-facing Portrait Mode.

You can also use the Portrait Mode if you’re trying to take images with a shallow depth of field effect - in other words, it doesn’t necessarily need to be a person you’re shooting in order for it to work.

By default, the iPhone X shoots in the new HEIC format. This format is designed to maximise the quality of the image, while not taking up as much space as JPEG. You can switch back to using JPEGs if you prefer, which you can find in the main settings menu. Compatibility with HEIC is becoming more prevalent now, with Adobe releasing an update to be able to read the files quite recently. It also works with Apple’s latest operating system, High Sierra. As you can’t expand the iPhone X’s physical memory, it’s worth shooting in HEIC to save space. You can easily convert HEIC files to JPEGs if you need to share them - the iPhone will do it automatically if you’re sending files via WhatsApp, for example, so there’s no need to worry about somebody else not being able to read them.

Another thing you’ll need to have to change in the main settings is the format for your videos. You can shoot at 4K up to 60fps, but, you’ll need to shoot in the High Efficiency format to do that. Otherwise, you can shoot up to 30fps in 4K instead. You also have the choice to shoot at Full HD too. You can shoot slow motion video, with the option for Full HD in this format meaning you’ll need to shoot in the high efficiency format as well. Again, it keeps the app very simple, but it would be appreciated if you could change video resolution directly within the native camera app, rather than having to dive into the main settings every time.