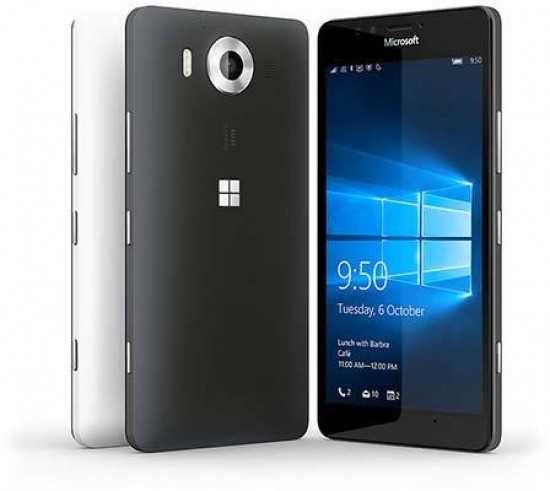 The Microsoft Lumia 950 was announced towards the end of 2015 and is a flagship phone for the company, introducing the Windows 10 operating system to mobile phones.

Other specifications include 4K video recording, the ability to expand the phone’s memory via a MicroSD card, a 5.2 inch WQHD AMOLED screen and of course the ability to make phone calls. There’s also a 5.7 inch “XL” version of the phone available.

The main purpose of this review will be to look at the performance of the two on-board cameras, and how the phone works in other photographic related ways.

With a 5.2 inch screen, the Microsoft Lumia 950 is on the large side of phone sizes, but it doesn’t venture into “phablet” category.

In order to insert the SIM card, and the optional Micro SD memory card, you’ll first need to remove the back of the phone. There’s a small indent on the bottom of your phone which you need to slide a nail into and push the back of the phone off. Once you’ve done that you’ll be able to remove the battery and insert the SIM card. You don’t need to take the battery out to insert and remove the memory card. Further good news is if your battery life starts to diminish as the phone gets older - unlike some phones (for example the iPhone), the battery can be replaced by a new one if necessary.

To charge the battery, you’ll need to use the supplied cable or charger as Microsoft uses a proprietary connection, rather than the microUSB used by many Android phones - bad news if you run out of juice while out and about and can’t find a replacement.

The only physical buttons that can be found on the Microsoft Lumia 950 are all located on the right hand side of the phone. There’s a power on button, a rocking switch can be used to adjust volume and a third button which you can use as the camera shutter release.

As is common with most phones, you’ll undertake the rest of the operation via the onscreen icons, three of which will always appear at the bottom of the screen.

There’s a back button, a search button and a Windows / Home button which allows you to get back to the home screen whenever you need to. You’ll probably find that most of the time you’ll need to use the phone with two hands, however, if you hold down the windows icon on the touchscreen, you’ll enter into “one-handed operation” mode, which pushes down everything on screen into the bottom half of the screen so you can use just one hand (or thumb) to reach whatever you need. Once you’re done, you can either hold down the windows button again, or tap in the top half of the screen to re-enter full screen mode.

The Lumia 950 was the first phone to be equipped with the Windows 10 operating system, and if you use a Windows computer it’s likely you’ll feel relatively at home with the operating system here. It’s pretty different to iOS or Android though, so if you’re moving over from a different type of smartphone, you might take a bit of time to get used to where everything is.

There are two ways to access the onboard camera app on the Microsoft Lumia 950. If you hold down the button on the bottom right hand corner from the lock screen the camera will start - you can then use the same button to take a shot.

Alternatively you can tap the camera icon from the main menu screen. Once you’re in the camera app, it’s a reasonably straightforward process - you can choose to shoot in completely automatic if you wish.

If you want to change some settings, you can expand the quick menu on the top of the screen, where you’ll find options for altering white balance, ISO (sensitivity), shutter speed, exposure and focusing. If you tap any of these icons a virtual dial will appear on the screen and you can use your finger to make adjustments. You can drag the dial all the way down to the bottom to take it back to “automatic”.

It’s a shame you can’t set aperture with the camera, as it would have made it fully manual. However on the plus side, you can shoot in the universal DNG raw format. To do this you need to tape on the three dots icon in the top right hand corner of the screen where you can find an extra settings menu. If you scroll down you’ll find “Image size for main camera”, where you can choose to shoot just in JPEG at 16MP or 8MP, or JPEG 8MP + DNG 16MP together. Alternatively you can shoot JPEGs or RAW at 19MP if you shoot in the 4:3 ratio. There doesn’t seem to be a way to shoot both JPEG and DNG at 16MP/19MP at the same time though.

There are a few other settings changes you can make from this menu, including aspect ratio, whether to display a framing grid, whether to use the focus light, whether to capture “living images”, video quality and how the camera button acts if you hold it down (you can either have it activate video recording, take a burst of photos, or do nothing at all).

Another menu you’ll find after pressing the three dots icon is named “Lenses” - this is basically where you can add extra camera apps from the Windows app store. Although Windows mobile doesn’t have quite so many apps as Android or iOS, there’s still quite a few to choose from in the app store which give you extra functionality - many of which are free.

It’s also perhaps worth noting, giving its popularity, that while Instagram is available for Windows mobile, it’s currently still in beta and won’t appear as part of the “lenses” area of the camera app. Presumably, the development of the Instagram app will depend on its popularity.

As with most smartphones, the Lumia 950 doesn’t have an optical zoom. You can utilise the digital zoom by swiping upwards on the screen, and downwards again to zoom back out. When you zoom in, the image will become very pixellated - but this won’t be reflected in the final image as shot by the camera.

The Microsoft Lumia 950 also gives you the option to create what it calls “living photos”. This essentially means that it will record a couple of seconds of video to accompany every photo. Cleverly, the 950 will only do this if it detects motion - so if you’re photographing a person waving (for example), then a living image will be created. If you’re just photographing a still life, such as a flower, then just a standard still image will be recorded. You can’t create living images when shooting in raw format though, which is a bit of a shame (even if you have dual raw and JPEG switched on). To play back the “living image” on the phone, you press down on the image you’re looking at and the short video clip will start to play. You can also export the video so that other people can see it, too. While you can’t switch living images on or off for individual photos, you can choose to either always record them (when motion is present), or never record them.

Focusing speeds for the Lumia 950 are pretty swift when shooting in good light, however it can occasionally struggle with focusing on close foreground objects, jumping to focus on the background subject even if you have tapped on the foreground object. It’s worth double checking such photos when you take them to make sure what you wanted to be in focus, actually is.

Operating the Microsoft Lumia 950's camera is also very quick, as is using the phone during day-to-day operation. It’s worth noting however that during testing the phone I was only really using the camera and associated apps, not a myriad of other apps at the same time as you may do during normal operation.