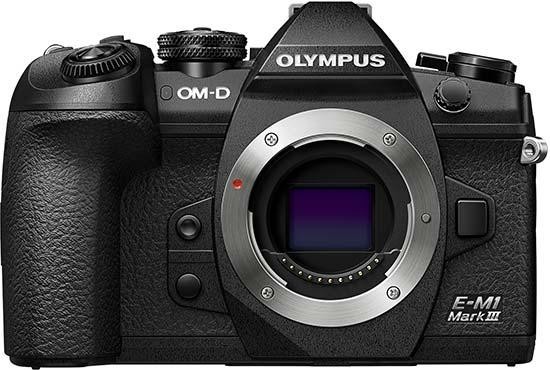 The Olympus OM-D E-M1 Mark III is a brand new professional model in Olympus' well-established mirrorless camera line-up, only sitting underneath the much more expensive, much larger flagship E-M1X.

The E-M1 Mark III looks an awfully lot like its 3-year-old predecessor, the Mark II, with most of the improvements being made to the inside of the camera rather than to the outside. The Olympus OM-D E-M1 Mark III weighs in at 504g body only and measures 134.1 x 90.9 x 68.9mm, a whole 4g heavier and exactly the same size. You can even use the same vertical grip on both models.

The E-M1 III sports a slightly bigger hand-grip, though, which makes it slightly easier to get a firm hold on the camera with three fingers whilst operating the shutter button with your right forefinger.

There's also a brand new ISO button on the rear and a multi-selector joystick that makes it much easier to quickly move the AF point using your right-hand thumb whilst holding the camera up to your eye.

The only other notable changes are the menu button being relocated over to the far-left of the viewfinder and a new Exposure Compensation on top in place of the previous Function2 button. Otherwise, the two cameras are nigh-on identical in terms of their control layout.

Just like the original E-M1, which was released way back in 2103, this new version also boasts a tough dust-, drip- and freeze-proof magnesium alloy body, which together with a similarly weatherproof lens fitted will withstand most things that you care to throw at it.

The OM-D E-M1 III is equipped with exactly the same 20-megapixel Four Thirds sensor as used by the Mark II, which will disappoint those looking for an increase in resolution. Given that the flagship E-M1X uses the same sensor too, and that Panasonic also employ a similar 20 megapixel sensor in their top-of-the-range Lumix-branded Micro Four Thirds cameras, it perhaps shouldn't come as a massive surprise though.

More disappointing is the E-M1 III's electronic viewfinder and vari-angle LCD screen combination, disappointing in the sense that they are also exactly the same as on the Mark II. We'd have really expected a significant bump in the specification of both key components, if only to match the flagship E-M1X, which offers the same resolution but better magnification (0.74x on the E-M1 III and 0.83x on the E-M1X). They're not particularly bad, just not as good as on some of the E-M1 III's main rivals, most notably the Lumix G9 which has a much better EVF.

The Olympus OM-D E-M1 Mark III's further improved 5-axis in-body image stabiliser works in tandem with the in-lens stabilisation system incorporated into certain lenses - such as the the M.Zuiko Digital ED 12-100mm F4.0 IS PRO and M.Zuiko Digital ED 300mm F4.0 IS PRO - to provide a claimed 7.5-stop advantage when shooting hand-held, surpassing any other camera that we've ever tested, including the previous Mark II model. The majority of Four Thirds lenses don't feature sync IS, but the E-M1 III still uses its in-body stabiliation to offer a whopping 7.0 stops of compensation, still surpassing most other cameras.

As its name suggests, this new mode should hopefully avoid errors that are commonly made when manually focusing on the night sky, with the E-M1 III using luminance information gathered by the sensor instead of relying on its phase detection or contrast AF systemsto achieve accurate focus. Using this mode, you can even dispense with a tripod altogether if you wish, with focusing sensitivity down to -3.5 EV.

Other auto-focusing improvements include the addition of 9-point and 25-point AF modes, and the ability to choose from all 121 points to setup your own custom AF layouts. Otherwise, the E-M1 III's dual phase- and contrast-based auto-focus system is exactly the same as used on the flagship E-M1X camera.

The Olympus OM-D E-M1 III can shoot 18 full-resolution frames per second with continuous autofocus when using the electronic shutter, the same as the E-M1 II, while the speed when using the mechanical shutter is also the same at 15fps. What has been improved is the shutter life, now doubled to 400,000 actuations from the previous model's 200,000.

Additionally, the camera has a Silent mode, in which it uses an electronic shutter capable of high-speed continuous shooting at up to 60fps, although the exposure and the focus are fixed at the first frame.

The OM-D E-M1 Mark III isn't really that different to its predecessor in terms of video performance. It can record cine-standard 4K videos at 24fps with a bit rate of up to 237Mbps in the DCI 4K mode (4096 x 2160 pixels) or UHD 4K footage at 30fps and a 102Mbps bit-rate. The camera can also record up to 120fps slow-motion video in Full HD 1080p and HD 720p recording is also supported.

It can use its excellent 5-axis sensor-shift image stabiliser which translates into surprisingly smooth hand-held footage, even when using a medium telephoto lens.

Manual exposure can be enabled for videos, although you do have to rotate the mode dial to the Movie position to take advantage of this. You can start filming in practically any other shooting mode too, but in that case, videos will always be recorded with auto exposure.

New to the E-M1 III is the inclusion of the flat OM-Log 400 profile for for more flexible colour grading in post-production and editing. It also has a dedicated 3.5mm mic jack on the body for better sound recording as well as a headphone jack for monitoring the audio.

The clever High Res Shot shooting mode has been further improved, with the E-M1 III now capable of shooting 50 megapixel images in the Handheld High-Res Shot mode, and 80 megapixels in the Tripod High Res Shot mode. The previous model always required a tripod to be used, which makes the Mark III a lot more versatile in this regard.

Another clever feature that can also be employed handhled is Live ND, which uses a similar method of merging multiple exposures together, but this time to capture images using a slower shutter speed in daylight.

Traditionally you'd need to fit a glass ND filter in front of the lens to achieve this effect, but now it's as simple as selecting the Live ND option and choosing from the 5 levels on offer, running from ND2 (1 step) to ND32 (5 steps).

It's not quite as powerful as fitting something like a Lee Big Stopper 10-step filter, but being able to achieve much longer exposures simply by choosing a menu option whilst hand-holding the camera and even previewing the effect in the viewfinder or LCD screen before capture is extremely liberating.

Note that it doesn't work with flash, though, so you'll still need a glass ND filter to overpower the sun when shooting outdoors.

The supersonic wave filter for dust reduction on the E-M1 III has apparently been upgraded with a brand new coating, making it more effective than the one on the E-M1X, although you'd be hard-pressed to notice any difference as Olympus' system has always worked really well.

The Olympus OM-D E-M1 Mark III continues to use the same BLH-1 battery as on the previous E-M1 II camera, so you can carry on using all of your old batteries if you upgrade. New to the E-M1 III is the ability to charge it on the go via the USB port and also power it using an external power bank, two features that we're seeing more and more of on recent cameras. It is compatible with the USB PD standard for a maximum power supply of 100W, which can fully charge the battery in two hours, although you can't charge and shoot simultaneously.

There is enough room for dual memory card slots on the E-M1 III, but disappointingly only the top one supports the faster UHS-II standard, which should help the camera keep up with all those high-speed bursts, while the bottom one supports the slower UHS-I standard.

The hand grip and indeed most of the front of the camera is covered in a leatherette-like textured material. Once again there are two buttons next to the lens mount. By default these controls are assigned to one-touch white balance and depth-of-field preview but, like almost everything else on the OM-D E-M1 Mark III, they can be reprogrammed to perform different tasks if you so desire.

On the top of the camera, to the left of the viewfinder housing (when viewed from above and behind) there is a cluster of controls comprised of two raised buttons and a power switch. Each of the two buttons provides access to two sets of settings.

Press the first one and you can adjust the camera’s drive modes and HDR settings with the rear and front control dials, respectively. Hit the second and you can cycle through the various focus and metering modes offered by the camera. The placement of the on/off switch might well raise a few eyebrows as it means you need to use your left hand to turn on the camera.

Moving over to the other side of the viewfinder hump, we find a traditional mode dial with a not-so-traditional locking pin in the middle. On the Olympus OM-D E-M1 Mark III, the mode dial locks with one press of the locking pin and unlocks with a second press, which is a clever idea.

The dial itself offers the usual P, A, S and M modes, plus a dedicated Movie mode and separate positions for 4 separate Custom modes for quick access of custom settings banks, or Mysets in Olympus parlance. The Art Filters and Intelligent Auto modes have disappeared altogether from the shooting mode dial.

The Olympus OM-D E-M1 Mark III inherits the still innovative 2x2 Dual Control system from its predecessors. This is comprised of two top-mounted control wheels and a function lever that’s pretty easy to reach with your right thumb.

The function lever has two settings. In the first position, moving the control dial on the front of the camera adjusts the aperture while the dial on the back adjusts the shutter speed. On the second setting, the dials change the ISO value and white balance respectively.

You can also configure the switch’s operation too – for example, you can turn it into a handy AF/MF toggle if that makes more sense to you. The remaining controls on the camera’s top plate include the already mentioned shutter release button, plus a dedicated Movie Record button and an Exposure Compensation button.

The rear of the camera is dominated by a large, vari-angle rear touchscreen whichcan be tilted to the side and rotated to the front for easier selfies. This LCD panel has exactly the same resolution, 1,037,000 dots, as its predecessor, and capacitive touchscreen technology.

The Info, Menu, Playback and Delete buttons have all been carried over from the original model, although they have been slightly rearranged. The Fn1 button which was previously on the upper right part of the rear plate has been replaced by the ISO button.There is still an AEL/AFL button encircled by the afore-mentioned function lever and a Display button located to the left of the viewfinder, with the relocated Menu button alongside it. And in addition to the new AF joystick, the old Menu button underneath the 4-way navigation pad is now the Info button.

The Olympus OM-D E-M1 Mark III makes do without a built-in pop-up flash, but once again comes bundled with the tiny FL-LM3 flash unit which clips into the external flash hotshoe. Naturally you can also use more powerful system flashes with the E-M1 Mark III – such as the powerful FL-900R, the FL-36R, the FL-600R or the FL-50R – but these are of course sold separately.