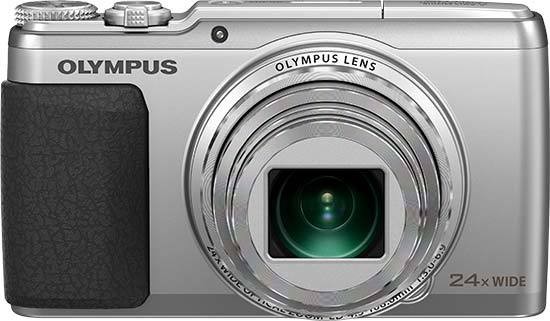 The Olympus Stylus SH-50 is a high performance digital compact camera that's packed full of tech. If the 24x optical zoom, FullHD video recording and touch screen shooting aren't enough, the SH-50 is the first of its kind to feature the 5-axis image stabilisation system, normally only seen in DSLRs. In this review, we'll put the stabiliser to the test and see if it's worth the asking price. Available in silver and black with a black leatherette grip or white with a brown grip, the Olympus SH-50 costs around £249 / $299.

Olympus had a resurgence of interest with the release of the digital PEN back in 2009 and have been enjoying the limelight for the past five years. They've expanded the PEN range, released the OM-D series and started to give their compacts a retro look.

The SH-50 continues this trend with it's vintage chic shape, faux leatherette grip and there's even a little bulge towards the bottom of the lens bezel to give the impression that the lens is removable. It's not, sadly, but the 24x optical zoom will cover pretty much everything you can throw at it. As well as a large focal range and a super fast start, the SH-50 sports Olympus' multi axis image stabilising technology.

This new technology comes from the Olympus DSLR and MicroFour Thirds system cameras. It works by moving the sensor in multiple directions to aid in stabilising the image. Their are five axis' but only three are used for still photography. It will use the whole five when shooting video, though. Interestingly, the two movements it doesn't use are the left, right, up and down movements. They're the standard settings for image stabilisation, so it will be interesting to see how the camera copes without them.

Another intriguing bit of tech wizardry that the Olympus SH-50 has fitted is the iHS system, It combines the performance of the CMOS sensor giving slightly lower noise along with the dedicated Truepic VI processor and according to Olympus will provide sharper images in the dark, work faster and also utilises the iAUTO mode which analyses the frame and selects the most appropriate scene mode for what you're shooting.

One of the things we like about long zoom cameras is that when you're at full telephoto, the camera will produce wonderful bokeh to make your subject stand out. That, of course, is as long as you're far away enough. With a great focal length, comes great focusing distances. However, Olympus have given the SH-50 a 40cm close focusing mode at full zoom. That's around 3x closer than a standard camera with this type of focal range. It means that wildlife – or in particular – insect photography will become easier to do and also more widely available as a genre to people who maybe aren't flexible enough to stoop down to the level of an ant. Should you wish to focus closer, the SH-50 doesn't have a macro mode per se, but does feature Super Macro scene mode. This will automatically move the optical zoom to the optimum range to get a 3cm close focusing distance.

Olympus aren't renowned for their easy to use menu systems, but with the Function menu, the SH-50 has a simple layout of various modes and shooting options all listed down the right side of the screen. Press left on the directional pad on the back of the camera and the menu opens up, spreading out over the screen. You can then scroll up or down to your desired position.

Should you require something from the Main menu, it can be accessed via the Function menu right at the bottom or by pressing the Menu button on the back of the camera. It's split into four sections and each page of those sections is listed down the left side in tabs. These can be accessed by pressing left, allowing you to scroll down them by page rather than by option. You can choose from Shooting, Video, Playback or Set-up. The menu is a black background with with font and a yellowy green highlight.

The Olympus SH-50 can start up from cold, focus and take a picture in 1.8sec which is very fast as you can give a couple of hundredths of a second either way due to reflexes. There are five continuous/burst modes on the Olympus Stylus SH-50. Sequential 1 and 2 will shoot continuously with Sequential 2 shooting faster than Sequential 1. We managed to get 25 shots on Sequential 1, but 17 on Sequential 2. However, the pictures in 1 were spread over the 10 second time frame we tested the camera over. The 17 images from Sequential 2 were shot in around 1.5sec. Hi1 and Hi1 and Hi2 are burst modes that will shoot in a much lower resolution setting in order to speed the process up (shooting and downloading, ready to shoot again). Hi1 shoots around 20fps (frames per second) and will shoot a 3sec burst at 3 megapixel. Push the setting on to Hi2 shoots at a much faster rate. The camera records at 60fps, again at 3 megapixel. The download times for all these is pretty good. The Hi1 and Hi2 were downloaded onto the card in 10sec, while the high resolution images were done in 20sec.

Pictures on the SH-50 can be played back by pressing the Playback button on the back of the camera. This can be done whether the camera is off or on, but if it's off, you need to hold down the button slightly longer for the camera to respond. When the image pops up, it will be full size in the window with no information about the shooting details on. This allows you to examine the picture to ensure it's right so you can reshoot if you have an issue. Press the Info button (up on the navigation pad) and you can choose a viewing version that shows a thumbnail of the image which can still be zoomed into for viewing convenience. But it also shows the full file info such as aperture and shutter speed, ISO and white-balance, resolution, compression and there's even a Histogram so those of you in the know can check the exposure is correct. Simply press down on the navigation pad to erase single images and if you press Menu, the Palyback section of the Main menu is prioritised. You can choose to create a slide-show, edit pictures such as resize, crop, add sound, adjust shadows, eradicate red-eye, rotate or fix the skin of portraits.

In the box you'll find a Basic Manual which looks bigger than it should for a Basic guide, but is in multiple languages. The enclosed CD sits on the top with the manual and it contains the full User Guide as well as a way of registering the camera online and Olympus Viewer 3 which is Olympus' editing suite. In the lower section with the camera, there's a charging unit, wriststrap, lithium ion battery and touch stylus (appropriate or ironic?).