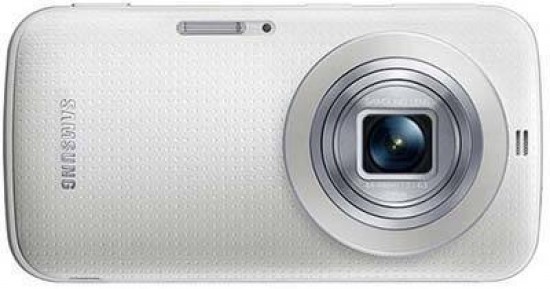 The Samsung Galaxy K Zoom is very much a device of two halves. From the front, it looks like just another compact camera, with a 10x zoom lens, handgrip and built-in flash. From the rear, it looks just like a Galaxy smartphone, with an almost identical screen and home button and the familiar Android OS appearing when you turn it on.

The Galaxy K Zoom boasts a 10x optical zoom with a focal range the 35mm equivalent of 24-240mm, supported by optical image stabilisation. There's also a 20.7-megapixel effective resolution from a standard sized 1/2.3-inch CMOS sensor, which is physically much larger than the sensor that you find in a standard smartphone and therefore promising better image quality. On the back is a 4.8-inch 720 x 1280 (HD) touchscreen Super AMOLED display, and the K zoom runs the Android 4.4.2 KitKat operating system.

The Samsung Galaxy K Zoom measures 137.5 x 70.8 x 20.2mm, which means that it can easily be stored inside a trouser pocket, and weighs a manageable 200g without battery and card. It's undoubtedly a large device that will definitely get you noticed, especially given the attractive white finish of our review sample and the large protruding zoom lens, so it's not quite as inconspicuous as a smartphone with a fixed lens. Having said that, the ability to zoom-in to 240mm using a relatively compact device means that you will be able to capture lots of moments that no other smartphone can reach.

With what feels like a higher proportion of plastic in the build than metal, the Galaxy K Zoom's sleek and stylish exterior certainly looks the part, even if it doesn't actually feel quite so premium. There isn't a proper handgrip on its faceplate, just a dimpled surface texture that helps a little when gripping the camera.

Other than the 10x lens, the only other features on the sparse front of the Galaxy K Zoom are a small porthole shaped window housing the AF assist lamp/self timer lamp and the Xenon flash unit, positioned to the left of the lens, and a pair of microphones to the right. If we've one gripe, the flash does seem to take an age to charge from cold before it can be fired. This wait might not be more than a few seconds, but it can take three squeezes of the shutter release before it will fire off a shot in flash mode.

Located on the top-plate is a thin power button. Hold this down for the first time and the Galaxy K Zoom springs into life, only taking around 2-3 seconds to extend the lens from within its body housing to maximum wideangle setting and switch the rear screen to camera mode - quite impressive for a mere smartphone.

A half-squeeze of the tactile shutter release button and a central highlighted AF point appears in green along with the customary confirmation 'bleep' that the user is free to go ahead and take the shot. Do so either by using the shutter release button or with a tap of the screen and in default single shot mode a full resolution, Super Fine (top) quality image is committed to either the built-in 8GB memory or an optional micro-SD card in one to two seconds, which is impressive. You can even take a picture using the power of your own voice, with "capture", "shoot", "smile" and "cheese" commands all available. Voice control can also be used to zoom the lens, fire the flash, set the timer options, and change the shooting mode, amongst other settings.

The Samsung Galaxy K Zoom's lens is zoomed in and out using a finger-operated zoom buttons (which are also the volume up/down buttons) or onscreen through the camera app. The lens mechanics take a couple of seconds to propel the user from maximum wideangle to extreme telephoto. While not the quickest response ever, this was still sufficiently responsive to enable us to quickly frame up the shot we saw in our mind's eye. When shooting video, the zoom takes more than twice as long to move through the same range, no doubt to minimize the already fairly quiet operational buzz.

The Samsung Galaxy has an array of beginner and more advanced shooting modes. The subject recognizing Auto setting is point and shoot all the way, the camera getting it mostly right, although - typically - busier scenes can confuse the auto-focus and the shutter will still fire even if the image is noticeably soft, so you can occasionally come away with blurred results. No matter, re-compose the shot and simply try again. The Smart setting is essentially a range different clever scene modes, including the useful Macro, HDR and Panorama modes. There are also creative filters available, useful for previewing and adding a not-too-cliched effect.

The other available shooting modes are the familiar Auto mode plus the unexpected bonus of Program and Manual modes. We did miss having dedicated Aperture-priority and Shutter-priority modes, as offered on the Galaxy Camera.

Pressing the Home button fires up the Galaxy K Zoom's default screen, which displays the time and date, allows you to perform a Google Search, includes icons for the Paper Artist, Instagram, Photo Wizard, Video Editor, Camera, and Gallery apps, plus Dropbox, Play Store and a further Apps icon which accesses all the default apps and the Widgets screen. Having the ability to connect to a wi-fi network or cellular data if using as SIM card, then edit your images and video with either the Samsung apps, Instagram or any one of hundreds of other Android apps, and then upload them to your favourite online network quickly becomes compulsive and makes the traditional process of downloading to a computer seem laborious and old-fashioned.

With the 4.8-inch screen swallowing up the entire backplate of the Samsung Galaxy K Zoom, there are very few other physical controls. There's a microSD card slot (up to 64Gb capacity), a tiny hoop for attaching a wriststrap, a headphone port, and the aforementioned zoom, shutter release and power on/off buttons. Note that there's no screw thread for a tripod, which is a shame. Note that the battery can't be removed, so charging is most definitely done in-camera.