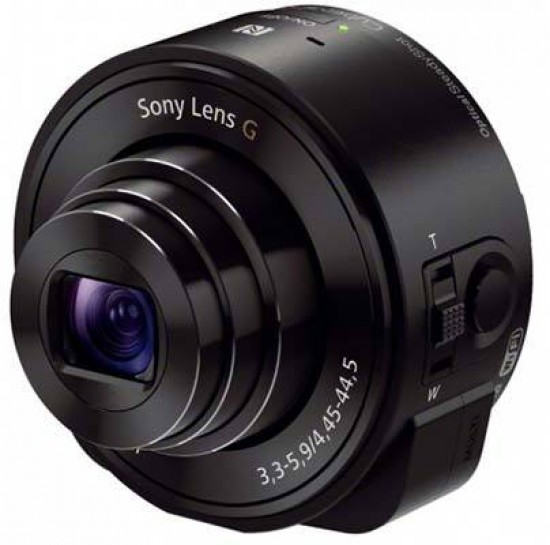 It's not often that we review something completely different to the norm, but the new Sony Cyber-shot DSC-QX10 definitely fits that description. The Sony QX10 is officially called a "lens-sensor module", and it's designed to be the perfect partner for your smartphone, rather than a standalone device. Essentially, the QX10 comprises an image sensor and a lens, but doesn't have a screen, instead relying on being paired to your smartphone via a wi-fi connection to compose and review images and change settings via Sony's PlayMemories Mobile app. Sony are hoping that frustrated smartphone owners will be tempted by the QX10's 10x zoom lens with Optical SteadyShot stabilisation and 18.2 megapixel image sensor, which are longer and bigger respectively than most smartphones offer, and by the compact size. The Sony Cyber-shot DSC-QX10 retails for around £179 / £250 and is available in white or black.

Looking closely at the specification, Sony have essentially taken their conventional DSC-WX200 point and shoot camera and completely changed the exterior design. Both products have the same optically stabilized 10x, 25-250mm f/3.3-5.9 lens and 18.2 megapixel Exmor R CMOS 1/2.3"-type image sensor. The Sony Cyber-shot DSC-QX10 is much smaller and lighter, though, only weighing around 100g, although obviously you also have to factor in the weight and bulk of your smartphone. You can actually autofocus and fire the shutter of the QX10 independently of a paired device - just don't expect to be able to see what you're doing!

The QX10 fits onto a smartphone via the supplied bayonet mount, which clips onto the back of the device and then turns and locks into place much like the lens on a DSLR or CSC. The bayonet has two plastic arms, one of which slides out to envelop and attach the QX10 to the smartphone - we've tried it out on a Sony Xperia Z and an iPhone 3Gs with no problems. The plastic arms have an internal rubber coating to prevent scratches. It's a fairly neat system that should cope with most smartphone shapes and sizes (Sony suggests a maximum width of 54-75mm and a thickness of 13mm).

With the Sony Cyber-shot DSC-QX10 fitted, your smartphone suddenly resembles a rather over-sized compact. We used it on the mean streets of London without generating too much interest from passers-by. On the front is a long telephoto zoom lens, although it doesn't extend too far when fully zoomed out. The glass is Sony G grade which is higher than standard Sony glass. It has been brought over from Konica Minolta when Sony acquired the photo imaging side of the company back in 2006. So what you have is a capable zoom lens with significantly better quality glass used in the construction.

The QX10 itself only has three main controls - an on/off button, zoom rocker switch, and a shutter button. There's also a tripod mount, which comes in handy if you want to use the QX10 remotely, and a tiny black and white display which shows the battery life and if a microSD memory card is inserted or not.

You don't actually have to use a memory card, as the Sony Cyber-shot DSC-QX10 can transfer full-size images directly onto your smartphone. We wouldn't recommend doing this, though, as it takes a long time to copy across an 18 megapixel image, and also you can't shoot video unless you fit a microSD card. Instead, you can either choose to just store the full-size images on the memory card, or more conveniently also send a 2Mb version to the smartphone, which is a good enough size for sharing on your favourite social network.

The QX10 uses a slim 3.6V NP-BN battery, allegedly good for 220 shots / 110 minutes video. As the QX10 has to be charged by connecting it to a computer or a portable power pack via the Multi interface port and the supplied USB cable, it's a good idea to invest in an additional battery if you want to use it for any longer than a couple of hours of shooting.

So you've charged the battery, optionally inserted a memory card, attached the bayonet mount and fitted the Sony Cyber-shot DSC-QX10 onto the rear of your smartphone - next you have to turn the QX10 on and then find the device's ad-hoc wi-fi connection on the smartphone. The first time that you do this, you also have to enter a password, which is supplied both in the user guide and on the inside of the battery cover (along with the SSID if required). If your smartphone is set to remember passwords, then you only have to do this the first time. You then need to download and install the free Sony PlayMemories Mobile app, if you haven't already done so. If your phone is NFC-enabled, you can simply tap the two devices together to do all of this, even including installing the app!

The Sony's PlayMemories Mobile app is used to control the DSC-QX10 - turn the QX10 on, open the app, and lo and behold a camera interface appears on the smartphone's screen. Rather annoyingly, though, this isn't as instantaneous as we've implied - it actually takes about 6 seconds for the connection to be made between the two devices, which is more than long enough to miss that decisive moment. You could choose to leave both devices on all the time, but doing so quickly drains the battery life of both.

There's also a slight time lag when viewing the DSC-QX10's display on the smartphone, which curiously gets worse the further you zoom through the 10x range and move the camera around. At full zoom it's bad enough to again cause you to miss the shot, especially if you're trying to track a moving subject. The final performance issue affects the zoom operation itself - there are two ways of zooming, either via the rocker switch on the side of the lens module, or via the soft buttons on the user interface. The latter method suffers from, yes, you've guessed it, a slight lag, which is frustrating rather than excruciating, but bad enough to make us use the physical switch for most shots. That in itself is a slight issue for right-handed users, as the switch is on the left side of the QX10, along with the shutter button. You can turn the QX10 upside down, but that disconcertingly flips the display too.

We've already mentioned that the QX10 is essentially a DSC-WX200 point and shoot camera in a different clothes - unfortunately this analogy doesn't extend to the camera interface and the settings, in that it's much more limited than on the WX200. The only options available on the live preview are the W/T zoom buttons, a large shutter button, Mode option for toggling between stills and video, and a shooting mode icon that lets you select from Intelligent Auto, Superior Auto and Program Auto.

As those three names suggest, the Sony Cyber-shot DSC-QX10 is very much a point and shoot affair - opening the Settings menu provides up to only 8 options, the most interesting of which are the Self-Timer and White Balance options. You can't set the ISO speed or exposure compensation manually, something that even the humblest compact camera can usually do, and there are no other photographer-friendly options (metering, focus, continuous shooting etc) - you really do have to completely trust the QX10 to deliver the shot. In direct comparison with the WX200, we also missed having a built-in flash, something that every smartphone owner would like, and also Sony's clever Sweep Panorama mode. Strangely, the ISO range changes depending on the shooting mode you're in, as does the macro capability (only available in Superior Auto, as is the effective Handheld Twilight mode).

When it comes to viewing the images that you've taken (if you've chosen to transfer them to the smartphone), this is done via the smartphone's interface, rather than through the PlayMemories Mobile app, as is sharing your images on social networks. Camera360 have recently announced that their software will be included on the QX10, but it wasn't installed on our test unit. Also, you can't currently take a photo directly from within a third-party app like Instagram, although Sony have released their API to encourage developers to do exactly this.

One benefit of the QX10's design is the ability to take a picture without having it attached to your smartphone. This is useful for everything from creative "selfies", to holding the QX10 above a crowd, or even for mounting it on a tripod via the included socket and capturing a subject remotely - the QX10 even has a flat bottom so you don't even have to use a tripod to keep it stable. The working range is dependent on the strength of the wi-fi signal, so just like using your laptop in the garden or the other side of the house, it largely depends on the distance and any obstructions (walls, for instance). It should be entirely feasible, though, to set the QX10 up on a tripod in one room and control it remotely from a different room - the possibilities are almost endless.

In the unusual circular box, you'll find the QX10, bayonet mount, dedicated lithium ion battery, USB cable and AC adaptor to charge the camera. You'll also get a Manual and CD software to view the pictures with and a wrist strap.

That concludes our tour of the design and performance of the Sony Cyber-shot DSC-QX10 - now let's take a closer look at its image quality...