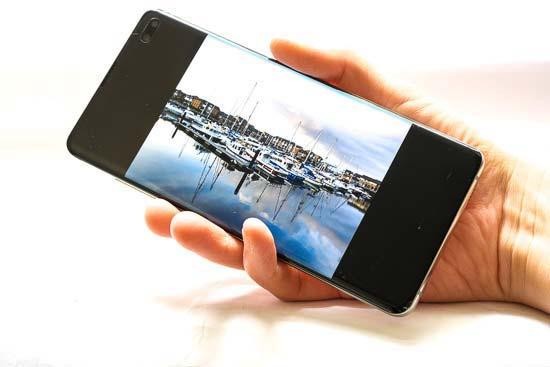 Both the standard lens and the telephoto lens feature Optical Image Stabilisation, while the standard lens also gives you the option to choose between two different apertures. This is the same setup, no matter whether you use the S10 or the S10 Plus.

On the front of the S10 Plus is a dual-lens selfie camera - the standard S10 uses a single camera only.

Other interesting specifications include a 6.4-inch display, a microSD card slot and a huge 4100mAh battery. It is available in a variety of colours, including Prism White, Ceramic Black, Flamingo Pink and Cardinal Red. There are three capacities available - 128GB, 512TB and 1TB.

At the time of writing, the Samsung Galaxy S10 Plus price starts at around £899 for the 128GB version to buy the phone outright, rising up to around £1,399 for the largest 1TB capacity. We were kindly loaned the Samsung S10 Plus by Vodafone, who offers the phone on a range of great-value contracts and deals.

At one point in time, it’s likely that the Samsung Galaxy S10 Plus would have been considered a very large phone, with it’s 6.4-inch screen, but by modern standards it’s probably about average. It certainly compares quite closely with the likes of the Huawei P30 Pro and the iPhone XS. If you prefer smaller phones, you might want to consider the standard S10, especially as it uses the same (rear) camera set up.

The design of the S10 Plus is very sleek, with very limited bezels and edge-to-edge display. Samsung’s solution to the “notch” for this phone is similar to what we’ve seen before with the Honor View 20, in that it uses a sort of “hole punch” design, which incorporates the front-facing cameras, leaving the vast majority of the device space to be taken up by the screen.

With the phone in a locked state, you can access the camera by swiping up from the bottom right hand corner of the screen. As we’ve seen with previous Samsung models, the S10 Plus has a very well-featured native camera app that appeals to those who like to go a bit deeper with their smartphone photography.

As standard, the native app opens in “Photo” mode. This is a simple mode that enables point and shoot photography. It has a Scene Optimiser that automatically recognises the subject and applies settings appropriately - but you can switch this off with a simple tap of an icon on the screen.

Along the bottom of the Samsung Galaxy S10 Plus's screen - or to the right if holding the phone in landscape orientation - you’ll see three tree icons, which you can tap to move between the three different camera lenses. There’s three trees for the super wide angle lens, two trees for the standard lens, and a single tree for the telephoto lens. Alternatively, you can pinch inwards or outwards on the main part of the screen to zoom in and out - if you want to extend further than 2x and engage the digital zoom, this is also how you access that.

At the top of the screen, you’ll see a cog for accessing some further settings, a flash icon for switching between flash on, flash off, or automatic flash, a timer icon (choose between 2, 5 and 10 seconds), an icon for choosing an aspect ratio (the choice is between 3:4, 9:16, 1:1 and “Full” - the latter of which means you can use the whole phone’s screen for your shot. Finally there’s an option for choosing between a variety of digital filters - here’s where you’ll find monochrome mode. You can also switch on a Beauty mode from this icon, too.

In the further settings menu, there’s a range of different options. One of the most interesting is the “flaw detection” which will display alerts if the camera detects that somebody in the shot has blinked, or if it detects blur.  You can also switch on “Shot suggestions” which will display guidelines to help you get a good shot in the first place.

In order to choose a specific autofocus point, you can tap around the screen to select the point you want. If you hold down on the screen, you’ll activate AF/AE lock, and you’ll also be able to adjust brightness by using a slider which appears when you select an AF point. Once you’re ready to take a picture, you can either tap the virtual button on the screen, or you can use the physical volume up or down key on the side of the phone.

Where you see “Photo” at the bottom of the screen, you can move left and right to choose different shooting modes.  To the left are all the “stills” modes, while to the right are all the “video” modes. The photo modes include Live Focus, Pro, Panorama, Night and Food mode. Live Focus allows you to create shallow depth of field effects - with it you can control the amount of blur, and even the type of blur with “spin”, “zoom” and “colour point” available as well as a more standard blur.

Pro mode is useful for many reasons. By selecting this, you’ll be able to control a number of different parameters, including white balance, ISO, focusing type, shutter speed, exposure compensation and unusually for a smartphone - aperture, when using the “standard” lens. You can choose between f/1.5 for darker conditions, or f/2.4 when more light is available. You’ll also be able to shoot in raw format - something which you can select from the main menu (under Save Options). Panorama does what it says on the tin, while Food mode creates shallow depth of field effects using Radial Blur.

Night mode is a new addition which came via a software update for the Samsung Galaxy S10 Plus. It works in a similar way to other night modes on the market, whereby it’s taking several images and merging them together. The latest version we were able to install on our device is 9.0.04.3, with further updates expected in the future - which may improve the night performance.

For video, you’ve got the standard Video mode - up to 4K is available, as well as Super Slow-Mo, Slow motion and Hyperlapse. Switching to the selfie camera, if you’re using the Samsung Galaxy S10 Plus, you’ll have the option to choose between the standard lens and a wider lens - which is great for getting more than one person in the shot. You also have a range of options here including choosing between different aspect ratios and switching a timer on.