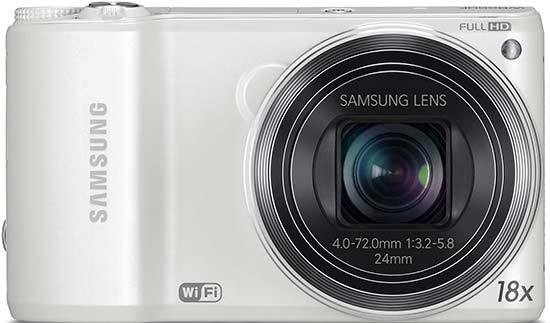 The Samsung WB250F is a chunky digital compact camera with an 18x optical zoom, 14 megapixel back-illuminated CMOS sensor, a suite of wi-fi options, Full HD movie recording and a hybrid touch-screen interface. On the surface it looks like a very capable camera. In this test, we'll put the Samsung WB250F through it's paces to see if it has the mettle to be owned by you. The Samsung WB250F retails for around £199 / $249.

Usually, Samsung think up a nice name for their products such as Jet or Galaxy. But the WB250F has nothing. Just the name WB250F. Quite a sterile approach to what looks like a nice little camera. The front design is not too dissimilar to a prosumer with its large lens bezel dominating the majority of the façade To the side is a handy grip for one handed shooting.

Staying at the grip, but examining the top plate, the Samsung WB250F camera features a small, round shutter release button with the zoom wrapped around it. Behind this is a command dial and a flash activation button is located to the side of that. A small secret panel is actually the hidden flash unit that pops up when the previously mentioned button is pressed. The power button takes pride of place in the centre of the top plate with the wi-fi direct link button secluding itself away from all others in the opposite corner.

The majority of real estate on the back of the Samsung WB250F is occupied by the touch-screen. The term “hybrid” has been applied because the camera uses a mixture of touch-screen and button operation.

The wi-fi Direct Link button on the top of the camera allows you to connect easier to apps and upload your photographs to the internet. The Samsung WB250F uses the wi-fi via your smart phone and first you have to download the Samsung Smart Camera app. It's free to download from the Google Play Store. Pressing the Direct Link button will start the application on the camera. The app then has to be initialised on the phone for the connection to take place. Selecting the camera from the list of devices on the phone will pair them. Once you're connected, as long as there's a wi-fi signal, the camera will automatically transfer them to your phone while the app is open.

There's an interesting feature for portraiture with the WB250F. It's called Best Face and will take a number of photographs of a scene. If you find that someone is blinking or looking the other way on your favourite shot (as is usually the case with group shots or young children), then Best Face will allow you to search through the pictures you've taken, select the best face from the shots, cut it out and paste it on the favourite photograph.

Cinegraphs have been making a rise in popularity recently. They're a mixture of a photograph and looping video, similar to a gif animation. However, the trick is to get someone or something that could loop. This is then cut out and used as video while the rest is frozen as a photograph. Done properly, it's a wonderful technique and it's great to see that Samsung are still including it on their cameras. It also incorporates the touch-screen of the camera. Once the video has been shot, you can erase the area you want to be moving. The motion animation will appear and you can refine it with different size brushes and hardness.

The Samsung WB250F' exterior is plastic, but the camera still feels solid enough. Aside from a metal lens barrel, there's no visible metal parts to the camera. Despite what seems like a cheap way of constructing a camera, a few additions suggest at least a level of quality. The battery door is metal backed for rigidity and also bears a locking switch to keep it in place. The USB port is also covered by a snapping lid instead of a rubber type.

We found the touch-screen to be hit and miss, although it could be something other than the screen. We found that moving from one process to another left a delay in between them where we simply had to wait for it to sort itself out. Arguably, the worst part of this is the zoom and focus lock system. Zooming in can take a couple of times twisting the ring on top of the camera before it finally starts to zoom. Once the focus has finally done its job, the focusing can sometimes take one or two attempts to get going. It can be convenient to leave the camera in macro mode if you're in a rush, but the WB250F doesn't have infinite macro focusing, so if the subject falls out of its range, it won't give you the green square.

There are many menus available on the Samsung WB250F. Actually, that's not entirely accurate. A reasonable amount of them are simply the same menu either streamlined or expanded depending on the mode you're in. The most expansive is when in program mode, so that's what we'll look at. Samsung are big on sharing your photos with this camera and so they've put the Autoshare feature at the top of the menu system. It's also on the main screen as a touch operation.

In this menu, you can also adjust the ISO, focus features, white-balance, resolution (interestingly placed way down the scale), metering and burst modes. There's no set-up menu in this area. If you want to change more in-depth features, such as the sound, display or connectivity options, you have to select the Settings on the command dial (the cog icon). The menus use a white, grey and blue colour scheme which is clean, attractive and easy to see. The options are clearly labelled with no jargon.

The WB250F has two settings for continuous shooting. Actually, the first is a burst mode because it will rattle off six pictures at full resolution in around half a second. The unusual part is that the slower setting also runs in a burst mode. We expected it to be continuous for at least ten seconds. But instead it takes six images over two seconds then stops to download. We do wonder why you'd ever need this with a faster option available. From start up, the camera takes just over 2.5sec to power up and take a picture. That's around average and we're not displeased with the camera's performance on that score.

Pressing the playback button on the back of the Samsung WB250F will allow you to review your pictures regardless of whether the camera is on or off. If it is off, simply hold the button down for a moment so that it knows that you haven't just caught it. The screen has two touch-screen buttons, one in each corner.

The grid icon will change the larger sized images into thumbnails so that they're easier to see en-masse. By doing this, you can then filter the pictures according to date or file type (JPEG, GIF, video etc). The way to get out of viewing the thumbnail grid isn't the way to reverse it. It's done by using the zoom switch on the front of the camera. An easy enough operation in itself, just removed from the rest of the actions, so it's more of an annoyance than anything.

The menu button on the screen or on the back of the camera access the same area. In this menu, you can still share images using the wi-fi technology. You can also delete pictures you don't want, start a slide-show to amaze your friends, protect images or copy them from the internal memory onto the card. There's also an interesting editing area. It allows you to crop, rotate and resize images. You can also add the smart filters if you like. That's actually very handy. It means you can have an original picture and one with an effect on it.

By normal camera box standards, the WB250F is relatively small. Good from an eco point of view, although we suspect it's been done that way to resemble a smart phone box and the smaller packaging is simply a happy accident. The camera sits on the top shelf which then folds out of the box to reveal the USB charger and software CD. Or at least that's what we'd normally put here. Except that the WB250F doesn't have a CD. It's a bold move by Samsung to assume everyone has an OS that will provide automatic drivers. Also, there's no full manual or editing software. The manual can be downloaded from the WB250F Support page of the Samsung website.