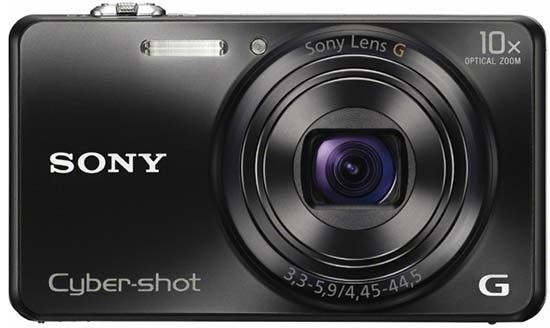 The Sony Cyber-shot DSC-WX200 is a slim, sexy digital compact camera featuring a large 10x optical zoom operating through a Sony G lens with enhanced Optical SteadyShot stabilisation. Couple that to an 18.2 megapixel Exmor R CMOS sensor, Full HD video, Wi-Fi connectivity and point and shoot simplicity, and it looks like an attractive camera. In this test, we find out whether the Sony Cyber-shot DSC-WX200 is worth the asking price. Available in silver and black the WX200 costs around £199.

On paper, the Sony Cyber-shot DSC-WX200 looks to be a camera designed for the happy snapper. Looking at the camera with its sharp edges and brushed steel front, it also seems to be geared towards the photographer that desires a camera that looks good too. On the front is a long telephoto zoom lens. The glass is Sony G grade which is higher than standard Sony glass. It has been brought over from Konica Minolta when Sony acquired the photo imaging side of the company back in 2006. So what you have is a capable zoom lens with significantly better quality glass used in the construction.

Simplicity appears to have been the forethought of the designers when creating the Sony Cyber-shot DSC-WX200. The top plate has only the power button and shutter release with zoom rocker combo. The back is similarly bereft of buttons compared to other digital compact cameras in this price range. A wheel has taken over the navigation pad usually found. The wheel can obviously be rotated, but it can also be pressed in at the four right angle points to move up, down, left and right through menus or to choose the modes that are indicated on the camera's casing. A switch is located above it to flick between normal shooting, panoramic shooting and video. Below the wheel, the Main menu button sits slightly above the delete/help guide button with playback slightly to the left.

A metal casing surrounds the interior while a shiny, glossy plastic covers the operational area of the back of the Sony Cyber-shot DSC-WX200. The battery door is slim and long which should make it flimsy and flexible, but Sony have added a length of metal on the underside to strengthen it. They've also added a small lock to prevent it snapping open. Unusually, the HDMI port is exposed to the elements and this sits on the bottom alongside the plastic tripod bush. For some reason, Sony have decided not to place the HDMI slot next to the USB port on the right shoulder. If they had it would then be covered.

Sony aren't known for their simple menu systems and the Cyber-shot DSC-WX200 is no different. They've tried to compact it all down to one area with sub-menus, but that can be more confusing. Press the menu button and you're taken straight into the Main menu. Here you can adjust the resolution, ISO or white-balance as well as play with the metering, focus, continuous shooting or smile shoot options. If you wish to go deeper and adjust features such as the date & time, language and such, you have to locate the toolbox icon at the bottom of the list and select it. The menu in here is far more comprehensive. There are five main tabs down the left side of the screen for Shooting, Main, Network, Memory and Clock settings.

The Sony Cyber-shot DSC-WX200 is wi-fi capable and the functions can be adjusted in the Main menu under Network settings. You can WPS Push to force locate a hot spot, access settings, edit the name or format all settings if you wish. More “on the spot” wi-fi functionality is done in the quick menu. Choosing where to transmit the images to is done in the Playback menu when you're looking at the pictures you've taken. One cool feature of the wi-fi is being able to link the camera to your smart phone. You can then use the phone as a remote so those outstretched arm 'selfies' will be a thing of the past.

Sony mention on the website for the WX200 that the camera shoots approximately 10fps (frames per second). While the camera certainly took 10 shots, it only managed eight of them in a second. The ninth was just over and the tenth frame was at 1.32sec. While it's only a quarter of a second difference, it could mean getting the shot or not. Generally if you're using a burst mode, it's to make sure you get a something fast and special.

Start up time is pretty quick, though. We managed to get the Sony Cyber-shot DSC-WX200 switched on, focused and taking a picture in just over 2sec. That's around half a second quicker than average, so if you're shooting the kids (with the camera, of course), you can at least rely on the camera starting up and being ready quickly.

Looking back at the pictures you've taken is performed by pressing the arrow button located in the bottom right corner of the camera. This can be done whether the camera is on or off. If you're only reviewing and not shooting at the time, it's best to leave the camera off, then the lens won't stick out, keeping it protected. You can alter the information about the picture available to read by pressing up on the wheel and choosing between basic info, no info and extensive info.

The latter shows not only the battery status, date & time, memory card number and resolution, but also the white-balance chosen, selected ISO, shutter speed, aperture, any exposure compensation, flash status and even a histogram. A histogram is a chart that illustrates the exposure of the camera. The left side shows the shadows, the centre is for mid-tones and the right side shows highlights. The more shadows are in the shot, the more the left will have peaks and so on. The ideal exposure will display a central peak – like a hill.  You can scroll through the pictures by rotating the wheel, although this isn't as precise and should be reserved for moving through a lot of pictures to find a rough point before using the left and right buttons of the wheel to move through with more finesse.

The Playback menu allows you to have a bit of fun with your pictures. There are several options for using the wi-fi feature including sending images to a smart phone (the resolution will be reduced to cope) or viewing them on a smart phone. You can view them on a television or a computer. There are also several editing options such as Beauty effect, Retouch and Picture effects. You can also create a slide-show if you wish. Other features include the ability to rotate, protect and place in print order. You can also access the In-Camera guide and the Set up menu.

In the box, you'll find the camera, dedicated lithium ion battery, USB cable and AC adaptor to charge the camera. You'll also get a Manual and CD software to view the pictures with.