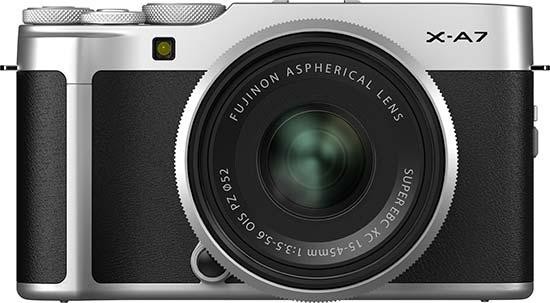 Following on from the almost three year old Fujifilm X-A5, the Fujifilm X-A7 is aimed at entry-level users who are keen to get into the Fujifilm system but perhaps don’t have the budget for some of their more expensive propositions.

As well as being an appealing model for stills photographers, it also includes a number of features which should see it appeal to vloggers. One of the key upgrades is that 4K video is now available in 30fps, rather than the much more limited 15fps of its predecessor. Vloggers will also be pleased to note the addition of a microphone socket for external audio recording.

Next on the upgrade list is the Fujifilm XA7's screen, which is not only larger than its predecessor (3.5-inches), but is also fully articulating so it can facer forwards for video recording and for some awkward angles.

Other interesting features include a single memory card slot, a max burst speed of 6fps, bluetooth and wi-fi connectivity and 425-point AF system.

As standard, the Fujifilm X-A7 comes packaged with a 15-45mm kit lens, which uses a motorised action to zoom in and out. The kit package is priced at £699 / $699 at the time of writing.

This being a Fujifilm camera, it has retro-styling, but as it’s one of the cheaper models available from the company, it doesn’t have quite the same high-quality feel as others in the line-up. The Fuji XA7 is also one of the smallest compact system cameras on the market - from Fujifilm or otherwise.

Despite the addition of the fully articulating screen, the weight of the X-A7 has dropped a little in comparison to the X-A5. Now weighing in at around 40g less than its predecessor.

To make it this small, there are some compromises to be made when it comes to button and dial layout. The majority of the back of the camera is made up of the screen, with much of the operation taking place via the touchscreen.

At the front of the Fujifilm XA7 there’s a fairly small grip, which isn’t overly pronounced but still helps you to get a firmer hold on the camera. You can use it one-handed if you wish, but you’ll probably find it’s most comfortable to use a second hand to steady the lens, especially if you’re using one of the longer optics.

On the top of the X-A7, the first thing you’re likely to notice is the lack of a viewfinder. That might be a deal-breaker for some, but if you’re used to shooting with a mobile phone or compact camera, you might not mind not having one. To the left of the top plate you’ll find the inbuilt pop-up flash, which can be unleashed from its housing via a switch on the side of the camera.

Also on the top plate is a mode dial. This is replete with a number of different shooting modes. There’s program, semi-automatic and manual modes, as well as a number of scene modes, which gives away that this is a camera which is intended for an entry-level audience. There’s also fully automatic modes which you can use if you just want to point and shoot.

In the middle of the two dials are buttons - the one nearest the front is the one you use to take a stills photograph, while the button in the middle of the rear dial will start video recording by default. You can change the functionality of this second button if you’d prefer it to control something else you use more frequently.

Flipping to the back of the Fuji XA7's screen and it’s a fairly minimalist affair in terms of buttons. Just above the screen is a drive/delete button, next to a playback button. On the right of the screen is a small thumbrest, with a joystick below which you can use to navigate through the various menus - as well as change the AF point if you wish. There’s also a menu/OK button, for accessing the extensive main menu, and another disp/back button.

Most of the rest of the Fujifilm X-A7’s operation, as already mentioned, comes via the very large touchscreen. To the right of the screen, you’ll see an arrow icon which you can tap to reveal a set of different options, including switching on the option to touch to release the shutter, change the film simulation mode and more.

You can also access the Quick menu by tapping a Q on the screen. In this quick menu you’ll find a host of commonly used settings, such as ISO, dynamic range, white balance, AF mode and more. You can navigate around this menu by using the physical joystick, or you can tap the option you want to change. Once you’ve selected the option you want to choose, you can use the scrolling dials on the top of the camera to make the adjustment you need.

The screen itself is fully articulated, meaning you can position it in a number of different angles. Video shotters/vloggers, as well as those with a penchant for selfies, will perhaps be particularly pleased to note that it can face all the way forward. You can also fold the screen in towards the body of the camera to protect it from scratches when transporting the camera.

As part of the kit package, the Fujifilm XA7 comes with a 15-45mm f/3.5-5.6 OIS lens. This lens retracts into itself when you switch the camera off to save space, with a ring around the centre of the lens which you can use to zoom in and out.

To release the lens from its mount, there’s a button just next to it, giving you the opportunity to use any of the optics from Fujifilm’s extensive range. Given the size of the camera, Fujifilm’s range of f/2 prime lenses make a lot of sense.

To the side of the camera is a small door which hides the HDMI port, as well as the USB-C charging port. The good news is that the battery can be charged in camera, saving you the need to take additional chargers while travelling and so on.

You can also give the Fujifilm X-A7 a power burst via a battery pack while on the move, too. On the other side of the camera, you’ll find a microphone socket, which will be good news for vloggers. There’s no headphone socket, though.

The battery itself is housed underneath a door at the bottom of the camera, which is where you’ll also find the memory card slot, which is a single SD card slot.