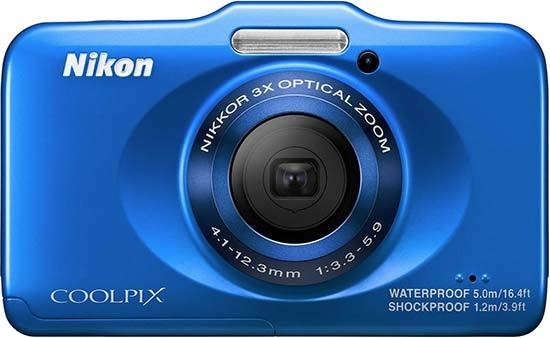 The target audience of the Nikon Coolpix S31 is an interesting one. It's aimed at an entire family; from child to grandparent, as opposed to just parents. There are a number of features that help it along to being a more universal camera. The designers have approached the camera with the aim of making it as simplistic as possible.  The button count is left to a minimum and are larger than  normal  to accommodate large hands and children's fingers.

On the top of the camera, the shutter release button sits on the right shoulder next to the power button. The only one that's not big or easy to get to. And that's a good idea, because it minimises the chance of shutting the camera down during picture taking time. On the left shoulder, the direct video record button is located. It's picked out easily by the red spot in it's centre. On the back, the running theme of simplicity is less of a “running” theme and more of a riot. There's only four buttons to action absolutely every menu option while shooting and they're located on the left side of the screen. They have a purpose being in the position they're in and we'll come to that in a moment. On the opposite side of the 2.7 inch screen is a  small navigation pad which doubles as a zoom button and below that is the playback.

Nikon have cleverly placed the buttons to the side of the screen so that they don't have to put any lettering on the buttons directly. This means less clutter to confuse the end user and it makes the camera look nicer. When you need to use a menu, the options will come up on the screen next to the button you have to press in order to use it. There's very little use of the navigation pad. Nikon have tried their best to keep to just using the buttons to the left. The only time you may have to use them is in the Main menu or the Setup menu. Otherwise it's used as the zoom button.

The reason behind many of the design ideas with the Nikon Coolpix S31 is down to its sturdiness. The camera is waterproof to 5m and shock-proof up to a distance of 1.2m. That's about waist height that it can get dropped from, which should cover the majority of people handling it. That will be great for everyday use as well as going on holiday. Young kids in a family will be able to record their adventures as they snorkel along or go rock-pooling and the bright colour will make it easy to see if it's dropped in a murky pool. The waterproofing also means that the camera is dust-proof.

Nikon seem to have opted for a smaller resolution on the S31. It's a mere 10 megapixels. However, let's not forget that less pixels generally means less noise. There may be a lack of fine detail compared to higher resolution cameras, but given the target audience, that's less likely to be an issue. It will do family portraits, beach scenes and interesting lizards, so that should be good enough.

For those of you wanting a bit more from your pictures, there's a number of filters to use. They're located in with the Scenes that can be chosen for specific types of photography, such as macro (flowers), sports and food. There's also the option to shoot interval photography, mirror effects, soft focus and diorama. The latter effect is when you shoot from a high viewpoint, looking down on a street and the effect makes it look like a toy town.

The Nikon Coolpix S31 isn't a camera that can be used in times of urgency. From a cold start, we took a picture in a little over three seconds. The average on compacts that we test is about 2.5 seconds. It's possible to turn off the welcome screen and that does shave off a lot of time. We managed to get it down to around 2.8 seconds. In the burst test, we managed to record eight images in a ten second period, giving an average of 0.8fps (frames per second). The first three frames run at about 1.5fps but then it slows down. Processing the pictures to the memory card is quite fast as the camera was ready to shoot again in three seconds.

The menu system has been arranged differently from other digital compact cameras in the Nikon range. Generally, once you've chosen the application you'd like to use, instead of pressing a general OK button somewhere, the instructions are all on-screen for confirming. You still use the same buttons. It's worth taking your time, because it will jump from button to button. While this can be annoying, if you used the same button to select something before confirming, if you made a mistake and didn't want to confirm, you'd have to start again which would be even more annoying. It's worth spending the little extra time to get it right.

Pictures taken on the Nikon Coolpix S31 can be reviewed with the camera switched on or off. Should you desire to use it while off, holding the playback button down for a few seconds will let the camera know it needs to start up and isn't just an accidental bump. The navigation pad is used to scroll through the images and there are four options to the left on the menu buttons. You can edit, make albums, add messages or tag as a favourite. You can also create a slide-show of your pictures if you want to. If you want to zoom in on the picture, you can do by using the normal zoom function. However, the S31 hasn't been programmed to be able to move around the picture. So, if you focus and recompose to get an off centre shot, you won't be able to check that it's sharp, which is baffling in this day and age.

In the box the User Manual is in a booklet. This is unusual for cameras these days. They generally put a brief start guide in a book and put the full manual on the CD. However, because the S31 is so simple, it doesn't need much to say about it and it can fit in a relatively slim booklet. The CD then has  just ViewNX 2 on it. This is Nikon's editing and tagging suite. The S31 takes a lithium ion battery which is included along with the charger and lead. A USB cable and wrist strap are also included in the box.