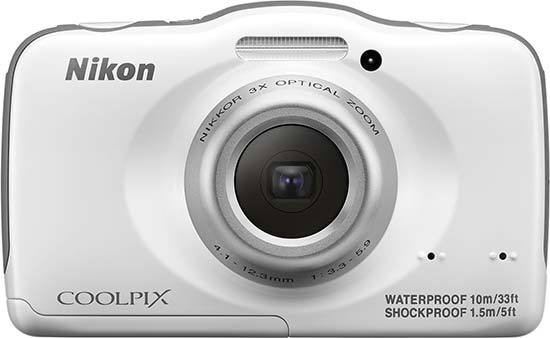 The Nikon Coolpix S32 continues the sleek, good looking waterproof cameras in the S range. Featuring a fully internal 3x optical zoom and 13 megapixel sensor, the S32 is also shockproof, waterproof and dustproof. It looks the perfect holiday point and shooter, but in the absence of an all-inclusive holiday to Spain, we'll have to settle with our home town to test the image quality. Priced at around £80 the Nikon Coolpix S32 is available in yellow, blue, pink and white.

The term “Easy-to-use” is bandied around quite a lot these days, but when you're faced with the Nikon Coolpix S32, it's like the phrase has been coined especially for it. In the past, waterproof camera were always made to look like they were waterproof. They would have unnecessary bulk to them for the depth they could go to, they'd have large rivets like on a ship and big buttons to see them underwater. That all changed with the Olympus Tough series, but now, Nikon are bringing the older styling back into fashion with these “S” series cameras.

The smooth body is reminiscent of a submarine with curves instead of edges. The lens bulges out quite a bit at the front to accommodate the internal zoom system. The flash, which seems slightly larger than other flash systems on cameras that are a similar size, sits on the top of the lens. The larger size may be to compensate for underwater use but the location could cause problems with red-eye.

On the top of the camera, the S32 sports the typical power button and shutter release button for taking pictures. These are substantially larger than usual which has multiple benefits of being suitable for a younger member of the family to use, being better for people with larger hands or if you have restrictive hand movements. The direct video record button has been placed on the top plate on the opposite shoulder to the shutter release. It's designated with a red spot which is the universal icon for video recording. A button of this size wouldn't fit on the back of the camera where they're typically found.

On the back of the Coolpix S32, Nikon have used inspiration from the DSLR range by placing operational buttons down the left side of the screen. These aren't to open large menu systems, like their big brother counterparts though. They open very simple menus that have a language that are completely jargon free. For example, if you want to adjust the resolution, instead of the menu saying “resolution”, it asks you to “choose a size”.

The zoom is operated via the navigation pad on the rear of the Nikon Coolpix S32. Arguably to save space on putting a switch or rocker somewhere and allow for larger buttons. The pad only has minimal use for the zoom and left and right to navigate through the pictures you've taken when in playback.

The S32 doesn't even have a menu button. The menu is in fact in plain sight as tabs down the screen when the camera is in use. If you leave the camera for a few seconds, they disappear.  They're colour-coded for ease of recognition with the green camera for shooting (not a menu, it over-rides scenes you've set and takes the camera back to Auto mode), the blue section is for flash and self-timer options, the pink tab goes into the Scene menu while the final orange tab accesses the camera Set-up menu. It's important to remember that the menu doesn't work the same way as other digital cameras. As we mentioned before, the navigation pad isn't used for getting around any menu systems, you have to use the left keys to do that. If you're used to using the pad, it can take some getting used to, but we fell into the practice easily enough.

The S32 is obviously a camera that's designed to take some knocks and be a lot more versatile for use with all the family. Throughout the years, tough cameras have become more advanced and that has increased the depth that they can go to and the height they can be dropped from. The S32 has a depth limit of 10 metres and a drop height of around 1.5m. That's more than enough for a simple scuba or snorkelling session when on holiday, while the shockproofing will easily cover up to waist height on an adult and any height on a clumsy child.

By default, the Nikon Coolpix S32 has a start-up picture when switching it on. This extends the start-up time considerably to around 5sec to turn the camera on, wait for the picture to go, focus and take a shot. The welcome screen can be turned off in the set up menu (orange tab), then going to Camera settings from there. This reduces the start-up time from 5sec to 2.5sec which is still slow by today' standards, but about right for the start up time of a camera around six months ago.

The camera has a burst mode which is found in the Scene menu. The camera takes a frame every 1/200th second to the dot for the first 2.2sec. Then it slows with the next shot taken just after 4sec and then just under 7sec and the final shot in our ten second test taken at just over 9.5sec.
Downloading all the pictures took up to the 50sec mark.

Playback can be accessed via the button at the bottom of the Nikon Coolpix S32 on the back with the blue arrow on it. The latest picture you shot will be brought up on the screen with the tab buttons on the left offering different options except the orange button at the bottom. Instead you have the top button which allows you to record some sound to the picture you've taken, play around with your pictures such as making albums or adding effects and you can also grade pictures with a crown or rosette. There's also an option to sort pictures by date or create a slide-show and you can also decide how to delete pictures if you're none too keen on them.

In recent times, Nikon have removed the CD that's normally enclosed which holds the full manual and a version of Nikon NX2, which is their editing and tagging software. These can now be downloaded form the Nikon website which means there's less CDs produced, which prevents waste.

What you do get in the camera box is a Quick Start guide in the top section. Below this is the camera, a lithium ion battery and associated charger. The charging unit comes in three sections. The USB cable will plug into a computer allowing you to charge from that. This will take longer, but means if you're travelling you can get some charge in it at an internet café or similar. The other two sections are for plugging into the mains. The main charging section has a European two-pin plug which can slot into the back of the third piece which has a UK three-pin plug on it. There's also a wrist strap and a cleaning brush for removing loose dirt and sand before opening the bottom of the camera.