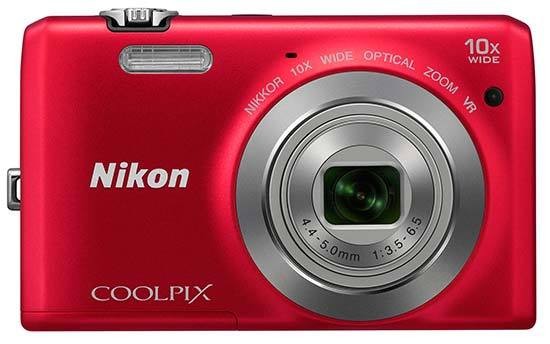 The Nikon Coolpix S6700 is a small digital compact camera aimed at the budget conscious. It features a 10x optical zoom for getting in on the action, a 20 megapixel CCD sensor for capturing as much detail as possible, and a 3 inch screen for reviewing your masterpiece after taking it. There's also a Retouch menu if you feel your pictures need a little pick me up. Priced at around £120, the Nikon Coolpix S6700 comes in a choice of red or black.

It's an interesting turn that the designers have taken with the Nikon Coolpix S6700. Looking at the front, you'd think they'd placed the lens incorrectly, as it sits towards the bottom of the face like a giant wheel on a watermill. Most of that is a silver bezel that doesn't affect the operability of the lens which is a 10x optical zoom.

Vibration Reduction (VR) has also been used in the lens system. VR is Nikon's image stabilising system. It uses a variety of features such as optical stabilisers and high ISO to allow the Nikon Coolpix S6700 to select a faster shutter speed which freezes the action. This in turn eliminates camera shake. Raising the ISO on the camera can reduce image quality as noise will enter the image the higher you go. You can reduce the need for this by steadying the camera on something before you take a shot, such as a wall, table or tripod. You can then select a lower ISO setting in the menu system to reduce noise and increase sharpness of the pictures.

On the top of the Nikon Coolpix S6700, there's only a small, sunken power button – which has a green ring around it to tell you when it's on – and the shutter release button with a large zoom ring wrapped round it. The larger zoom ring is generally a sign of cameras that are for the budget conscious as smaller rings cost more to fit so will be on more expensive cameras. However, there is an advantage if you have larger hands or limited movement, the larger zoom will be easier to operate.

Move onto the back of the Nikon Coolpix S6700 and the smaller buttons are used once again. They're arranged in a typical formation of four smaller control buttons around a navigation pad. Next to the thumb rest, there's a direct video record button meaning you can get those candid moments with motion.

The S6700 takes a lithium ion battery as its power source. The battery requires a dedicated charger which is included in the box alongside a UK three pin adapter and a USB cable. The latter also doubles as the charging lead which bridges the gap between camera and charging unit. This way of internal charging reduces the amount of equipment and accessories you have to carry. While we're looking in the box, there's also a wrist strap to attach it to you for safe keeping. In the top section of the box, you'll find a Quick Start Guide which looks very long but is in several languages which takes up most of the bulk. Interestingly, Nikon have provided a CD with ViewNX 2 on it. A CD is something we've started to get accustomed to be absent in the box with everything now available for download on the Nikon website. Notably, the full manual which is normally also on the CD is still missing and will require a visit to the Nikon website.

From a cold start, the S6700 will power up, focus and take a picture in around 2sec. That's slightly slower than the 1.5-1.8sec that we're now used to seeing on newer cameras. The Nikon Coolpix S6700 does have a continuous shooting mode in the Main menu. We managed to take seven images in a ten second period which gives an average of around 0.7fps (frames per second).

In order to take photographs in continuous shooting, you have to change the Nikon Coolpix S6700 into that mode in the Main menu. You can do this by pressing the Menu button on the back of the camera. The menu screen is split into three sections. The left section shows you whether you're in the Shooting menu, Video menu or Set-up menu. These sub menus essentially make it easier to navigate. By pressing left, you can flick through the tabs in order to move through the pages.

In the Shooting menu, you can make changes such as the resolution, ISO, white-balance and various focusing modes. There are lots of options to change unlike the Video section which has only four. They cover the resolution, focus mode, VR and wind noise reduction. The final Set-up tab is larger, similar to the Shooting tab. Here you can go more indepth with what you change, such as the time & date, sound settings, language and card format.  The section in the centre shows the various options available to you in each tab, while on the right is the current setting in that option. You can press right on the navigation pad, or the OK button to enter each menu.

The colour scheme is a two-tone light and dark grey with contrasting font (white on dark grey, black on light grey) and has a yellow highlighter to show where you are.

On top of the Main menu, there's also a Mode menu which is accessed by pressing the green camera button on the back of the camera. It brings up the modes to the right of the screen and you use the navigation pad to scroll up or down for the mode you wish to select. On some of the options you'll see a little right arrow and if you press right when you see this, it takes you into a separate menu to select a different mode to be brought up there. It's a way of making the camera a little more user friendly.

Once you've taken some photographs, you may wish to see them on the back of the Nikon Coolpix S6700. It's most certainly best to wait until you get back to the computer before you start judging them properly as the resolution of the screen is nowhere near that of the picture so you'll not see a lot of information that will be present on a larger screen.

Just like pressing the green camera brings up a Mode button, pressing the blue arrow also brings up a Playback Mode menu. In this you have four options and they offer alternatives for sorting through your pictures for easier viewing.

In the main Playback menu, there's only two options for Playback and the aforementioned Set-up menu. Here you can perform some basic editing such as D-Lighting, red-eye correction, Quick or Glamour retouching. There's also options to create a slide-show, rotate the picture, copy the picture or add a voice memo.