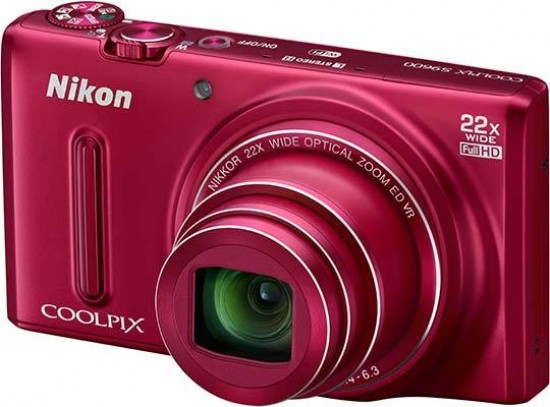 The Nikon Coolpix S9600 is the top of the range digital compact camera before moving into the Performance range. Features include a 22x optical zoom, 16 megapixel back-illuminated CMOS sensor, built-in WiFi and Full HD video. It looks impressive on the outside, but can it meet those expectations on the inside? This full test will reveal all. The Nikon Coolpix S9600 costs around £250 and is available in white, red and black.

When we receive a new digital camera in for review which is an upgrade from a previous model, we hope that it has certain extra features on it that will make newcomers to photography, or indeed the brand, excited enough to want to learn more. That is what photography is all about after all. The Nikon Coolpix S9600 is an upgrade of the previous S9500 that we reviewed in August 2013 which received a Recommended award from us. There are some interesting features that have been adjusted slightly such as the lower 16 megapixel back-illuminated CMOS sensor. That's a drop of 2 megapixels, which isn't such a bad thing. The lower pixel count simply means that noise will be less of an issue.

The size of the lens means that the body bulges slightly at the front to accommodate it. Because of the extra length of range, the camera needs a larger flash to ensure as much spread as possible and this means that the S9600 has retained the pop-up type that has been seen on previous models. It's automatically activated by choosing the flash function on the pad at the back. Once finished, you do have to push it down manually, though.

Joining the flash on top of the Nikon Coolpix S9600'sbody, you'll find a small power button indented into the top plate in order to avoid accidental pushing while trying to take a picture. A small green light surrounds it for easier location. The tiny holes at the front are the left and right microphones for stereo sound video which is also FullHD quality.

The shutter release is quite large and the zoom ring has been shrunken to fit into a small cavity in order to keep the aesthetic of the design. A Command dial is situated next to it on the shoulder which replaces the Mode menu seen on models lower in the Coolpix range.  The Command dial allows you to flick through most used modes quicker than going into a menu system. It also displays the turning of the wheel on the screen, so you can see from there. It's also a larger display for anyone struggling to see the small dial. You can choose the typical modes of Auto, Scene selector (intelligent auto), Scene modes and Digital effects, but there's also some scenes that you may use frequently and these are also available such as Back-lit portrait, Night portrait, Night scene and Smart portrait. Aside from the Auto mode, most of those options will close down the menu system and only allow you to adjust the resolution.

The back of the Nikon Coolpix S9600 has taken the typical design of four buttons surrounding a navigation pad and used that. However, because of the inclusion of the aforementioned Command dial, one of the buttons has been removed. It would normally access a small menu system for choosing those modes and would be redundant on the S9600. It also would toggle between Playback and the Shooting screen. On the S9600, you simply tap the shutter release button as though focusing.

The navigation pad has optional menus for self timer, flash and exposure compensation. There's also a macro facility if you press down. The circle of the pad is in fact a wheel and you can use this to quickly scroll through the larger menus. An interesting point here is the exposure compensation which isn't just that. Pressing the button brings up three picture options for Hue, Vividness, Brightness (exposure compensation) and a Reset and Exit option.

From a cold start up, we managed to get the Nikon Coolpix S9600 powered up, focused and taking a picture in 1.6sec. That's a fantastic performance and in our opinion it's mainly down to the super fast focusing system on the S9600. There are several continuous shooting modes on the S9600. The ContinuousH setting takes five pictures in just under half a second before it has to stop and download the images. These are full size images and as such take a while to download. However, it does average at 10fps (frames per second) which is impressive. If you're not in as much of a rush or you need more pictures taken continuously, you can select the Low option. We managed to get 19 pictures in just under 8sec before the buffer got full up and had to stop to download. During this mode, the camera can grab between two and three images in each second. The downside is that it takes anything up to a minute to complete downloading the pictures before it's ready to shoot again.

The menu system is laid out like a typical Nikon digital compact with the tabs down the left side. Dual tone grey colouring and yellow highlighter allows easy viewing. There's an additional menu on the S9600 which accommodates the WiFi integration options. The Main menu is bright, intuitive and easy to use. It's split into three sections with the primary tabs down the left side, the options within each tab in the middle and the sub-options to the right.

Flicking to the playback section will bring the most recently taken picture up onto the screen. It shows some basic shooting information such as date & time, file number and it's position in the pictures you've taken as well as the resolution and battery life remaining. After a few seconds that will go. You can press the Ok button to go into Quick effects which will add a filter over the picture you're taken. It's the same as the Digital effects so you don't have to worry if you missed using a filter. The camera will also save it as a separate file, so it's arguably better doing it this way.

The Playback menu replaces the Shooting tab with the Playback tab. It allows you to retouch images automatically, add D-Lighting, correct red-eye and other mild editing features. There's also provision for creating a slide-show, protecting and rotating your pictures as well as making copies, adding voice to them and placing them in print order.

In the box alongside the Nikon Coolpix S9600, you'll find a lithium ion battery with a USB cable, charging adapter with a two pin plug and a three pin adapter for UK use. The camera charges via the USB port and will charge off a computer which is extremely useful. There's also a wrist strap to keep the camera safe and a Quick Start guide to get you up and shooting as soon as possible. You may notice the lack of a CD with the full manual. This can now be downloaded from the Nikon website if needed.