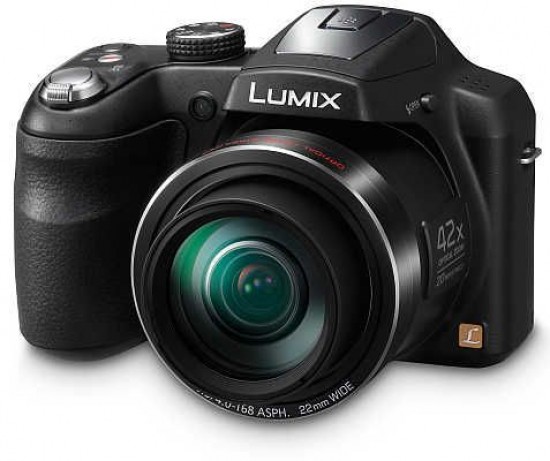 The Panasonic Lumix DMC-LZ40 is an entry-level bridge camera from Panasonic. It features a 42x optical zoom, with a focal length starting at a wide angle of 22mm, rising up to 924mm at the telephoto end. There’s also an 84x digital zoom available, too. A 20.0 million pixel 1/2.3-type CCD sensor is found inside the camera, while other specifications include 15 different filter effects, the ability to create panoramic images, and a 3-inch LCD screen. In terms of the rest of the market, the camera is relatively basic, with no inbuilt Wi-Fi, no touch sensitive screen and only 720p video recording. However, for the moment at least, it’s one of the cheapest bridge cameras on the market. It competes with cameras such as the Canon SX410IS (40x optical zoom) and the Nikon L840 (38x optical zoom). The Panasonic Lumix DMC-LZ40 costs around $250 / £150.

Unlike some of the other entry-level bridge cameras on the market, the Panasonic Lumix DMC-LZ40 is quite a large offering, being reminiscent of one of the lower cost DSLRs on the market. The grip is pretty hefty, and has a textured coating to help your hand feel more secure when holding it. There’s also an indent on the grip so your fingers sit comfortably. The back of the camera has a thumb rest, which is also textured and adds to the secure feeling in your hand.

On the top of the Panasonic Lumix DMC-LZ40 is the shutter release button, which is conveniently placed for your index finger to reach from the grip. Around this is the switch for extending and retracting the 42x optical zoom. It’s quite a small switch, but it seems solidly built enough and the zoom itself retracts relatively quickly.

Also on the top is a dedicated movie record button, and a mode dial for switching between the different exposure modes the camera offers. Compared to some cameras there’s a relatively limited range of shooting options on offer here. There’s automatic, scene, digital filter and panoramic modes, and also a manual mode and Program mode. There’s no aperture priority or shutter priority mode as you often find on many bridge cameras. The inbuilt flash on top of the Panasonic Lumix DMC-LZ40 is raised by pressing a button on the side to release the catch which forces it to pop up. To retract the flash, you simply push it back into place.

Moving to the back of the camera and there’s a very familiar layout as we’re pretty much used to seeing on digital cameras of this kind. There’s a four way navigational pad, with each key controlling a specific function of its own. The up button controls exposure compensation, the left controls timer / drive mode, the down button accesses focusing mode, while the right button accesses flash modes. The central button is used to access the camera’s main menu.

There’s also a quick menu, which is accessed by the trash can button when in shooting mode. Here you’ll find a range of different commonly used settings, depending on the shooting mode you’re in. For instance, if you’re shooting in Program mode, you’ll find settings such as sensitivity, white balance and drive mode. Meanwhile, in iA (automatic) mode, you’ll only find image size, burst shooting and movie quality.

A button labelled “Exposure” on the back of the camera is used to alter exposure compensation when shooting in Program mode, or to start altering aperture and shutter speed when shooting in Manual mode. Once you press the button in Manual mode, you can use the left and right keys to choose aperture, or the up and down keys to set shutter speed. It’s worth noting that the camera only gives you two options for aperture, which will depend on the focal length you’re shooting at. For instance, if you’re shooting at the lens’ widest point, you’ll be able to choose between f/3.0 and f/8.6, while at the telephoto end of the lens, your choices will be f/16.5 and f/18.9. It’s not the most flexible of systems, especially as the slowest shutter speed you can select is 15 seconds.

When shooting in iA mode, the Panasonic Lumix DMC-LZ40 will decide everything for you, including activating macro mode and selecting a focus point. When shooting in Program or Manual mode, you can use a central focus point and use the focus and recompose method. Again, it would be nice to have a bit more flexibility here - such as the ability to choose a different focus point.

The main menu is organised into three different sections; Record, Motion Picture and Setup. In the first section you’ll find the ability to change settings which are pertinent to how the image looks, such as metering, white balance and so on, while in the Setup section you’ll be able to change the date and time, turn off the camera beep and so on. The Motion Picture section doesn’t have many options, but you do have the option to change video record quality and choose a different focusing method. The menu is sensibly arranged for the most part and it’s relatively straightforward trying to find the setting you require.

In good light, focusing speeds are fairly quick. There are occasions when the Panasonic Lumix DMC-LZ40 fails to lock onto the target, and presents a false positive (where the camera suggests it has acquired focus when it hasn’t). This seems to be especially true for small subjects taken from a distance (using the optical zoom lens). When the light levels drop, the lens tends to hunt around for a bit longer.

Shot to shot times are also a little slow, and the Panasonic Lumix DMC-LZ40 can be a little unresponsive when you press a menu or quick menu button, taking a little bit of time to respond to commands on occasion. On a couple of occasions during this test, the camera froze up completely, requiring that the battery be removed and the camera restarted to get it working again.