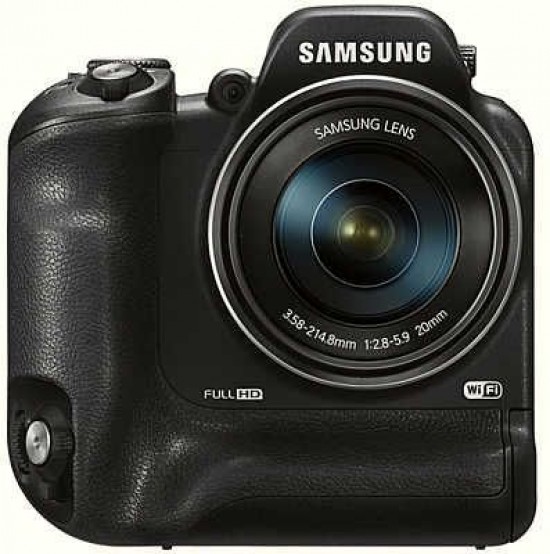 You’d be forgiven for assuming that a camera as big as the WB2200F would be hiding an equally large sensor. But whilst Samsung has given it a 16.4-megapixel, back-side illuminated device capable of an ISO100-6400 sensitivity range, its 1/2.3” size is no bigger than the sensor in a typical ultra-compact camera.

Consequently the WB2200F doesn’t resolve any more detail than a camera a fraction of the bulk. It still puts in a good performance at ISO400 and below though, and whilst detail is slightly smeared at ISO800, it’s nothing major. ISO1600 shows considerably more smearing though and a slight green colour cast starts to affect images. It’s more of the same at ISO3200 and here colour speckling is also becoming an issue. The topmost ISO6400 sensitivity is underexposed with very high levels of image noise and is therefore best avoided.

Despite its massive zoom range, the 60x lens produces minimal distortion and maintains good corner sharpness. Chromatic aberration (purple fringing) makes an appearance in high contrast areas and whilst it’s not particularly severe, it is noticeable when viewing at roughly 50% image size or larger.

Generally the WB2200F’s exposure metering produces accurate exposures with good highlight and shadow detail. Images taken in cloudy conditions can look slightly underexposed though and would often benefit from up to 1-stop of positive exposure compensation.

The WB2200F has seven sensitivity settings available at full resolution, ranging between ISO100 and ISO6400.

The camera’s 60x optical zoom lens gives you a focal range of 20-1200mm (in 35mm-camera terms). As impressive as the huge telephoto range is, the 20mm wide angle ability shouldn’t be overlooked as it’s wider than almost any rival camera.

Three JPEG compression options can be selected: Super Fine, Fine and Normal. These result in file sizes around 6MB, 4.5MB and 3MB respectively.

The Samsung WB2200F handled chromatic aberrations only fairly well during the review, with some obvious purple fringing mainly present around the edges of objects in high-contrast situations, as shown in the examples below.

The WB2200F boasts a Super Macro mode that lets it focus down to 1cm from your subject. You’ll need to keep the zoom set to maximum wide angle to achieve this, and plenty of light is necessary to compensate for the inevitable shadow cast by the camera.

In our testing with the WB2200F successfully avoided red-eye and the flash produced only minor wide-angle vignetting from a distance of 1.5m.

Samsung’s Optical Image Stabilisation (OIS) system does a great job at ironing out the effects of camera shake. It’s vital for maintaining sharp shots at the kind of extreme telephoto focal lengths that the WB2200F is capable of.

The WB2200F will automatically capture panoramic shots by pressing and holding the shutter release whilst sweeping right, left, up or down. Unlike many cameras which force you to keep panning for at least 120 degrees, the WB2200F will let you stop the pan wherever you like. But whatever the width, the end result will only be around 950 vertical pixels in size.