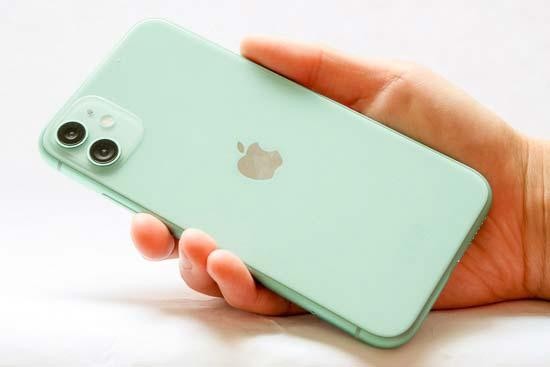 The other main different specification which is likely to be pertinent to photographers include a different screen size and type, but otherwise, the native camera app is exactly the same – including new features such as Night mode, an improved Portrait mode, additional shooting features and a newly-streamlined appearance.

At the time of writing, the iPhone 11 retails for between £729 and £879 depending on the memory size (64GB, 128GB, 256GB are available) you choose – bearing in mind that you can’t expand the onboard storage with iPhone models, if you’re a photographer who likes to shoot a lot of images and videos, investing in the largest possible memory size might be a sensible idea.

Apple pitches the iPhone 11 as being for those with a more limited budget, but it also targets a younger and more “fun” orientated audience. As such, the iPhone 11 is available in a variety of different brighter colours, as compared to the more staid options available for the iPhone 11 Pro.

If you place the iPhone 11 Pro and the iPhone 11 side-by-side, you’ll be able to spot a difference, but used in isolation the iPhone 11’s screen is a very good display for your images.

To launch the iPhone 11’s camera app, you can hold down the camera icon from the bottom right hand corner of the lock screen. If the phone is locked, you won’t be able to look at any images you’ve shot in previous sessions, but otherwise using it is the same as if you’d unlocked it.

If you’ve ever used an iPhone before – perhaps if you’re upgrading from an older model – then you’re likely to be very familiar with how the native camera app operates.

Although Apple has made some tweaks in order to streamline it, it still works in pretty much the same way. Unlike many different Android smartphones, Apple’s native app is very simple – this is good news for those who want simplicity, but it’s a little frustrating for advanced or enthusiast photographers.

The app will launch in “Photo” mode by default. If you want to use a different shooting mode you can swipe left for video, slo-mo and timelapse modes, or you can swipe right for portrait and panoramic modes.

In the photo mode you can simply tap around the screen to choose a focus point and a metering point, or you can just point and shoot and let the phone guess for you - most of the time it gets it right.

Live Photos are essentially still images with a small video clip attached to it. If you send a Live Photo to another iOS or MacOS device, they’ll be able to see the attached video, but it’ll just look like a normal stills shot when shared with other kinds of devices.

You can also use Live Photo to make edits after the fact - including choosing a slightly different moment, or creating a long exposure effect.

The iPhone 11 has two lenses - in order to switch between them, tap a circle marked with “1x” on the screen. The screen will appear to zoom out and the circle will now display “0.5x” to indicate the ultra-wide-angle lens is being used. You can also pinch to zoom on the screen to activate digital zoom, which is available up to 5x.

A new and extremely useful feature of the iPhone 11 is the ability to see what’s happening outside of the frame of the standard 1x lens. The iPhone 11 uses information from the ultra-wide-angle lens to display - on screen - anything that is happening on the periphery of the frame. This can help you line up shots just at the perfect moment, or it can help you decide you want to shoot wider in the first place.

As well as being helpful as a compositional tool, you can also set - via the iPhone’s main settings - the phone to record simultaneously from the main and ultra-wide lens. You can then use this additional information in the inbuilt editor to correct problems such as wonky horizons, or even distortion.

In order to activate this function you have to shoot in the more efficient - but less compatible - “HEIF” (High Efficiency Image Format) - file type, while the extra image will be deleted if you don’t use it within 30 days of shooting the original.

By swiping up on the screen, you’ll reveal some of the additional camera settings which have been hidden away by the new streamlined app. You’ll find further flash settings, further Live Photo settings, the ability to choose a different aspect ratio (the native is 4:3, but you can also choose 1:1 - square - or a new 16:9 ratio), a self-timer and access to some digital filters.

A lot of has been said about the iPhone 11’s new Night Mode, but it’s not technically a selectable mode. Instead, it will automatically activate when the iPhone 11 detects that there’s not enough light in the scene. You’ll know when it’s been activated as you’ll see an icon which looks a little bit like a moon appear at the top of the screen.

If you would like to take a bit of control over the night mode, you can find further settings for it in the hidden section, giving you the option to reduce the number of seconds it shoots for, or just turn it off altogether.

One of the advantages the iPhone 11 offers over its predecessor, the iPhone XR, is that Portrait mode is now available for subjects other than humans. It utilises the wide angle and the ultra-wide-angle lens to create shallow depth of field effects, with a range of “lighting” options also available. The phone’s artificial intelligence has been better trained to recognise certain subjects, such as pets - which will likely be a big draw for many.

The iPhone 11 can shoot 4K video, but you’ll need to head to the main settings of the iPhone to switch between different resolutions and frame rates. It’s a little annoying not to have it within the native app itself, but unless you’re often switching between resolutions, it’s not likely to be a huge problem. By default, it’s probably worth leaving it on Full HD for most situations.

Another setting found in the main settings menu is the Smart HDR setting. By default, this will be set to on. If you’re finding it going a bit overboard, you can elect to switch it off. Once you do that, you’ll see there’s an option to switch HDR on or off from the camera app.