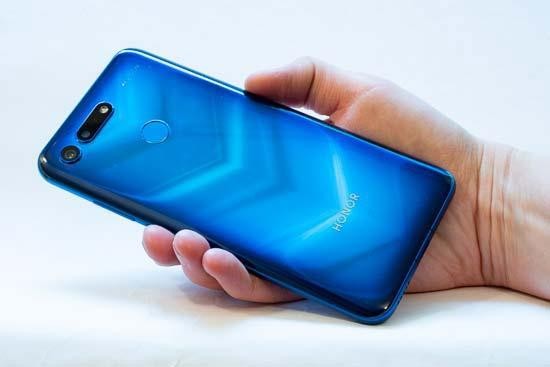 The newest flagship smartphone from the Huawei sub-brand, Honor, is the View 20. It was previewed at CES at the beginning of January 2019, with the full specifications announced in Paris on the 22nd January.

There are several key headline features of the Honor View 20 which are appealing to photographers, including some which are world firsts, or unique to the smartphone in the market. The first is the 48 megapixel sensor – the highest resolution available for a smartphone in the world. Joining the main rear camera is a front-facing 25 megapixel camera, which is housed behind a small hole in the screen. Called a “hole punch” by some people, it removes the need for a standard “notch”, which some people don’t like.

Using a 1/2-inch Sony IMX586 sensor, other specifications of the camera include a 48 megapixel AI Ultra Clarity mode which makes use of the Kirin 980 processor. A second rear camera is found on the device, but it is a “TOF 3D Camera” which can be used for various functions such as 3D motion-controlled gaming and so on.

The Honor View 20 smartphone is available in four different colours, as well as two different RAM/ROM options (6GB RAM & 128GB ROM or 8GB RAM & 256GB ROM). It can bought for either £499 or £579 depending on which option you go for, making it considerably cheaper than some of the other flagship smartphones on the market.

The Honor View 20 may be in the “mid-range” on the smartphone spectrum, but it has quite a premium look to it. The rear of the phone has a special effect, which creates a chevron pattern when the light catches it and is very attractive. For the purposes of this review, we have been using a ‘Phantom Blue’ model, which also features the higher specification of RAM/ROM.

With the screen switched on, the most striking thing about the Honor View 20, is the lack of a notch, while also making use of (almost) the entire screen. Over the past few years, notches have become pretty much ubiquitous, being a way to house the front-facing camera, but not everybody is a fan.

You can open the native camera app directly from the lock screen, by swiping up from the bottom right hand corner of the screen. If you’ve ever used a Huawei or Honor phone before, you’ll be very familiar with what is presented here. It is a flexible camera app, giving you lots of different options depending on how you want to shoot.

By default, it opens in the standard Photo mode, which is an automatic mode that you can use for the majority of your pictures. In this mode you don’t get too many options, but there are a few settings that can be changed from the icons along the top of the screen. One of the most interesting is the ability to switch on and off “AI” (artificial intelligence) – you might wish to do that if the AI is going a little over the top in certain situations. Other options found here include switching on moving picture, switching on flash and accessing further settings (hidden behind a cog icon).

The additional settings include options such as adding a watermark, turning off sounds and so on. However, most useful is the ability to change image resolution, and switch on the 48 megapixel Ultra Clarity mode. This mode works by taking a series of images in quick succession, merging the best detail from each to create a single 48 megapixel image. As standard, resolution is set at 12 megapixels – which is a good option for most situations. You can also shoot at 48 megapixels, without the Ultra Clarity option, which is useful for subjects which might move between shots.

Along the bottom of the main shooting screen, you’ll find a set of additional modes. To the left of the Photo mode, there’s Portrait, Night and AR Lens mode, while to the right of Photo mode, is Video. If you tap on the “More” option, you’ll see a host of additional options, including Time-Lapse, Aperture, Light Painting, Filter, and perhaps of most interest to enthusiasts, “Pro” mode.

Night mode is something we’ve seen before on the likes of the Huawei P20 Pro and the Huawei Mate 20 Pro. It works in exactly the same way on the Honor View 20, essentially, taking a set of short exposures and then blending them together in camera to give the effect of a much longer exposure. It’s called Night mode, but it can be useful in any situation where light is low, such as indoors.

Portrait mode is again something we’ve seen on other Huawei phones, as well as from other manufacturers. It imitates the use of a DSLR by creating a shallow depth of field effect. The portrait mode found on the Honor View 20 is very similar to that found on the Mate 20 Pro, in that it has the option to adjust “lighting” mode, as well as the option to create different background “bokeh” effects. You can choose to have out of focus areas rendered in different shapes, including hearts, circles and diamonds. For some reason, the “swirl” effect as seen on the Mate 20 Pro is not found here.

The best way to create shallow depth of field effects when not shooting a human subject is to switch to Aperture mode, found under the “More” tab. With this, you can adjust the aperture effect – and you can even adjust it afterwards in playback, as well as choosing an alternative focus point.

Pro mode is something which can be accessed directly from the main camera screen with phones like the P20 Pro and the Mate 20 Pro, but it’s a bit more hidden away – perhaps an indicator of the type of audience the View 20 is aimed towards. Never-the-less, having the option to use it is great should you need it.