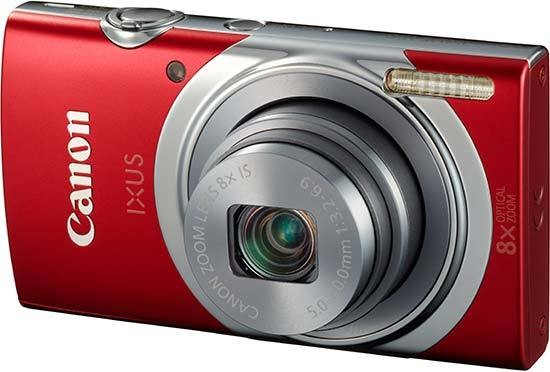 The Canon IXUS 150 (also known as the PowerShot ELPH 140 IS) is a stylish, svelte digital compact camera that boasts a 16 megapixel sensor, 8x optical zoom, image stabiliser, 2.7-inch LCD screen, 720p movies and Digic 4 processor. Built for the point and shooter thanks to it's impeccable ease of use, the IXUS 150 costs around £95 / $130 and is available in red and silver.

It could be argued that the Canon IXUS 150 looks better in red than it does in silver. Of course that's a personal choice that you would have to make, but the red unit we tested is a stunning shade. The silver lens is surrounded by a chrome ring that provides an attractive focal point of the camera. The chrome on the front blends with the strip that wraps around the circumference of the entire camera and in a way it looks a little space age.

Thanks to the camera being from the IXUS range, things such as the zoom ring and the tripod bush are a better quality than a Powershot of the same price. A two-tone colour scheme has been used on the camera. The front features a satin red paint finish while the back is glossy. The back formation of buttons is similar to the rest of the current range with a staggered formation to allow them to be slightly larger for easier operation. It also makes them easier to see for those users with problematic eyesight. They sit next to the 2.7 inch TFT LCD screen which has a resolution of 230,000 dots (76,666 pixels).

The main, and indeed only, difference between the IXUS 150 and it's smaller brother, the IXUS 145, is the addition of an image stabiliser. Named the Intelligent stabiliser, it uses eight various modes to ensure a camera-shake free image. Some of these modes will include increasing the aperture size to allow more light to pass through, a lens based optical shift system and increasing the ISO. It's worth noting that while you will get sharp images, the actual quality of them may drop due to some of the modes in use.

There are two menus on the IXUS 150 and a few sub-menus within. The Function menu is accessed via the centre button on the back of the camera. It allows you to make adjustments to the basic functionality of the camera, such as the mode it's in, the ISO, resolution, white-balance or exposure compensation. That's if you're in Live mode and have selected Program. If not, the sub-menu for the modes will alter what you can access in the rest of the menu. Pressing up on the navigation pad when out of the menu will flick between Intelligent auto and Live modes. There's no Mode menu for choosing landscape or portrait, things like that. Those are found hidden away in the Function menu when in Live mode. P is Program which gives all the aforementioned features and you can scroll down if you wish to use a mode more suited to the scene that faces you, such as portraits, low light or night time.

Tap the menu button on the back of the Canon IXUS 150 and you enter the Main menu. This is more indepth than the Function menu and makes changes that will last or change the way the camera acts. You can select where the camera focuses, whether it's one-shot focusing or continuous. In fact there's a lot of options for focusing the camera. The Main menu is split into two sections and the camera tab is for shooting options. The spanner and hammer icon is the menu for things such as the date & time, volume, LCD brightness or formatting the card. It's heavier stuff that will change the camera until you put it back or select something else.

Start up time from the off position is fast at just under 1.5 sec. That's fast and it's good to see lower end cameras benefiting from new technology. After all, it wasn't that long ago that cameras had a start up and shoot time of around 2-2.5sec. Shaving the extra time off means candid pictures have an increased likelihood of being captured. Continuous shooting is a plodding affair and runs at around 0.8fps (frames per second). That means there's no burst of photographs to capture fast moving objects, but it also means that you don't have huge wait times between download and being ready to shoot again.

You can review pictures you've already taken on the Canon IXUS 150 by simply pressing the button with the blue arrow. This takes you into the Playback area and the photograph that you took last will be displayed first. You can do this regardless of whether the camera is switched on or off. Generally you need to hold the button down for a couple of seconds for the camera to power up the playback when it's in the off position, but not with the IXUS 150. You can tap the button and it will bring your latest picture onto the screen for you to review.

With that picture, you'll see some basic shooting information. You can tap the DISP button to scroll through viewing options such as no information, basic information – the default setting – and lots of information. With the latter setting, the review image becomes a thumbnail with all the shooting information surrounding it such as shutter speed, ISO, resolution, file number and white-balance setting.
The Playback menu has three tabs, although the third one is the Set-up tab from the Main menu that we saw before. The Playback tab is designated an arrow – the universal icon for playback ever since VHS. You can perform basic adjustments to your photos here such as erase, protect and rotate them. You can also adjust i-Contrast and correct red-eye.

Canon have simplified the accessories that are in the boxes of their digital compact cameras. With the camera you get a lithium ion battery, charger & cable and wrist strap. There's also a Quick Start guide wrapped up with a European warranty and some promotional material. Most noticeable is the lack of CD. The CD that would normally hold the full Manual and some basic editing software is now gone and those items have to be downloaded from the Canon website. It's a move that Canon aren't alone in, a few other manufacturers are doing the same thing to save resources.