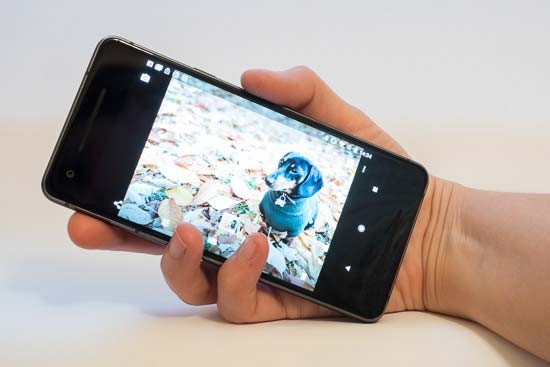 The Google Pixel 2 follows on from the popular Google Pixel phone, with some key improvements to the onboard camera.

It now features a camera with dual-pixel autofocus. There’s 12.2 megapixels, with an accompanying lens which has an f/1.8 aperture. Unlike many of the other high-end phones currently on the market, the Pixel 2 uses a single camera setup, and not two.

On the front of the phone is a 8 megapixel front-facing camera for selfies, which has a lens with an f/2.4 aperture.

Available in two sizes, the Pixel 2 and the Pixel 2 XL share the same camera specifications, so the images should be the same from either device. For the purposes of this review, we will mainly be looking at the smaller Pixel 2 device, which has a 127mm / 5 inch 16:9 Full HD AMOLED screen. We've also been tesing the larger Pixel 2 XL version too, which has a larger 152 mm / 6 inch display.

Other interesting specifications from a photography point of view include the ability to record video in 4K (front camera only), optical and electronic image stabilisation, and a “Portrait” mode (which creates a shallow depth of field effect). It is also waterproof and dustproof, charges via USB-C, and comes with either 64GB or 128GB inbuilt storage - interestingly however, customers get unlimited cloud storage for photos (until 2020).

EE is the lead partner of Wembley Stadium, working to make Wembley the most connected stadium in the world.

We have mainly been using the standard Google Pixel 2 for the purposes of this review, which is 145.7 x 69.7mm x 7.8mm, and weighs just 143g. It is light, slim and has a very simple design. While it may not have the “pizazz” of some of the other devices on the market, with a slightly utilitarian design, some will probably like the simple approach.

From the lock screen, you can open the camera by swiping up from the bottom right hand corner. If you’ve already got the screen unlocked, simply tap the camera app to open it.

Considering that the Pixel 2 is so squarely focused on the camera aspect, it’s a little disappointing to find such a simple native app, without a pro mode available for those that want to take a little extra control. Still, if you’re somebody who is just interested in taking good pictures, the simple app is probably quite appealing.

Along the bottom of the screen (or to the right if holding it in landscape format) is the on-screen shutter button. You can also use the physical volume button on the side of the camera to take a shot, which is particularly helpful when taking selfies. You’ll also see the option to switch to video recording, which you can get to by swiping right on the screen too.

Holding down either the volume button, or the virtual shutter button, gives you access to “Superburst” shooting. This means you can take a burst of shots, then choose the best in playback.

If you access the Google Pixel 2's camera from the lock screen, you’ll only be able to see photos you’ve taken in the current unlock session by tapping on the icon in the bottom right hand corner of the screen. Otherwise, you’ll need to unlock to see all of your photos. The Pixel 2 uses “Google Photos” to playback your photos, which is included on your phone and means your photos are automatically synced to the cloud - you can access your Google Photos on your computer whenever you like. You can choose to keep the photos on your device, or, if you want to free up space on your device, you can delete them easily, with a notification on the phone instructing you how to do so. If you need the photos again on your device, you can simply download them from the cloud. You get unlimited high resolution storage until 2020, after which, photos will be shrunk down - and you’ll only have 15GB worth of space. It’s therefore worth downloading high resolution files and keeping them somewhere safe periodically.

To go back to the camera app, as mentioned, it’s very simple. Along the top of the screen (or to the left in landscape orientation), you’ll see the ability to switch on a grid - helpful for composition -  change white balance (oddly, the only manual control available here), and switch the flash on or off. You can add or remove brightness when you tap around the screen to set the autofocus point - a slider will appear that you can move up and down to adjust the brightness of your shot.

Timer mode gives you an option to delay shutter release by 3 seconds or 10 seconds. There’s also the option to set the “Motion” controls. This is how you create a photo with a couple of seconds of video attached - you can set it to record motion all the time, none of the time, or for the Pixel 2 to automatically decide when you want it on - this is a great way to create motion clips when it’s most likely to be wanted (i.e. of a moving person, animal etc, rather than a still landscape).

Tapping the icon which appears as three lines gives you access to the different shooting modes available with the Pixel 2. You’ve got Slow Motion, Panorama, Photo Sphere and Portrait. From here, you can also access the “Settings” menu. In the Settings menu, you’ll find options such as “Save Location”, as well as being able to set the gesture you use for various actions, such as double-tapping the screen to use the digital zoom.

By default, the camera app isn’t set to the highest resolution, but you can change that here in the settings menu. You’ll also be given the option to use the 16:9 ratio if you prefer, rather than 4:3. There’s no option for either 3:2 or 1:1, which is a shame for composing, especially for the square format.  You’ll also be able to set the video resolution, again, by default, the highest available (4K) is not selected - but you can set it if you wish. For 4K video recording, only 30fps is available, but for both Full HD and 720p, you can shoot in a variety of frame rates, up to 240fps. If you want to alter frame rate, you’ll need to do that from the main camera window - simply by tapping the choice you want at the top of the screen.

Under the “advanced” section of the Settings menu, you’ll see there’s an option to set “HDR+ control”. If you select this option, you’ll be able to switch HDR on or off from the main camera, but if you leave the option unselected, all photos will automatically be taken with the HDR setting switched on.

Portrait Mode is a very interesting setting which allows you to create shallow depth of field effects.  When you select it, you’ll be asked to tap on an area to focus. Ostensibly, this has been designed to take pictures of people (hence the name), so the idea is to tap on the subject’s face. However, you can also use it to create shallow depth of field effects with other subjects, such as still life and pets.

A quirk here is that sometimes, the camera seems to decide that it shouldn’t be doing a shallow depth of field effect, so when you go to look at the image, a normal image will display, rather than one with a blurred background. Most of the time however, if you head to the playback area, you’ll see that you have two versions of the image - one with a blurred background, and one without. The latter is useful if the blur has gone a little bit wrong but you still want to salvage the image. Unlike with the Huawei Mate 10 Pro, you can’t alter the focus point after you’ve taken the shot. It’s worth noting that the Pixel 2 does this entirely with Artificial Intelligence, as there is only one lens to work with.

The Google Pixel 2 uses dual pixel autofocusing, which is very quick and rapid. Generally, it locks onto the correct target with ease, and even performs impressively in low light.