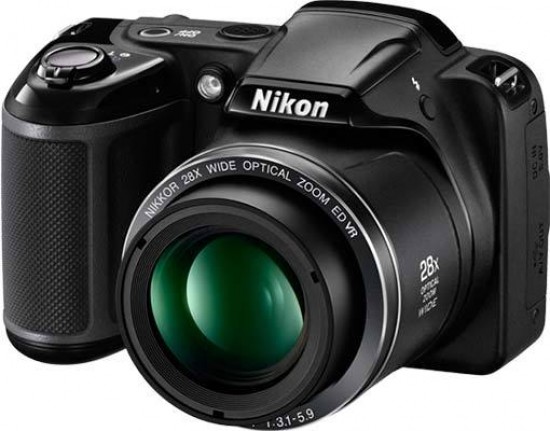 The Nikon Coolpix L340 is a new bridge camera which features a 28x optical zoom, which gives you an equivalent of 22.5-630mm in 35mm terms. There’s also a 56x Dynamic Fine Zoom available, which is a type of digital zoom. Inside the L340 is a 20.4 million pixel CCD sensor. Other specifications include 720p video recording, High Performance VR (Vibration Reduction), a variety of automatic and scene shooting modes and a three-inch 460k-dot LCD screen. The Nikon Coolpix L340 uses AA batteries, with a quoted battery life of 370 shots when using alkaline batteries, or 960 shots when using lithium batteries. In terms of pricing, the L340 compares relatively closely with the Canon PowerShot SX410 HS, although the latter has a longer focal length range, at 40x. The Nikon Coolpix L340 costs around £125 / $149.

The Nikon Coolpix L340 is a middling-size bridge camera. Something like the Canon PowerShot SX410 HS is smaller, but then others still, such as the Canon SX60, or Nikon’s own P610 are much bigger.

Following a classic simple bridge camera design, the L340 has a pretty pronounced grip which is textured for extra purchase - the dots on the textured surface make it feel pretty secure in the hand. On the back of the camera is a small thumb rest which also helps to make the camera sit snugly in your hand. The rest of the camera doesn’t have any kind of special coating on the chassis.

As quite a basic model, there aren’t too many buttons or dials to get acquainted with on this camera. On the top of the Nikon Coolpix L340 you’ll find the on/off switch, the shutter release button and the camera’s microphone (for use when recording video). Around the shutter release there’s a zoom switch marked T(zoom) and W (wide). Using the switch feels quite fluid and the lens will stop extending just for a split second before entering into the Dynamic Fine Zoom - the zoom display on screen will also change colour, allowing you to keep an eye on which type of zoom you’re using.

Also on top of the Nikon Coolpix L340 is the flash. A button just to the side of the flash needs to be pushed to release the pop-up flash. You need to push it back into place to switch off the flash. Moving to the back of the camera, just near the thumb rest is a dedicated video record button. It’s found in a sort of recession into the camera, so it’d be pretty difficult to accidentally knock the record button on and make erroneous videos.

A button marked with “Scene” can be pressed to choose between the different shooting modes the Nikon Coolpix L340 offers. There aren’t a huge amount to choose between, but you have Scene Auto Selector - where the camera will choose the most appropriate scene settings for you - Scene selection, where you can choose between options such as Portrait, Landscape, Sports and so on for yourself - Digital Filters - such as Cyanotype, High Contrast Monochrome and so on - Smart Portrait and Auto Mode.

The last of these modes, called “Auto”, gives you a small amount of control over some shooting settings when you enter the main menu, such as White Balance, ISO Sensitivity and AF Area Mode. You can’t alter things such as aperture, shutter speed, autofocus point, and so on, and you can only shoot in JPEG (there’s no raw format shooting).

Other buttons on the back of the Nikon Coolpix L340 are a playback button for looking through your shot images, a Menu button for accessing the main menu and a delete button. There’s also a four way navigational pad, with an OK button in the centre. The directional keys can be used when you’re navigating through menus, with confirmation selected using the OK button. Each of the directional keys also has an assigned function to it as well. The left key accesses self-timer, the up button is used for flash modes (when the flash is raised), the right button allows you to alter exposure compensation, while the down key accesses macro focusing (if you’re in Auto mode only). If you can’t make a change, for instance if the flash is not raised, then a button will do nothing when you press it.

The main menu is fairly sensibly arranged, with the amount of options changing depending on what shooting mode you’re in. You’ll find the most when in Auto mode. It’s also split into three different sections, for still images, video and for general settings such as setting the date and time, sound settings and so on.

When viewing images in playback, the menu will give you some options which include creating a slide show, rotating your image and so on. You can also apply a digital filters to shots you’ve already taken. Some of the options here are not available in the digital filter shooting mode, such as Cross Process, so it’s worth exploring this option if you’re particularly keen to add a creative look to your images.

You’ll find the memory card and battery compartment on the underside of the Nikon Coolpix L340. If you’re mounting the camera to a tripod, you won’t be able to access the memory card, which can be a little annoying. The camera takes AA batteries - some people love these, others hate them. On the positive side, it means that should it run out, finding replacements in shops across the world is usually pretty easy. On the other hand, you’ll either need to be spending out on new sets of batteries every time they run out, or invest in some rechargeable AA batteries which are more expensive to begin with.

There’s no viewfinder for the Nikon Coolpix L340, so instead you’ll need to rely solely on the screen. Although it doesn’t offer a particularly high resolution (at 460k dots), it’s pretty bright and clear. If the sun is particularly strong you may struggle to see it, but it probably would have increased the price of the whole camera to have a tilting or articulating screen. The same goes for making it a touch sensitive device.

Shot-to-shot times for the Nikon Coolpix L340 are a little slow, even when using a Class 10 SD memory card. You can also be left hanging around for a couple of seconds while the camera catches up if you want to make any changes to settings, such as choosing a different filter. The camera will display an annoying “Please wait for the camera to finish recording” message if you try to change it too quickly for the camera.

Focusing also has its frustrations. In good light, and for mid to distant subjects, it’s reasonably quick, but as soon as the light drops, it takes much longer to focus. If you’re shooting in Scene Auto Selector, it can struggle with identifying a macro subject and will refuse to focus for the first few attempts, usually getting it by the time you’ve half pressed the shutter three or four times.