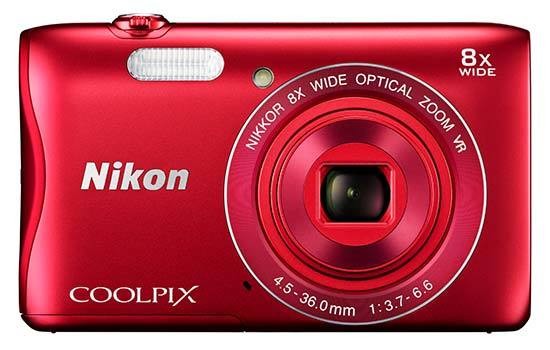 The Coolpix S3700 replaces the S3600 as the Nikon’s lower-midrange entry in its Coolpix Style range. The two cameras share almost identical specs, so the S3700 retains the same 20.1MP CCD sensor and 8x optical zoom lens which includes lens-shift Vibration Reduction. HD 720p video recording and semi-automatic panorama capture are also carried over, as are Glamour Retouch post-processing options to help you take more flattering shots of friends and family. The only new feature to appear on the S3700 is built-in Wi-Fi with NFC pairing, letting you remotely control the camera and wirelessly transfer images to your smartphone or tablet. The S3700 is available in red, black, silver, pink, blue and blue line-art colour options for £99/$140.

Externally the Coolpix S3700 resembles both its predecessor, the S3600, and its equally new sibling, the S2900. Dimensions of 95.9 x 58.0 x 20.1mm and smoothed-off corners make the camera very easy to slip into a tight jeans pocket, whilst a 118g ready-to-shoot weight makes it 7g lighter than the already trim S3600.

Build quality is as you’d expect at this price point. The body is entirely plastic, but it’s reassuringly solid and doesn’t flex. The tripod mount is also plastic, but that’s no big deal since a camera such as this is unlikely to spend much time tied down.

Things are more of a mixed bag when it comes to ergonomics though. The buttons are all well sized and can be pressed without resorting to a thumbnail, and there’s a useful thumb grip between the screen and video record button. However, Nikon hasn’t interrupted the clean design lines on the front by adding a ridge for your fingers to hang on to, so the only gripping point here is the slightly embossed Nikon badge. Factor the silky matt plastic texture and the S3700 is therefore worryingly easy to drop, especially when wearing gloves.

Another ergonomic bugbear is the 2.7” LCD screen. Its 230,000-dot resolution is the minimum you’ll find on a compact camera these days, and it translates to a fairly pixelated viewing experience which won’t show off your shots or even the camera’s menus. But worse than this are the restricted viewing angles. Take a high-angle shot and the screen image turns black, or go for a low-angle composition and the display washes out almost completely. It’s fair to say that this is a common issue with cameras in this price range that’s caused by low-tech LCD monitor technology, but it’s still frustrating and makes it tricky to assess brightness and contrast even when shooting from normal angles.

Thankfully the S3700’s headline built-in Wi-Fi feature is more appealing. You’ll need to download the Nikon Wireless Mobile Utility app (available for Android and Apple) for your mobile device to make the system work. Then just press the dedicated connection button on the camera, located alongside the shutter release, and the S3700 immediately becomes a Wi-Fi hotspot. If your smartphone or tablet is NFC-enabled, you can complete the connection by simply tapping it against the S3700, or otherwise you’ll need to connect manually be selecting the S3700’s wireless hotspot in your device’s Wi-Fi settings. Now you’ll be able to remotely control the S3700, use its optical zoom and snap images. There’s only a small time lag for controls to take effect, and the wireless range is long enough for most practical scenarios. You can also download images off the S3700 to your mobile device for viewing or sharing, with a full-resolution photo taking around twelve seconds to transfer.

Other aspects of the camera are just as easy to use. All its scene presets and shooting modes are accessed by pressing the Scene button on the rear panel. The corresponding quick-access menu includes the default Scene Auto Selector mode which automatically detects the type of scene you’re focussing on and applies the best settings to capture it. Second on the menu is a sub-menu containing sixteen manually selectable scene modes, including Nikon’s Panorama Assist mode. Next is a batch of nine filter effects that’ll help you get creative with your photography, and then there’s the Smart Portrait system.

Activate this and when you snap a shot containing a face, the camera will automatically soften skin, apply digital foundation make-up, soften the entire image, and adjust colour saturation and brightness. You choose the intensity for each setting beforehand by pressing the arrow buttons on the rear directional dial. The system works surprisingly accurately, although it’s best to steer clear of some of the more extreme settings if you want flattering shots rather than cartoons.

Alternatively, if you’d rather apply these effects to a previously captured image, find the shot in playback mode and press the Menu button on the rear panel. Scroll down to Glamour Retouch and even more touch-up options are available, including chin size adjustment, skin glare reduction, adjustment of eye size, colour, whiteness and under-eye bags, plus options to redden cheeks, add mascara and apply lipstick. Providing your subject is directly facing the camera and fills most of the frame, these effects are targeted accurately at the relevant facial features and can be quite useful, but are great for a laugh as well.

The Smart Portrait mode also includes a nifty feature called Smile Timer. Select this by pressing the self-timer button on the rear panel, then press the OK button alongside it. The S3700 will then detect a face and only fire the shutter when he/she smiles. This is also pretty effective, although the face needs to be fairly prominent in frame and smile blatantly for the camera to detect it and fire a shot.

The final option available via the Scene button is the Auto mode. Think of this as a programmable auto setting, as when you press the Menu button in this mode, you get options for adjusting white balance, ISO sensitivity and the autofocus area. The camera’s continuous shooting mode is found here too, as are image size options. Switch back the default Scene Auto Selector mode and only the latter can be adjusted when pressing the Menu button.

Regardless of which auto mode you choose, you’ll still be able to adjust exposure compensation by pressing the rear panel control to the right of the OK button. This gives up to +/- 2.0EV of exposure compensation, which is reset to normal when you turn the camera off. This is useful in case you forget you’ve made an adjustment, but annoyingly the camera also resets the flash to automatic whenever you restart, which can often result in an unwanted flash burst when you’re not expecting it.

Autofocussing is also slightly temperamental. In good light the camera is capable of focussing almost instantly, but it’s also often prone to random bursts of focus hunting for no apparent reason. In low light things get even worse, with the camera usually taking over two seconds to find its mark and often not focussing at all, even with the aid of the focussing lamp.

At least the initial start-up time is usually rapid, capturing a shot in 1.6 seconds. Unfortunately the S3700 finds it tough to keep this pace up though, as the EXPEED C2 image processor can’t save an 8-9MB full resolution image instantly, so you’ll need to wait a second or so before you can view the photo you’ve just snapped. Still, the S3700’s performance is at least quicker than the sluggish Coolpix S2900, despite the two cameras sharing the same pixel count and image processor.