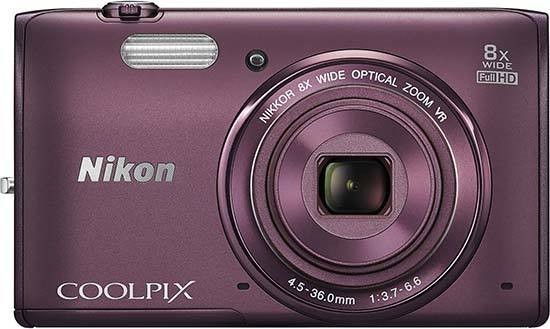 The Nikon Coolpix S5300 is a slim-line wi-fi enabled digital compact camera that also boasts a 16 megapixel CCD, 8x optical zoom and dynamic screen for easy use in direct sunlight. With these features and FullHD video and Hybrid VR, this could be the perfect camera for the budget conscious. Priced at around £135 / $180, the Nikon Coolpix S5300 comes in either plum or black.

For those of you who prefer to use a camera that's easy on the eye then the Nikon Coolpix S5300 could be a strong contender. It mixes up sharp edges with a curvy, concave front. The 8x optical zoom sits fully inside the casing so there's no additional lumps, making the S5300 extremely pocketable. On the top of the camera, the power button is a slim affair that sits flush so you don't accidentally press it instead of pressing the shutter release. The latter rises out of the casing like a squat chimney with a very small zoom ring surrounding it.

The back of the Nikon Coolpix S5300 employs the standard layout of the large LCD screen sat to the right with all the function buttons situated to the right. At the top, a small thumb rest allows you to hold the camera one handed but has a direct video record button close by for candid £250 moments. Below this, the rest of the buttons are laid out in the typical positioning of a navigation pad with four buttons surrounding it. As well as moving you up, down, left and right the navigation pad acts as access buttons for various other functions such as flash options, macro mode, self-timer and exposure compensation.

Should you want to employ the wifi feature of the Nikon Coolpix S5300, you do have to have a smart device close by such as a mobile telephone or tablet. The device must also have the Nikon Wireless Mobile Utility app installed. The app is available in the App Store on iOS as well as the Google Play store on Android. This does mean that the feature is fairly limited to whether you have a wifi enabled phone. Believe it or not, some people still don't.

Start up time from cold is either fast or slow, depending on whether you want to hear the simulated shutter noise as the Nikon Coolpix S5300 takes a picture. If you do, you'll be looking at speeds of 2.2sec to switch on, focus and take a picture. If not, you can enjoy incredibly speedy times of 1.3sec.

There are a couple of burst modes should you want to take pictures of action and not miss something. You have the choice of High and Low burst modes. In High burst mode, the camera will take around seven pictures in a one second period. These are at full size resolution so you don't lose image quality. In the Low burst speed, the camera plods along at a comparably tepid rate. It's still by no means slow, though. The S5300 managed to take 16 pictures in a ten second period which is around 1.6fps. That's pretty good for a low budget camera.

There are two menu systems on the Nikon Coolpix S5300. Press the green camera button and a small function menu will pop up on the right side of the screen. There are five options for putting the camera into various shooting modes such as Auto, Smart portrait, Digital effects, Scene modes and Intelligent scene. The latter will analyse the picture and select the appropriate scene to place the picture into. Depending on the mode will determine the amount of options available in the Main menu which is accessed via the Menu button at the bottom of the camera.

Press that and the Main menu covers the entire screen area. It's split into three sections. The first section splits the menu into four tabs to cover the primary functions of the Nikon Coolpix S5300; shooting, video, wifi and set-up. Select one of these and the centre section of the menu shows the various options available to you. The portion on the right is for any sub-menus that are accessed via the centre section. The Shooting section lets you change things like the resolution, ISO, AF area and white-balance. In the Video section, you can change the resolution, focusing mode, image stabiliser or wind noise reduction. The Wifi section helps you to find a wifi device, such as your smart phone while the Set-up changes less used features such as the Language, Welcome screen and Date & time.

The Main menu is cast in two shades of grey with light font on the darker grey and black on the light grey. A yellow band acts as a highlighter to display where you are in the menu system.

You can view pictures you've already taken by pressing the blue arrow button. You can do this regardless of whether the Nikon Coolpix S5300 is on or off. The most recently taken photograph will be shown on the screen with very basic information about the photograph flashing on-screen for a few seconds before disappearing. Press the blue arrow again and a playback version of a Function menu pops up and it allows you to restructure the order of your pictures, such as Date or Favourites.

The main Playback menu simply removes the shooting and video sections and replaces them with one playback section. The Wifi and Set-up menu remains. In the Playback section, you can create a slide-show to view the pictures on the screen, protect individual images (they won't be protected from formatting, though), rotate the images, copy them and even add D-Lighting or put them through a Retouch system. If you decide to retouch your photograph, the camera deals with it all, you just have to decide the intensity of the action. The camera will then save another copy, so you have the original still.

Open the box of the Nikon Coolpix S5300 and it's split into two halves. The top half holds the warranty card and a Quick Start Guide. Below that, you'll find the camera, a lithium ion battery, charging unit, UK plug adapter, wrist strap and USB cable. The full manual is now available for download on the Nikon website along with a basic editing system, should you desire or need one. Nikon have began to do this recently in order to reduce the amount of packaging and CDs that are used. Holding the instructions on a PDF on a server is infinitely better than distributing a plastic disc with every camera.