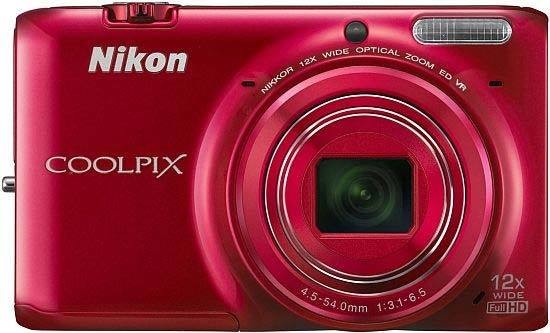 Unless otherwise stated, all pictures were taken at full resolution at the highest compression rating, which is indicated by the star next to the resolution in the Main menu. A fine setting picture records between 7.3Mb and 7.7Mb. Knock it down to the normal recording setting and that will roughly halve.

After we tested and posted the Nikon Coolpix S6400 in May 2013, we expected the noise pictures on the S6500 to be about the same. We were looking for low ISO to be ok and high ISO to be awful. What we got was this: Low ISO shots on the S6500 are, in fact, excellent. There's absolutely no noise whatsoever and edge sharpness is exquisite. The results stay pretty much the same through ISO 200 with only a slight increase in noise reduction at ISO 400. On our test shots, the texture of the bellows on the old camera starts to get smoothed out and there's a very mild hint of salt and pepper noise.

Colour noise doesn't really start to come into the shots until around ISO 800 and then it's tolerable. This is all when viewed at full magnification. If it's viewed at a normal viewing distance, these changes aren't noticeable. Interestingly, we noted that the S6400 was “like using a different camera” at ISO 800 because the noise was so bad compared to ISO 400. There's no such problem here and these results are arguably better than what should be expected from a small sensor.

At ISO 1600, the edges are starting to deteriorate and details are all but gone from the image thanks to noise reduction. Red and green blobs are covering the darker areas, but the camera is managing to prevent it from leaking onto the mid-tones. It can't help the picture at ISO 3200, though and noise has started to cover the picture in the lighter areas too. Still it's a lot better than what we expected.

The Nikon Coolpix S6500 has 2 different image quality settings available, with Fine being the highest quality option. Here are some 100% crops which show the quality of the various options, with the file size shown in brackets.

The improvements on the noise performance means that should you want to add a little sharpening to the pictures in an editing suite such as Adobe Photoshop, it won't ruin the picture. Previous models have simply had the noise exacerbated by the sharpen tool, so it's refreshing to see them actually improve.

We struggled to find chromatic aberration in the Nikon Coolpix S6500's pictures. Instances we found it were faint lines on high contrast edges and at the extreme edges of the frame.

The close focusing facility of the Nikon Coolpix S6500 is only 8cm. That's pretty far away by today's standards. Saying that, there isn't really a “good” and “bad” macro distance. We've all simply grown to expect to have the glass of the lens touching the subject. Sometimes it's simply not viable. It will let you zoom in a little and still focus close, but it's not a lot. Image quality deteriorates towards the edges of the frame. The bonus is that barrel distortion is less likely as you get further away from the subject.

There's a little vignetting at wide-angle which isn't removed by using the flash. Zooming in also still has a little vignette at the extreme corners, and the flash simply makes it easier to see it. The flash is pretty intelligent though, because it simply stabilises the light and makes it look natural which is what you need, not someone with a bleached out face.

We didn't get any red-eye from the Nikon Coolpix S6500, even when it was turned off. It's funny because the flash is situated quite close to the lens and red-eye is caused by flash light bouncing off the back of the retina and reflecting back into the lens.

The night scene and auto modes both gave the exact same results in the night time test shot. The aperture, shutter speed and ISO were all identical. The added advantage of shooting in Auto is that if you desire, you can adjust the white-balance. WE did this by using the Manual set and it came out off kilter. It tried to balance the deep yellow of the street lights and came out a pale yellow. This is turn sent the blue dusk sky an even deeper blue.

If you shoot using the Night scene mode, you can choose between hand-held or tripod. The hand-held option will use a higher ISO and faster shutter speed to compensate you not stabilising the camera. The tripod mode will slow everything down to get a smoother shot.