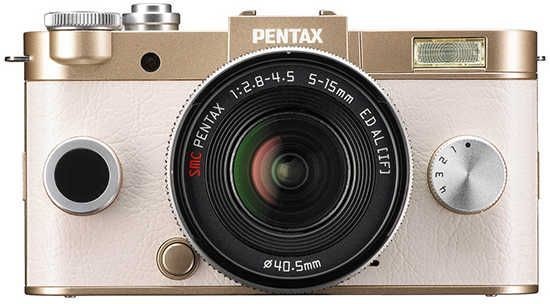 The Pentax QS-1 was announced back in the summer of 2014, and is the latest in Ricoh’s range of super small interchangeable lens cameras. At the time of its release, it was claimed to the the world’s smallest interchangeable lens system, and this seems to remain true for now. The Pentax QS-1 is compatible with the Q-Mount system of lenses, and features a 12.4 megapixel 1/1.7 inch Backlit CMOS sensor. Other features include a 3 inch TFT LCD, 460,000 dot colour monitor, SD card compatibility, full HD video recording and an ISO range between ISO 100 and 12800. As is common for many Pentax cameras, the Pentax QS-1 is available in a huge range of different colour varieties - both for the body and the lens itself, to create 40 different colour combinations. The Pentax QS-1 retails for $499.95 / £379.99 with a standard 5-15mm kit lens.

As you would expect, the body of the Pentax QS-1 is very small indeed, but the standard kit lens protrudes pretty far from the front making the camera unable to fit in your jeans pocket - if you’ve got a reasonably large jacket pocket you might be able to just about squeeze it in though.

Despite its small size, the Pentax QS-1 is equipped with a fair buttons and dials. On the top of the camera, you’ll find a mode dial for choosing between the different exposure modes the camera offers, such as aperture priority, shutter priority and fully automatic. You’ll also find movie mode here.

Along with this dial there’s the shutter release button, which is fairly raised up from the camera body itself. There’s also the on/off switch and a second dial which performs various tasks depending on the shooting mode you’re in, or what you’re doing with the camera.

On the top left hand side of the Pentax QS-1 is the playback button, along with a switch for making the camera’s flash pop-up. Immediately after you’ve taken a photo, it can sometimes take a little while for the playback button to be responsive - something to bear in mind in case you press it a few times thinking it doesn’t work.

Finally on the top of the camera is a hotshoe, to which you can attach external accessories should you wish, such as a flash or a viewfinder.

Moving to the back of the Pentax QS-1, all of the buttons are grouped on the right hand side of the camera. The first button you’ll see is the +/- exposure compensation button, which is of course used to alter exposure compensation when shooting in automatic and semi-automatic modes. It can also be used to switch between shutter speed and aperture priority when in manual mode.

Press this button once, then use the scrolling dial on the top of the camera to make the adjustment to the setting you need. If you’re in aperture priority or shutter priority, simply scrolling the dial on its own will adjust aperture, or shutter speed. Just underneath this button is a green button which has a couple of different functions, and also doubles up as the delete button when in playback.

There’s also a traditional four-way navigational pad. Each of the directional keys is assigned to a specific function. The up button accesses ISO (sensitivity) control, the left flash functions, the right timer functions and down white balance. With ISO, press the ISO button and then you can either set the automatic range by using the scrolling dial at the top of the camera, or you can pick a specific ISO setting, by pressing down and scrolling to the one you need, such as ISO 800. For white balance, press the down key and scroll along to the particular setting you need - or leave it on automatic if you prefer.

In the middle of the four way navigation pad is an OK button. Press this and then use the directional keys to change the autofocus point. You can change the size of the AF point by using the scrolling dial at the top of the Pentax QS-1, which is useful if you’re photographing something with fine detail. You can also use the green button to quickly return the focus point to the centre of the frame.

You can also choose to use manual focusing by selecting this option in the main menu. Activating focus peaking means that when you twist the focusing ring around the lens, areas of highest contrast - and therefore usually the areas of best focus - will be highlighted on the screen.

In order to reach the settings you’re likely to change most often, you can press an info button at the bottom back of the Pentax QS-1. This gives you access to settings such as metering, aspect ratio, custom image and so on. Simply use the navigational keys to move to the setting you want to alter, the use the scrolling dial at the top of the camera to make the change.

The final button on the back of the Pentax QS-1 is the main menu button, which you use to access all of the camera’s settings, including those which you won’t find in the quick menu. The menu itself is reasonably easy to follow, being separated into different sections. There’s also a section which you can customise if you often find yourself wanting to change a  particular type of setting and want quicker access to it.

On the front of the Pentax QS-1 is a dial which is marked with a dot and the numbers 1-4. By default, this dial controls “Smart Effect”, which means that if you move between the numbers a different digital effect will be applied. You can also customise this dial to other functions, such as aspect ratio, focus method, focus peaking and ND filter.

On the opposite side from this dial is another fake dial, this is useful for helping to grip onto the camera, but doesn’t turn or provide any other function other than to balance out the appearance of the front of the camera.

When in shooting mode, the screen will display a number of different icons to represent the different settings, for instance across the top of the screen, you’ll see the exposure mode, whether the flash is on or off, white balance setting, file type and so on. A useful display is the digital level - two bars show both horizontal and vertical straightness can be used to help you get level horizons - simply line up the camera until the line inside either one or the bars turns green.

The screen itself is fairly bright and clear, and you get a good view of the scene you’re photographing with a minimal amount of reflection or glare unless you’re in extremely bright sunlight.