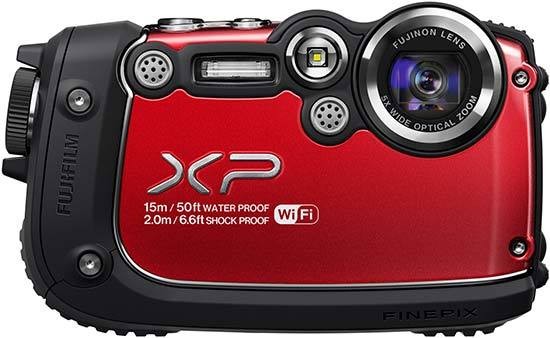 The Fujifilm FinePix XP200 is a rugged digital compact camera designed for use outdoors. It features a 16 megapixel CMOS sensor, 5x optical zoom and wi-fi connectivity wrapped up in a casing that's waterproof, shock-proof, freeze-proof and dust-proof. Priced at around £230 / $300, the Fujifilm FinePix XP200 is available in black, blue, red and yellow.

The Fujifilm FinePix XP200 continues the lineage of tough, waterproof cameras from Fujifilm. It looks very much the same as its predecessors. It has a fat, bulky body with a lens sat in the top right corner. An array of lights and microphones surround it. The 5x optical zoom is internal, to ensure waterproofing. It's likely that it uses a sideways lens element that consists of a periscope type mirror directly behind the outer element. The sensor will either be to the side of the periscope mirror or at the bottom of the camera. A zoom lens element will then slide backwards and forwards (or up and down, depending on the location of the sensor) to operate the zoom.

Of course, for serious photographers, this can open up a proverbial can of worms leading to questions about the quality of the glass that makes up the mirror and whether it distorts or disperses light. Then there's the water tight glass protecting the front element. Does it use ED technology? Is it as good quality as the front element? The end should justify the means, of course and – to coin another analogy – the proof will most certainly be in the pudding.

So the rest of the Fujifilm FinePix XP200's body looks to be exposed to the (not lens) elements with open buttons and LCD screen, not protected by sheets of plastic, like in the olden days. On the back, the screen covers most of the area with buttons squished to the right side. Interestingly, Fujifilm have opted not to use overly large buttons which means if you're using gloves in the cold or underwater, this could make changing modes or simply activating the flash more difficult.

For the XP200, Fujifilm have decided to go with a CMOS sensor over the traditional CCD. It's a type of sensor that's fuel efficient and also good with video. While the XP200 records in FullHD, it's only 1080i. There are two types of video interlaced (i) and progressive (p). Interlaced works by flashing alternate layers of pixels on to the screen twice every frame. It's this style of projection you can see if you film a computer screen and it flickers. The progressive style refreshes each pixel simultaneously. There's been arguments that progressive is smoother than interlaced but a lot of televisions still work by interlacing. That means that you have immediate compatibility. However, movement in the frame while interlacing is working causes a mismatch of lines and can ruin sharp video images. There's ways of editing this, but it takes a lot of patience, the right equipment and a lot of processing power.

Let's face it, you're unlikely to see the problem unless you're magnifying the video quality after running it through an editing suite and breaking it down frame by frame. So, to give you some good news, the Fujifilm FinePix XP200 runs video at 60fps (frames per second). Video normally runs at around 30fps (29.97 to be precise) and because you're doubling the amount of frames you want to squeeze into a second of filming, it takes twice as long to show it. Ergo, you have slow motion video in a camera that can go almost anywhere.

A lot of cameras are coming fitted with wi-fi at the moment. While it's being labelled as the newest gimmick, it can't really be a bad thing, can it? You have the opportunity to transmit your photographs online, via an app on your smart phone (reduces resolution to 3 megapixels), to your email account or to social media sites such as Facebook, Picasa or Flickr. You can also wirelessly transfer them to your computer using the PC Autosave software. That's pretty cool, because it means the memory of your camera is only limited to the amount of space you have on your computer. You can also upload images to your smart phone or tablet as well as view pictures that are on the camera by using your smart device.

As with all waterproof cameras, the Fujifilm FinePix XP200's build is very good. It's a sturdy camera and has a beefiness to it that comes with the extra padding. Selected areas are covered in rubber which not only looks and feels novel on a camera, but will also help if you drop it as well as gripping it underwater. To access the battery or memory card, you have to open the entire right side of the camera. It's operated via a wheel that has to be twisted while simultaneously pressing the button in the middle. Rubber seals lining the join prevent moisture seeping through. The twisting action prevents accidental opening and ruining the camera and battery in the wet. Although, the memory card would still be ok.

There's only the Main menu on the XP200. It has two tabs for Shooting and Set-up. The Shooting tab has options for the mode you want to take pictures in, ISO, white-balance as well as the resolution and compression. On top of that, you can also adjust the focusing modes and video resolution. The set-up menu accesses more core features such as language options, date & time, geotagging set-up and volume. The Set-up menu is also where you input the wireless settings. It's a nice, easy to use menu system, but then Fujifilm always have been. It's critical on a waterproof camera to have the icons easy to understand and clear enough to see through goggles. After all, you can't open the manual when scuba diving.

Start up time from cold is pretty neat. We managed to get the Fujifilm FinePix XP200 on, focused and a picture recorded in just over 2 seconds. It normally takes an extra half a second. There are four continuous shooting modes (Low, Medium, High and Super High) along with three Final shot options. These are set in the Main menu, but to activate the continuous shooting mode, you have to press the button on the back next to the direct video record. Super high runs in small size and records 60fps. High runs at 9fps and will be ready for recording again after six seconds has passed. Using the High, Medium and Low settings will record at full resolution and the lower you go, the slower the frame rate is, but it records for a longer period of time.

Playback can be operated regardless of whether you have the camera switched on or not. Generally this can be an issue with having the lens stuck out, but not with the XP200. Images will be displayed full size with generic shooting information scattered around the frame. You can turn this information off if you wish. You can zoom in and check sharpness of the image by using the zoom button on the back. Press the menu button and you enter the Playback menu. Options to erase, edit, transfer wirelessly and search for pictures based on date, face, favourites, data or upload marker are all here. You can also create a photo book or slide-show if you want. Access to the Set-up menu is still provided, should you need it.

Alongside the camera, you get the charger which uses the USB cable to connect to the camera and charge inside the battery compartment. You also get the battery and wrist strap. The enclosed CD contains the full user's manual and MyFinePix Studio ver. 4.2.