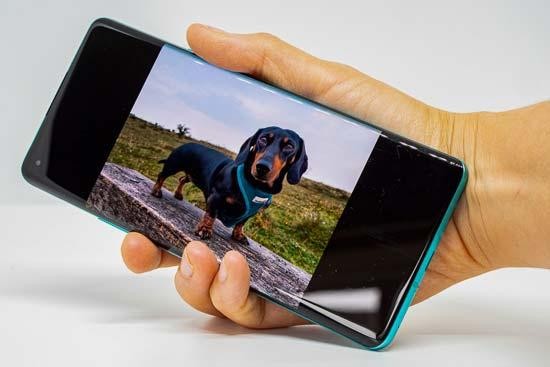 Launched on to the market back in April 2020, the OnePlus 8 Pro is the latest flagship smartphone from OnePlus.

It has a similar camera setup to last year’s OnePlus 7 Pro model, but with an upgraded ultra-wide camera. It has a quad-camera setup. The main camera is a 48 megapixel sensor with a 25mm (equivalent) f/1.8 lens.

It is joined by a telephoto lens offering 3x zoom, f/2.4 aperture and backed by an 8 megapixel sensor, plus an ultra-wide (14mm equivalent) f/2.2 aperture lens with a 48 megapixel Quad-Bayer sensor.

The final camera is a 5 megapixel f/2.4 lens offering, but it is a “colour filter” camera, and is therefore not one you can actually select when shooting.

Other interesting specifications of the OnePlus 8 Pro include 4K video recording at either 60 or 30fps, super slow-mo capture, a pro mode which includes the ability to capture images in raw, a 16 megapixel front-facing camera and a Dual LED flash. The screen is a 6.78-inch “Fluid” AMOLED with 3D Corning Gorilla Glass.

The OnePlus 8 Pro uses the Android 10 operating system, with an Oxygen OS “skin” over the top of it.

We’ve been using the “Glacial Green” colour way of the OnePlus 8 Pro, which is more like a turquoise colour. The matte finish and the rounded edges give the device a very stylish look and feel.

The phone is quite long, but not too wide, so it’s still comfortable to hold one-handed. Those with smaller hands may struggle to reach the outer corners of the phone, but while typing messages and so on, you’ll mainly be using the bottom half of the screen so it may not be too much of an issue for you.

When you want to take a picture, you can launch the native camera application directly from the lock screen by swiping up from the bottom right hand corner of the screen. As we’ve seen before, the OnePlus 8 Pro has a pleasingly well-functioned native camera, with lots of different shooting modes to choose from.

By default, the app launches in the standard “Photo” mode, which is what you’ll probably find yourself using in the majority of situations. Along the bottom of the screen you’ll see the different zoom options.

The lenses are represented by trees to show how wide the lens is - for example three trees for the super wide angle lens, two for the standard lens, and one for the telephoto lens. As soon as you tap on them, it will show as “0.5x”, “1x” or “3x”.

Along the top of the OnePlus 8 Pro's screen, there’s a number of different options to choose from. Going from left to right, you have a timer icon which gives you access to a self-timer, a flash icon which allows you to switch the flash on, off or se tot auto.

A small flower icon is used to indicate macro shooting, which the camera should automatically detect if you get very close to a subject - at which point you can also choose to switch it off if you like.

Finally there is an icon which you can tap to add a digital filter to your images, which includes “Photocrom”, a mode which takes advantage of the colour filter camera to produce an infrared type image.

You can tap around the screen to select a focus point. Once you tap on the screen, you’ll also see a brightness icon. If you move your finger up and down the screen you’ll be able to adjust the brightness of the scene. A lock icon will also appear so you can lock AF/AE, then recompose your image.

Other shooting modes are displayed along the bottom of the camera app interface. To the left of the standard Photo mode you have Time-lapse, Panorama, Slow Motion and Video - all fairly self-explanatory modes.

It’s worth pointing out that when shooting in the OnePlus 8 Pro's video mode, you can select a range of different frame rates and resolutions, including 4K, Full HD and 30p and 60p.

To the right of the standard Photo mode you have Portrait - which allows you to create shallow depth of field effects, whether shooting human subjects or otherwise, Nightscape, which is for shooting in low light conditions (i.e. at night). The final mode you’ll come to is the Pro mode, which is likely to be appealing to enthusiasts.

In Portrait Mode, you can choose between a wide option and a telephoto option.

The second is good for single-person portraits or for where you want the main focus of the image to be the subject entirely.

You’ll also see that at the top of the screen there’s a few extra options. There is a timer, the option to save custom presets - which is pretty useful if you’re often using the same settings or shooting the same type of scenarios - plus the option to shoot in raw format.

If you have opened the camera app from the lock screen, you won’t be able to make deeper settings changes. If you unlock the phone first, you’ll see that a small rectangle with “Settings” appears in the top right hand corner of the screen.

In this deeper settings menu, you’ll find a range of different options - including different settings for the various shooting modes. For example, you’ll be able to switch on a Histogram for shooting in Pro mode, or adjust aspect ratio in the standard Photo mode.