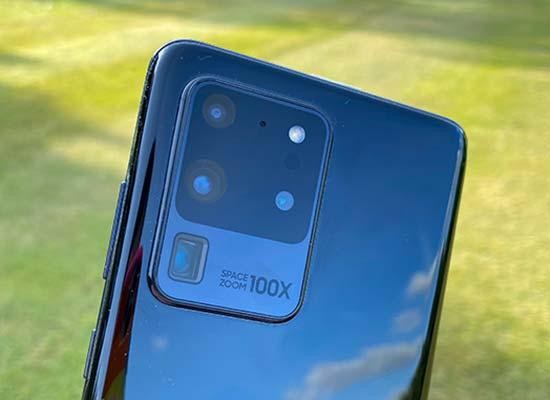 The Samsung Galaxy S20 Ultra sits at the top of Samsung's line up of premium smartphone offerings, with the quality of the camera being central to the marketing of the device.

Although the telephoto lens represents just over a 4x optical zoom, there's also a 10x 'hybrid optic' zoom, which combines digital with optical zoom, as well as the even more impressive-sounding 'space zoom', which promises to deliver 100x zooming capability.

On the front of the Samsung Galaxy S20 Ultra is a 40 megapixel selfie camera. Other interesting features include a 6.9-inch AMOLED screen, 5G connectivity, a 5000 mAh battery and an inbuilt memory of either 128GB or 512GB.

The Samsung S20 Ultra is by no means a cheap device. At the time of writing, it retails for around £1,199 for the 128GB version. This puts it in direct competition with the likes of the iPhone 11 Pro, but is certainly expensive by most Android standards.

The first thing you're likely to notice about the Samsung Galaxy S20 Ultra is its very large size. With a 6.9-inch screen, it is Samsung's largest phone - some may field it unwieldy. It's certainly true that this is a very difficult device to use with just one hand. On the positive side, the AMOLED display itself is stunning, taking up the entirety of the device front, save for a very small cutout for the front-facing camera.

Naturally, being so large, it's also a great device for showcasing your images and videos in the best possible way, as well as making some apps a joy to use.

The camera unit, housed on the back of the phone, sticks out from the main part of the device. The Samsung Galaxy S20 Ultra is available in either 'Cosmic Black' or 'Cosmic Grey'. We've been using the Cosmic Black version, which is incredibly sleek and shiny.

You can launch the native camera app by swiping upwards from the bottom right hand corner of the lock screen. As we've seen with previous Samsung devices, the native camera app is very well equipped, giving you lots of shooting options to work with. By default, it will launch in the standard 'Photo' mode, which you'll probably find you want to use for the majority of your shots.

At the bottom of the display, you'll see your zooming options, for moving between the different lenses the Samsung S20 Ultra offers. They are represented by tree icons, with three trees for the widest angle lens, two trees for the standard lens, and a single tree for the zoom lens. You can also zoom in and out by pinching to zoom on the scene. When you do this, you'll see a number of quick options to jump to various settings, including 0.5x, 1.0x, 2.0x, 4.0x, 10x, 30x and 100x. If you want to zoom to a setting outside of these quick options, simply pinch in or out to achieve the desired setting.

You'll also see displayed the option to switch on or off the automatic scene optimiser. This uses artificial intelligence to judge the scene in front of it to make adjustments as necessary.

A number of other options are displayed at the top of the screen. A cog icon can be tapped to access a main menu to make more extensive changes, including changing the video size and resolution. There's also a flash icon (with options here being flash off, flash on, or flash automatic, for the phone to decide if it needs to activate a flash), a timer option, a ratio option (which includes the option to turn on 108MP shooting), a motion photo option (whereby the phone will record a short video clip with a still) and a magic wand icon which you can use to add filters to your images.

The option to shoot at 108MP is included because, by default, the Samsung Galaxy S20 Ultra outputs images at 12MP. If you attempt to photograph something with a lot of detail, you may see a notification pop on screen asking if you'd like to switch to 108MP mode, which can be very useful for shooting scenes which would benefit from a lot of fine detail.

Along the bottom of the screen, you'll see a number of other shooting mode options which you can choose from. To the left of Photo Mode is 'Single Take'. This is quite a fun mode which takes a number of different shots and video with different crops, effects and filters applied to it. It can be quite a fun way to shoot a subject when you want to try something creative.

To the right of Photo mode, there's Video, which is fairly self-explanatory, and 'More', where you'll find a range of different shooting options, including Night (for low light shooting), Live Focus (a mode which gives a shallow depth of field effect) and 'Food'. Most interesting to advanced photographers is the 'Pro' mode.

The Pro mode is something we've seen before on other Samsung models. With it you can control ISO, shutter speed, autofocus mode (or use manual focus), white balance and exposure compensation. You can also make adjustments to settings such as Temperature, Contrast and Highlights. Frustratingly, you can only use the main/standard lens with Pro mode, and you can't use the ultra wide angle or the telephoto lens. You can pinch to zoom on the screen, but this activates only a digital zoom, which produces significantly lower-quality results. On a more positive note, the Samsung Galaxy S20 Ultra can record raw format images, which will be good news for those who like to edit their shots in software such as Photoshop.

To go back to the Video Mode, here you've got a fairly simple set up. You can change the aspect ratio and quickly switch on 8K recording from the top of the screen, as well as turning on image stabilisation (it won't work with all resolutions, such a 8K). A good advantage of shooting in 8K is that you can extract stills after shooting - this is helpful when you want to photograph a moving subject and think you might otherwise miss the shot. In order to extract the still, you need to play back the video, and press the 'capture' icon.

Night mode on the Samsung Galaxy S20 Ultra is something that will automatically activate if you're shooting in the standard 'Photo' mode, but you can also switch it on from the 'More' section. In this mode, the phone will automatically decide how long it needs to shoot for, depending on how dark it is. It will take a number of short exposures over the given period and blend them all together to create the effect of a longer exposure.