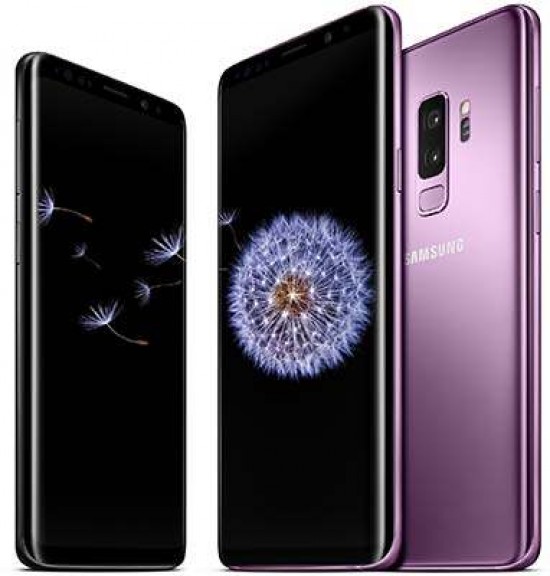 Samsung’s flagship smartphone was announced at Mobile World Congress, back in February 2018. Both the S9 and the S9 Plus were announced on the same day, with the S9 Plus being both bigger and having some additional features, particularly to the camera.

The larger Samsung S9 Plus has a 6.2-inch screen, and weighs around 26g more than the smaller S9. The screen is a Quad HD+ Super AMOLED screen with 529ppi.

Like several other line-leading smartphones, the S9 Plus has a dual camera set up. It has a wide-angle camera with a 12 megapixel 1/2.55” sensor, which is joined by a telephoto camera, also with a 12 megapixel sensor - but it is smaller at 1/3.6”. Only the wide-angle lens has the dual aperture option, giving you the choice between f/1.5 and f/2.4. The telephoto lens has an f/2.4 aperture.

Other features include 4K video recording at up to 60fps, super slow motion video at 960fps (720p), 10x digital zoom, and compatibility with Micro SD cards - the inbuilt memory is 64GB. The Samsung S9 Plus runs on Android 8.0 (Oreo).

The 6.2-inch screen of the S9 Plus makes it one of the larger smartphones on the market, but thanks to its bezel-less design (whereby the screen goes all the way to the edges of the device), it manages to stay just on the right side of ridiculousness. Still, you’ll probably find that you want to use two hands when typing out emails, or perhaps even to steady the phone when taking a photograph - the smaller, standard S9 may let you get away with holding the phone in just one hand more often.

The native camera app can be accessed quickly by swiping up from the bottom right hand corner of the home screen (or the top right if you’re holding the phone in landscape orientation). As we’ve seen in previous Samsung phones, the native camera app is pretty well specced, giving you lots of shooting choices and modes to work with.

All of the main modes can be seen along the top of the S9 Plus camera app screen. You’ve got Food, Panorama, Pro, Live Focus, Auto, Super Slow-Mo, AR Emoji and Hyperlapse. You can add or remove these modes from the main screen in the settings menu, if you find you never use a particular shooting mode. To move between these different modes, you can tap the text at the top of the screen, or alternatively, you can use a swiping motion on the screen to choose between them. This is very quick, but it’s also rather sensitive, leading to accidental mode changes when you may not want them. Similarly, you can swipe up and down on the screen to change between the front facing and the rear facing camera - this is also pretty sensitive and can therefore change when you may not want it to.

By default, the camera app launches in “Auto” mode, which is what you’ll probably want to use for the majority of your shots. As you’d expect, in this mode you don’t have a huge amount of options which you can change from the main screen. As standard, the camera shoots with the wide-angle lens, but you can tap the 2x icon if you want to access the telephoto camera instead. To activate the camera’s digital zoom, you can use a pinching motion on the screen - up to 10x is available. Along the bottom of the screen when in this mode, you’ll see that you can switch a flash on/off, as well as access some digital filters.

To actually take a photo, there’s a virtual shutter release button  seen at the bottom of the screen. Alternatively, you can use either the volume up or the volume down button to take a shot, if you prefer.

Whereas the standard S9 has a mode called “selective focus”, the S9 Plus has a similar mode which is called “Live Focus”. The reason for the disparity is that the S9 Plus is using two lenses to create a shallow depth of field effect, whereas the standard S9 does it all with software. When using the Live Focus effect you’ll need to hold the camera reasonably far from the subject - but it will let you know if it’s ready to shoot. If you get too close to the subject - or too far away - the screen will instruct you on what you need to do to make Live Focus work. Once ready, tap the shutter button to take your photo - occasionally you may find that you need to tap the subject of the photo as well to get it refocus, if the camera has accidentally selected the wrong subject (which is reasonably rare).

As you might expect, Pro mode gives you the opportunity to change a number of different parameters. You can adjust ISO, shutter speed, AF mode, metering, picture style and white balance. You can leave any or all of these on automatic, or adjust each of them accordingly as you choose. Unlike most other smartphone cameras, you’ve also got the opportunity to adjust the aperture - with either f/1.5 or f/2.4 available - use the wider (f/1.5) aperture in darker conditions to let more light in, or f/2.4 when you’re shooting landscapes or similar to let less light in. Unfortunately, there’s no option to shoot in raw format though. If you want to use the telephoto lens when in pro mode, you can’t access that directly through the pro mode - which is a bit odd. If you tap 2x in Auto mode, and then switch back to Pro mode, you’ll find that you’re shooting at telephoto, though - a bit of an odd workaround.

In order to record a video, you need to tap the video record button at the bottom of the screen - which appears in all the modes. You’ll find that if you tap it, it starts recording immediately, with no chance to compose your image first (it uses a different aspect ratio to that shown on the screen). If you want to compose first, if you hold down the record button, you’ll be able to frame the shot, then release the button to start recording. If you’re in the Super Slow-Mo Mode, there’s only a video record button available.

When using the selfie camera, you’ve got a few options to choose from here. There’s the standard selfie mode, which launches by default and takes a standard photo. To the left is “Selfie Focus”, which creates a shallow depth of field effect for your images, and there’s also AR Emoji, which you can use to create emojis from your face, and Wide Selfie, which is ideal for either group selfies, or for getting a lot of background in your selfies.