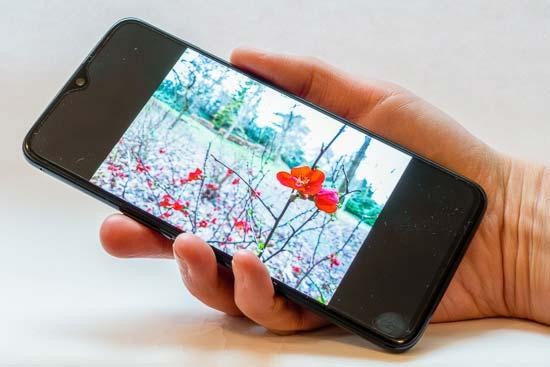 The OnePlus 6T is the previous flagship model from mid-range manufacturer, OnePlus. Announced in November 2018, it follows on from the OnePlus 6 which was launched in May 2018.

Some of the upgrades to the phone are relatively minor, being a bridging point between the older model and the recently announced OnePlus 7.

One of the big differences is to the display, which now features a much smaller notch design which takes up much less space than on the previous OnePlus 6 to make more use of the screen. A fingerprint scanner has also been embedded directly in the screen, too.

Both the front and rear cameras are the same as found on the original OnePlus 6, giving you a 16 megapixel and 20 megapixel dual f/1.7 device (which work together to produce your images, rather than being able to be used independently). The front camera is a 16 megapixel f/2.0 device.

Video specifications include 4K recording at up to 60fps, as well as super slow motion video.

Other differences to take note of are the removal of the headphone jack and a slightly increased battery life. You can buy the phone in two variants – 6GB RAM with 128GB storage, or 8GB RAM with 128 or 256GB of storage.

The OnePlus 6T has been kindly loaned to us by Vodafone, who offers the device on a number of different contracts. You can also buy the OnePlus 6T outright priced from £499.

Outwardly, there’s very few differences between the OnePlus 6 and the OnePlus 6T, while most elements of the phone’s operation also remain either the same or very similar. The biggest noticeable difference is the much smaller notch which houses the front-facing camera – if you’re someone who doesn’t like notch designs, you might be pleased to see a reduction in size.

Included in the box is a screen protector (ready fitted to the phone), plus a rubberized case for the phone. Both of these things detract from the sleek lines and cleanest view of the screen possible, but it is probably a good idea if you have a tendency to drop or scratch your phone. Other phone cases can be bought separately, too.

The camera itself is the same as found on the OnePlus 6. That means, that it uses a dual camera setup, with one 20 megapixel sensor and one 16 megapixel sensor. Both sensors are joined by an f/1.7 lens. Unlike other phones on the market, such as the iPhone XS or the Huawei P20 Pro, the second sensor/lens is not used as a zoom, but instead to help with detail, as well as when using the One Plus 6T’s portrait mode.

Using the OnePlus 6T's camera is very simple. To access it, you can swipe up from the bottom right hand corner of the lock screen (when holding the phone in portrait orientation) to go straight into shooting mode. By default, it will open in the Photo mode.

If the phone is already unlocked, there is an icon on the home screen, again found in the bottom right hand corner by default through which you can access the native camera app. The native camera app has a reasonable degree of flexibility, offering a simple interface, which can be expanded if you want to get a little more advanced.

Another way to launch the camera app is to double tap the power button in quick succession. You can also set the OnePlus 6T to automatically take a photo when the camera app launches, too, if you prefer.

As standard, there are four modes to shoot from which are displayed along the bottom of the camera app. These are Photo, Video, Portrait and Night, which can be moved between by swiping right or left on the screen, or tapping the word of the mode.

When in the standard Photo mode, your options are fairly basic, but you can choose between three different aspect ratios (4:3, 16:9 and 1:1), as well as switching on or off a self timer and a flash. You’ll also see “1x” in a circle – tap this to zoom to 2x (but note that this is just a digital zoom). Alternatively, you can pinch outwards on the screen to activate the zoom, beyond the standard 2x offered.

You can tap around the screen to change the focus point, which will also have an effect on exposure, depending on the light underneath the active focus point. If you want to adjust brightness further, a slider pops up just next to the focus point selector, which you can use to increase or decrease exposure brightness.

If you swipe up from the bottom area of the screen, you’ll be presented with some additional shooting options to take advantage of, such as Time-lapse, Panorama and Slow Motion. Perhaps the most interesting to most photographers, however, is the “Pro” mode.

With this mode you can change a number of shooting parameters, such as ISO, white balance, shutter speed, focusing and exposure compensation. You can also switch on raw format shooting, too (which will be in the universal DNG format). A level, to help you ensure that landscape shots are straight, also appears when shooting in Pro mode (and does not in standard Photo mode).

Also in the Shooting Mode menu, you’ll find the Settings menu, whereby you can change of number of the camera’s key settings. Some of the settings are General, such as “Store location data”, which others only apply to certain shooting modes, such as Portrait and Pro.

Going back to the standard shooting view, Portrait mode is something that we’re starting to see on almost all current smartphones. In essence it creates a fake shallow depth of field effect to imitate the look of shooting with a DSLR or large-sensor camera.

To use it is fairly simple, you simply point the OnePlus 6T at the subject you want to shoot – despite the name, it doesn’t have to just be humans, or even living things, you can also use it to create shallow depth of field effects with still life subjects, such as food. It’s important to make sure the camera has selected the subject you wanted it to – so it’s worth tapping to ensure the focus point is over the correct part of the frame.

If there’s not enough light in your shot, or you’re not close enough to the subject, a warning will display on the screen to warn that the effect can’t work. In the settings menu, you can set the OnePlus 6T to additionally save a “normal” version of the photo – without the shallow depth of field effect applied – it’s worth doing this just in case something goes wrong with the effect. Unlike with some other devices on the market, it’s not possible to choose a different focus point during the editing process, or to increase or decrease the background blur.

Night mode is something we’ve seen in a few different phones of late – including the Huawei Mate 20 Pro and the Google Pixel 3. Here, the Night Mode is the same as found in the Pixel 3, shooting a set of images and merging them together – there’s no need to use a tripod to keep the phone steady.